Image
St. Tammany Humane Society helps a pit bull terrier after the Louisiana flood in the summer of 2016.
By Nicole Hamilton

Best Friends has network partners in every single state, and all of them are saving lives daily. We never get tired of hearing their stories, and that’s why we want to share them with you, too. So today, we're proud to present one from St. Tammany Humane Society in Covington, Louisiana.

Once the rain started falling one hot August morning in southern Louisiana, it didn’t stop. By the afternoon, a young pit bull terrier named Maurepas and some other dogs found themselves in a building that was flooding too quickly for anyone to go in and rescue them.

Maurepas was brought there from a local municipal animal shelter, where her chances at finding a home were low. She’d been taken in by a local animal rescue group that placed her in boarding while they worked to find her a new home. But her safe place was now in danger.

That night, Maurepas waited quietly in a building destroyed by the flood, but help was on the way. As the sun rose the next morning, the rain had let up enough for rescue operations to get underway.

Soon, Maurepas and her fellow dogs were spotted by local police. With the help of members of the area’s beloved “Cajun Navy,” a group of volunteers who traveled by boat through flooded streets to help local police save lives, Maurepas was rescued and taken to St. Tammany Humane Society (STHS), a Best Friends No More Homeless Pets Network partner. There, volunteers acted fast to give her food, water, a place to rest and the support she needed to feel safe and secure.

In the following days, the clouds would begin to reveal a silver lining for the young pit bull terrier. That’s because Maurepas had originally been in municipal shelter in a county with a low save rate. In fact, the flood may have upped the odds for her and given her a better chance at being adopted. 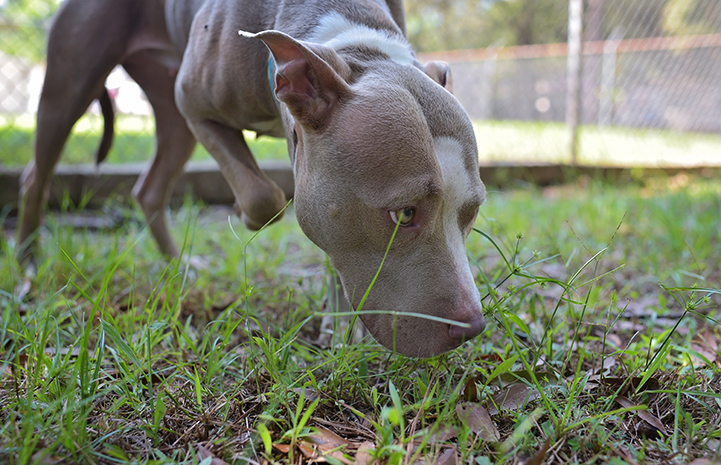 After the flood: An outpouring of support

“We came together with one goal: to give the animals the second chance they deserved.” says Scott Bernier, executive director of St. Tammany Humane Society.

As the rains came down the day of the flood, Scott began to receive reports that nearby shelters were fast becoming inundated with water, a clear sign that the lives of hundreds of homeless pets were in danger. Recalling the devastation from Hurricane Katrina, Scott and his team, which included dedicated volunteers, got to work organizing efforts to save the community’s pets.

They set up an area in the shelter’s parking lot where neighbors could drop off much-needed pet supplies and food. Eventually, donated goods were piled so high that Scott and volunteers started driving through the community, dropping off donated food and supplies to homes damaged by the flood.

They also began working fast to move pets located at STHS before the flood to nearby shelters outside the flood area, in order to make room for stranded homeless pets, including Maurepas.

A loving foster home for a deserving dog

Just days after the flood, STHS began hosting adoption and foster events for the displaced pets. So many people wanted to help that they were lined up down the block, waiting to meet dogs in hope of giving one a foster or forever home.

Alane Lumenais was one of those people waiting in line at one of the very first adoption events. Alane came looking for a dog to foster, and when she saw Maurepas and noticed the dog would wag her tail whenever she spoke to her, she knew Maurepas would feel comfortable at her house.

That night, Maurepas got to do something she hadn’t done in a long time: fall asleep knowing that when she awoke, she’d be cozy and safe in a loving home. 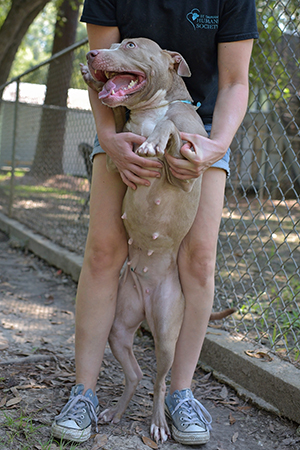 ​Maurepas quickly showed Alane that not even a flood of historic proportions could permanently rattle her sunny disposition. As she watched Maurepas play with her son, she herself couldn’t help but take on a little bit of Maurepas’ sunny disposition.

Alane dutifully brought Maurepas back to adoption events at STHS, believing that it wouldn’t be long before someone wanted to bring the sweet dog home permanently. She even penned a sweet note about Maurepas for potential adopters, so that anyone who met her would know what a special dog she truly is.

Sunny days are ahead

Maurepas eventually caught the attention of Jennie Weaver, who came to an adoption event after her husband met Maurepas on a work-related visit to STHS.  The couple had been looking for a companion for their dog, and her husband thought Maurepas fit the bill. “I think I found our new dog,” he announced to Jennie later that evening as he walked in the front door.

As soon as Jennie met Maurepas and read Alane’s note, Jennie knew her husband was right. Maurepas was indeed their new dog. Finally, the forecast was looking good for this sweet girl. Maurepas was finally going home.

Now, with the flood far behind her, she’s enjoying a happy home for the holidays. Since the dog came home with them, Jennie says the family is learning a very important lesson through Maurepas — the importance of having faith in the future.

“Maurepas went through something terrible, but she is always happy,” says Jennie. She reminds us to never give up. No matter how difficult things are, you can always pull through.”

Best Friends’ No More Homeless Pets Network comprises more than 1,600 animal welfare groups from every single state, all working to save the lives of pets in their own communities. Ranging from animal shelters and rescue groups to spay/neuter and trap-neuter-return (TNR) organizations, they collaborate with Best Friends to save even more lives in every corner of the country. Best Friends provides marketing help, fundraising events, information, webinars, guidance, grants and other services, so that, together, we can Save Them All.