A tale of two golden eagles

When local law enforcement officials in a small rural town in Arizona responded last summer to a call about an injured bird, they found a golden eagle on the ground, unable to fly. After checking with the Arizona Game and Fish Department, the eagle was transported to Best Friends, the nearest licensed wildlife rehabilitation center, just across the border in Utah.

Carmen Smith, manager of Wild Friends and head wildlife rehabilitator at the Sanctuary, recalls noticing that the eagle hadn’t eaten for a long time. Diagnostic tests revealed that the large raptor had West Nile virus, and she also tested positive for lead poisoning and traces of rat poison. The once-regal bird needed help, and a lot of it.

Because of the use of lead bullets by hunters (despite the availability of lead-free bullets), many birds of prey suffer from varying degrees of lead poisoning. Eagles can pick up the lead while scavenging for food.

The very ill bird spent a month in the Wild Friends hospital, where she received excellent care. Little by little, she was able to hold her head up and eventually began to feel a lot perkier. Since she was a calm patient, it was easy to treat her twice a day with chelation therapy injections. Any liver or kidney damage was soon gone, and lead levels fell right down to zero. Within 10 days, she had gained two pounds, which is about one-third of her weight.

Over the next two weeks, the eagle was re-acclimated to the outdoors before being moved up to the large flight aviary, one of the few in the western U.S. big enough for eagles to regain their flying strength.

Looking for a friend

Now she just needed a friend to keep her company while she recovered. And right around this time, Debby Pappas, a licensed wildlife rehabilitator in central Utah who works closely with Best Friends, was treating a female golden eagle. The bird was doing well, but needed to refresh her flying skills in a large flight aviary.

The first-year female was recovering from injuries to a back toe and her left shoulder, perhaps caused by being blown into something by a strong wind. Once she recovered, she was brought to Best Friends in October and taken directly to the flight aviary to join the first eagle.

Because the first-year eagle had not yet have established her own territory, she could be released into any suitable habitat; however, the eagle from nearby Arizona, who might have a mate waiting for her to return home, would need to be released back into her own territory. Since she was found only around 45 minutes from Best Friends, this was well within her daily travel range, so both eagles could safely be released right from the Sanctuary. 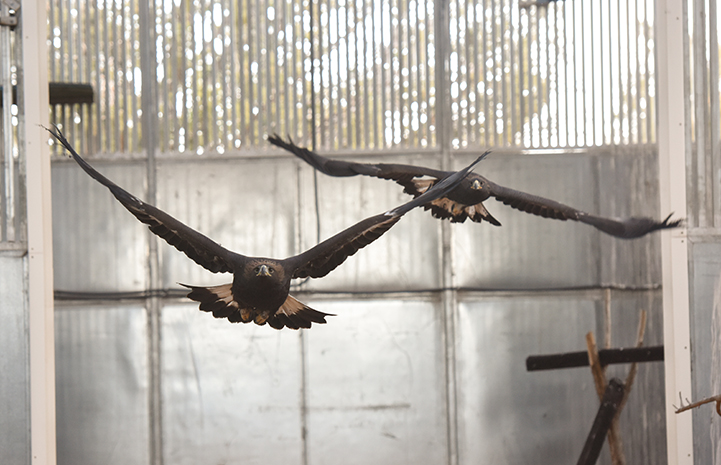 On a bright December day, both eagles were freed back to the wild. As the large door in the top of the flight aviary was pulled back, it didn’t take them long to see that there was an open space to fly through. They took to the sky. The first eagle headed west toward where she’d been found, perhaps back to her home and probably to her mate who would be overjoyed to see her. The second eagle flew east to set up her own territory and live a life of freedom. It was a very happy day for them both. 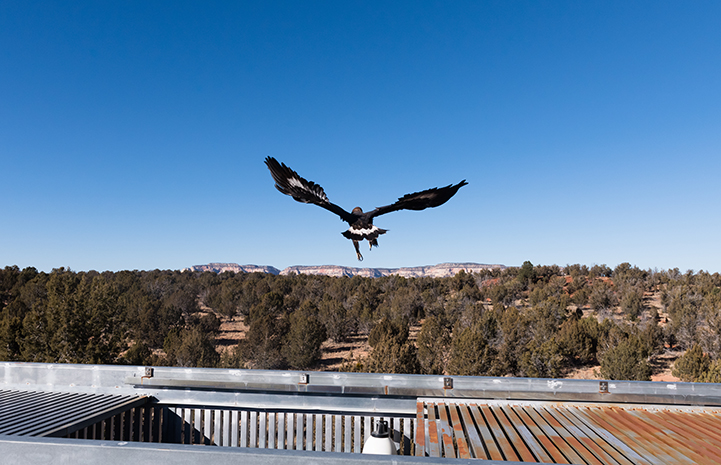