With his black body, white socks and pink belly, Moe is a handsome pig. He’s also surprisingly agile and focused as he walks in a circle around his caregiver, Rosalie Wind.

Moe follows his nose — or rather, he follows the tennis ball at the end of a stick, which Rosalie holds a few inches in front of his nose. That stick (with the tennis ball) is a target stick, and Moe is “targeting.” Targeting is a game that many of the pigs in Marshall’s Piggy Paradise play with their caregivers and trainers. It’s also a great training tool that can help turn potbelly pig behavior problems around. That helps them in all sorts of ways, making them happier and more likely to get adopted sooner. Plus, the pigs love it.

After Moe does three circles, he catches up to the ball, touches his nose to it and gets a tasty fig treat. Once he finishes his cookie, Rosalie holds the target stick out a little farther away from her body, so that Moe will walk in a larger circle around her, and off he goes again.

Teaching pigs a trick like targeting — where they not only learn to touch their noses to the target stick, but also to follow it as Moe is doing in the “circle game” — has many benefits.

The training can help pigs be more focused and confident. It can teach them important life skills that will help them get adopted. It’s a good relationship building tool that builds trust between a pig and trainer. It also helps to alleviate behavioral issues by channeling the pigs’ energy, teaching them boundaries and providing them with enrichment and mental stimulation.

Oftentimes, pigs come to the Sanctuary lacking proper socialization, perhaps because they were raised alone without other pigs. “In my experience, when pigs don't have the opportunity to socialize and interact with others of their own species, they can start to have problems with people,” says Jen Reid, manager of Horse Haven and Marshall’s Piggy Paradise. “It seems to happen because what is normal pig behavior and is OK to do with another pig (such as posturing and challenging for dominance) is not OK to do with humans. Additionally, humans often tend to unintentionally reinforce undesirable behaviors in pigs and allow them to escalate to the point where those behaviors become problematic.” 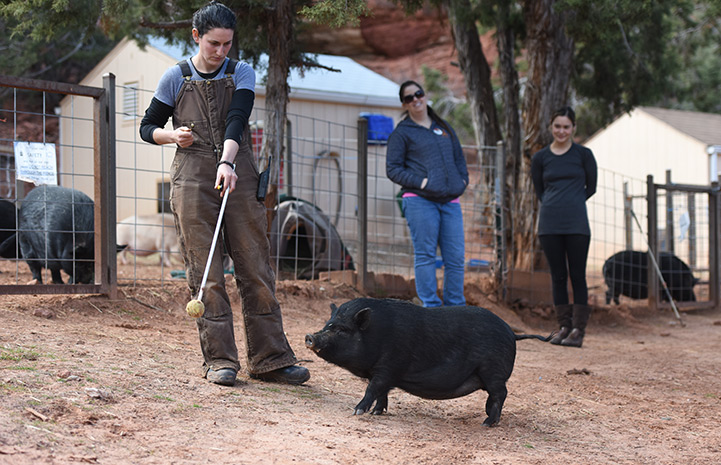 Seven-year-old Moe was the only pig in his previous home, so he’s had to brush up on his social skills since he arrived at the Sanctuary. Like Moe, Pickles is another pig who needed help with her social skills. She wasn’t even a year old when she came to Best Friends from another sanctuary, and she was as sassy as could be.

Pickles had no boundaries with people or other pigs, and would often push her way right into someone’s personal space. That behavior was eventually going to get Pickles in trouble. Left unchecked, it could have led to aggression toward people or a nasty scrape with an older, wiser pig.

Having Pickles spayed toned her sassiness down a few notches. Caregivers at Marshall’s Piggy Paradise also started engaging her with Parelli Natural Horsemanship games (which aren’t just for horses) to teach her boundaries in a friendly, non-threatening way. They also introduced her to target stick training.

In the meantime, targeting has helped to increase her focus and channel her energy. Now that she’s calmed down, Pickles has built strong relationships with people and learned to live peacefully within the Sanctuary pig community. 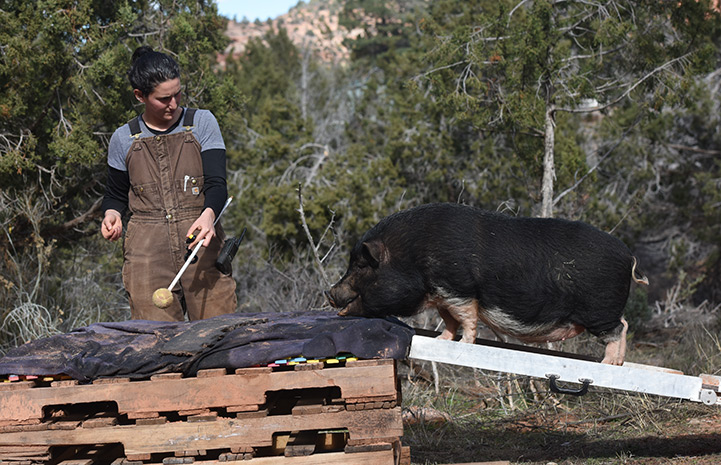 Besides Pickles and Moe, targeting has helped boost the confidence of a shy pig named Jasmine. She’s praised and rewarded for every training success, so rather than being uncertain, Jasmine knows she’s got this.

Ella, another pig, still has a long way to go, but she’s already learned some impulse control and picked up some handy life skills. She was reactive to people when she came to the Sanctuary, but training is helping her focus her energy more constructively as she learns boundaries and appropriate behavior. She’s also learned how to walk up and down a ramp and load into a crate, which will make traveling much easier once she finds her forever home.

As far as pig enrichment activities go, targeting is brilliantly simple. All it requires is a pig, a target stick (an inexpensive piece of equipment that can be made at home), some basic training knowledge and some tasty treats.

Most important of all, it’s great fun for the pigs. When Rosalie picks up the target stick to give Moe a break from circling, he raises his snout high in the air trying to reach it. So Rosalie lowers it to a point just above Moe’s head, getting him to gently tip it back while his hind end lowers to the ground into a perfect piggy “sit.” 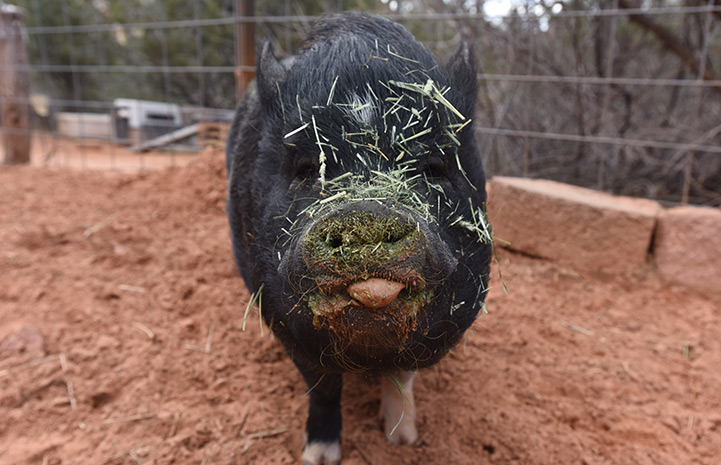