Image
Thanks to a teenager cat advocate, an underserved mobile home park in Layton, Utah, gets trap neuter return (TNR) help for their community cats.
By Denise LeBeau 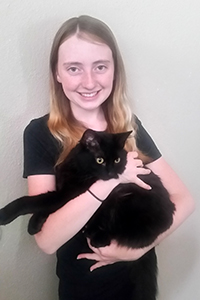 Thirteen-year-old McKenzie Howard of Layton, Utah, loves cats. She’s always counted cats as part of her family, but her compassion extends well beyond her immediate charges. So when she saw an alarming number of unowned cats and kittens in her neighborhood, she jumped into action. She contacted Best Friends Animal Society, which set a plan in motion to help dozens of cats who badly needed it.

Helping community (stray, feral or free-roaming) cats is a key part of Best Friends’ NKUT (No-Kill Utah) initiative, because in Utah, as in most parts of the country, cats can be at great risk of being killed in shelters.

In the NKUT initiative, Best Friends brings together passionate individuals, city shelters and an entire coalition of animal welfare organizations to end the killing of dogs and cats in shelters throughout the state of Utah. A big part of realizing Utah’s no-kill goals is keeping community cats from entering the shelter system. To that end, Best Friends supports trap/neuter/return (TNR), offers free year-round spay and neuter services for community cats, and works to pave the way for it all by getting pro-TNR ordinances passed in communities all over Utah. Layton is the largest city in Davis County and last summer, with Best Friends’ help, officials voted to make TNR legal.

So, when Jessica Vigos, Best Friends NKUT community cat program coordinator, received McKenzie’s phone call about the cats in her neighborhood, the groundwork was already in place, and thanks to the new ordinance in Davis County, she’d be able to trap and neuter the cats. It was a good thing, too, because, as McKenzie explains, the situation was out of control. “There were a lot of cats around, peeing everywhere and the kittens looked like they weren’t getting enough food. Many of the cats looked unhealthy,” she says.

TNR in a mobile home park

McKenzie and her parents took Jessica on a tour of their neighborhood, which is a large mobile home park, to point out areas where the cats tended to hang out. Jessica says, “In the past, when people called animal control about community cats, they would pick up the cats and kill them.” Jessica talked to the park’s manager and explained how TNR is different. No cats would be killed, and it’s more effective as a method of population control because if cats are simply removed instead of spayed or neutered and brought back, more unfixed cats can easily move right in.

The property manager was gung-ho to allow Best Friends to trap, neuter and return cats in the park, and sent out a letter to residents informing them of the plan. With more than 30 unaltered cats in the area, the support of the entire community would be important. He even reminded residents to refrain from feeding cats on trapping nights, and soon everyone was on board to do a TNR project in early May. 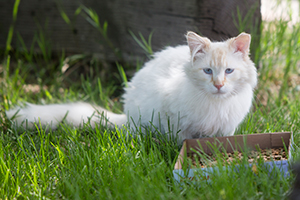 Through the project, 35 cats were trapped, spayed or neutered, and returned to the park. On hand were about half a dozen caregivers, including McKenzie. “McKenzie, being the amazing young lady she is, helped me both nights while I was in the park,” says Jessica. “McKenzie learned how to line traps with newspaper, how to set them, where to place them, and how to make sure they were covered with sheets to reduce cats’ stress.”

Best of all, the cats got medical care, and now that they’re spayed or neutered, the cats will stay healthier in the long run. And the number of cats will stay manageable, instead of spiraling out of control. “Fixing those 35 cats literally prevents hundreds more from being born,” says Jessica.

The project’s success is largely due to one girl’s efforts, with support from Best Friends when she and the cats needed it most.

Bring hope and healing to more animals like these by making a gift.

Learn more about how Best Friends is working to make Utah a no-kill state by 2019.