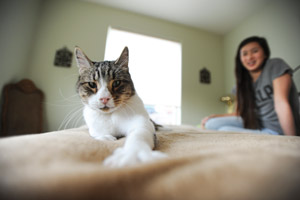 Since 2011, Isabel, a 15-year-old high school freshman, has never had to wonder what she will do during her time off. The Southern California teen comes to Best Friends Animal Sanctuary with her parents, Carol and John, to volunteer whenever she possibly can: That includes spring breaks, summer vacations, and the Thanksgiving and Christmas holiday seasons. A lifelong animal lover, Isabel recently passed up a trip to Disneyland in favor of returning to the Sanctuary. And while she’s here, the petite, soft-spoken young woman really works, taking on tasks that other teenagers (and even some adults) might avoid.

Isabel is used to being around animals. Her small high school is located on a farm that is home to goats, chickens and cats. And Isabel has two cats of her own, both of whom were rescued. One of the cats was found up in a tree, with a bobcat chasing him, when he was only six weeks old.

Volunteering with dogs and cats

Here at the Sanctuary, Isabel has volunteered in every animal area at least once. But she keeps finding herself back at Cat World and Dogtown, her favorites. She is, however, unable to pick a specific dog or cat as her favorite. “I love them all, really,” she says. “The more you spend time with each one, the more special (that one) become(s).” 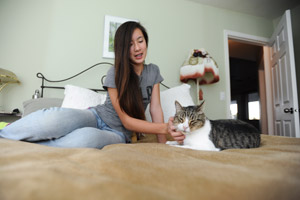 And that includes pets she’s taken on sleepovers, including a dog named Tobbs, a black Lab mix who was adopted this past spring, and Rocket Man, a senior tabby cat whom Isabel describes as “sweet, calm, affectionate, and really fun.”

But she also really likes the special-needs cats. Isabel and her mom have logged a lot of hours in Quincy House (the building in Cat World where many of the Sanctuary’s special-needs cats are housed), and particularly in the Incontinental Suite, which is – you’ve guessed it – a room just for incontinent cats. Although Isabel does her share of socializing and walking (both dogs and cats), she says that she also truly enjoys cleaning because it makes her feel like she is being really helpful.

Discovering Best Friends on a trip through national parks

It was serendipity that brought Isabel and her family to Best Friends for the first time. “We were on a trip to Bryce and Zion (National Parks) and had just gone to the Grand Canyon,” Isabel explains. Then they heard about Best Friends and decided to come and take a tour. “We ended up staying almost a week then,” Isabel says. Now, she exclaims, “I love it; it's my favorite place in the world to be.”

And it seems likely that the promising young woman, who is interested in a career in animal behavior/psychology, will keep returning again and again to the place that’s become her very own Disneyland.

Find out about volunteer opportunities at the Sanctuary.

Looking for ways to give this holiday season?