Teenage volunteer chooses dogs as her pet cause

Image
Teenager volunteers as a team captain for Strut Your Mutt in New York to raise money for homeless pets.
By Christelle L. Del Prete 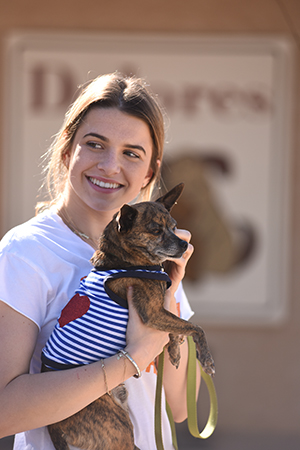 Katie McEvoy is barely 17, but she’s been working for years to help people and animals. She’s known about Best Friends for a while and visited the Sanctuary for the first time last year. After her visit, Katie returned home determined to do more to help Sanctuary animals and to end the killing of pets in America’s shelters.

This year Katie became a team captain for Strut Your Mutt, Best Friends’ charity dog walk fundraiser presented by BOBS from Skechers. She set goals to raise $5,000 and walk in the live event in New York City, one of 14 cities where strutters can stroll with others this fall to help homeless pets. In addition, a virtual portion of Strut Your Mutt is open to people who cannot attend a live event. With her goal in place, Katie then got creative.

Join Strut Your Mutt to raise funds for pets

Katie’s no stranger to hard work and creative ideas. At home in New York, she has sought out volunteer work for teens and led the charge on her own. Katie is starting a club at her school to raise awareness about no-kill and about Best Friends’ puppy mill initiatives.

The teen also trained two of her three family pets to be therapy dogs. She brings Eloise the cocker spaniel to a New York City hospital and to retirement homes. She and her mother even designed a special cart so that they can wheel Eloise right up to people’s bedsides. It’s rewarding work, but Katie was eager to do more and make a greater impact for homeless pets.

Setting up shop and spreading the word

As captain of the Strut your Mutt fundraising team that she named Katie Loves Dogs, Katie decided to kick-start the team’s fundraising herself.

She went online and ordered a large batch of dog T-shirts, bandanas and lots of colorful vinyl sheets. Then she used stencils to cut dog bones and stars from the vinyl and ironed them onto the T-shirts and bandanas. When she was done, she had approximately 100 decorative dog T-shirts and 40 bandanas that she could sell for the cause.

Then Katie set up shop and offered her creations for sale in front of grocery stores and a dog grooming salon. She not only let her customers know that 100 percent of the proceeds would go to Best Friends, but she also didn’t pass up the opportunity to spread the word about Best Friends’ work. With each purchase, she gave out an information packet so that people would understand how Best Friends is working to Save Them All. “It wasn’t just about getting the money, but getting the word out,” Katie explains. 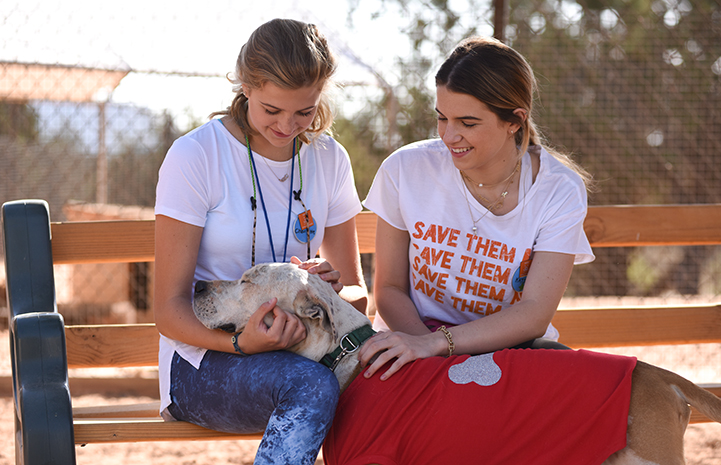 Katie’s inventory sold out in just five days. “People loved it, and they loved what we were doing,” she says. “It was really fulfilling.” But there was more fun in store. Katie took 20 of the T-shirts she had set aside for Sanctuary dogs, as well as a few of the bandanas, and brought them with her when she recently came to visit Best Friends.

During the few days Katie got to enjoy the Sanctuary, she visited Dogtown’s puppy preschool and took a dog named Doc on a sleepover. Though Doc has allergies and a skin condition, he had a fantastic time cuddling with Katie. And she felt the same way. The highlight of the trip, however, might have been when Katie’s new friends in Dogtown modeled the T-shirts that she had made for them.

One of those doggie models was Fender, an incredibly sweet pit bull terrier mix who came to Best Friends from an overcrowded shelter. Poor Fender was in pretty rough shape when he arrived at Dogtown. But he’s feeling much better now, and one of his favorite things to do is to greet visitors and volunteers.

When Fender came out to meet Katie, he was sporting one of her T-shirts — a red one with a silver dog bone on it. The two shared a few quiet moments together, and then Katie was on the go again. She’s not one to sit in the shade and relax for very long when there is work to be done.

As of late August, Katie and her team have already raised nearly $7,000 for Strut Your Mutt presented by BOBS from Skechers — far exceeding their initial fundraising goal of $5,000. That includes $900 Katie made by creating and selling the T-shirts and bandanas. But she isn't stopping there. She's still hard at work fundraising, and when the New York City event takes place October 1, Katie will be there walking all three of her dogs.

And after that, Katie plans to stay involved with Best Friends and to visit the Sanctuary again. “It’s the thing I look forward to the most,” she says. 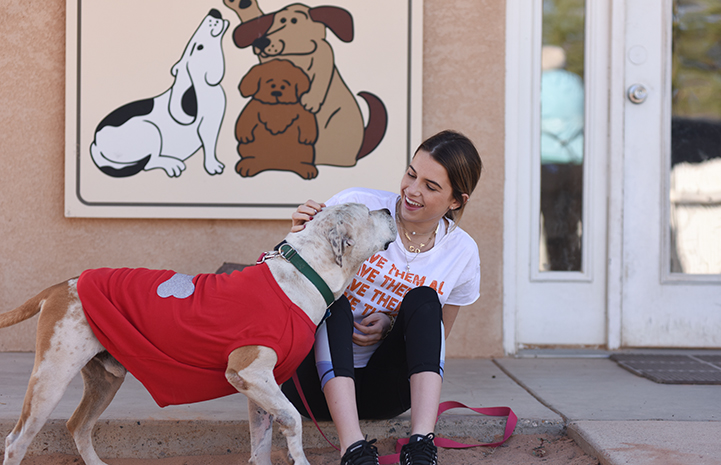