When a low-budget commercial for Furkids, a Best Friends Network partner and Georgia’s largest no-kill animal shelter, went viral last year, it garnered attention worldwide, and understandably so. In addition to plenty of adorable adoptable kitties, the video features volunteer Paul Preston, who hilariously “sells” cats like a used car salesman hawks vehicles. But despite Paul’s stellar performance, some say the real star of the video is Venus, the long-haired tabby who is seen giving Paul a high five.

“That video was the number one trending video on YouTube,” says Samantha Shelton, Furkids’ CEO and founder. “It really gave Furkids international recognition. But most of the comments people made about it were like, ‘Oh my gosh, I can’t believe that cat just high-fived.’”

In the video, even Paul appears surprised — and delighted — when Venus’ paw makes contact with his palm. But the feline’s perfectly timed trick wasn’t just a cute ploy. It was part of something much larger that’s revolutionizing shelter life for cats. Venus and countless other Furkids cats have been trained using positive reinforcement techniques as part of the Jackson Galaxy Foundation’s Cat Pawsitive program. Cat Pawsitive is a clicker-training initiative that enriches daily life for cats in shelters, strengthens the human-cat bond and, best of all, helps improve cats’ adoptability.

“The genesis of Cat Pawsitive stemmed from the simple desire to duplicate the ‘aha!’ moment I had in the early stages of my life with cats as a shelter worker,” Jackson Galaxy says. “By utilizing the training concepts that were, to that point, only used for the dogs in our care, not only were the cats stimulated, motivated and energized, but so was I. That, along with the most important result — lives being saved — was the win-win I envisioned passing on to as many cats and shelters and rescue groups as I possibly could.” 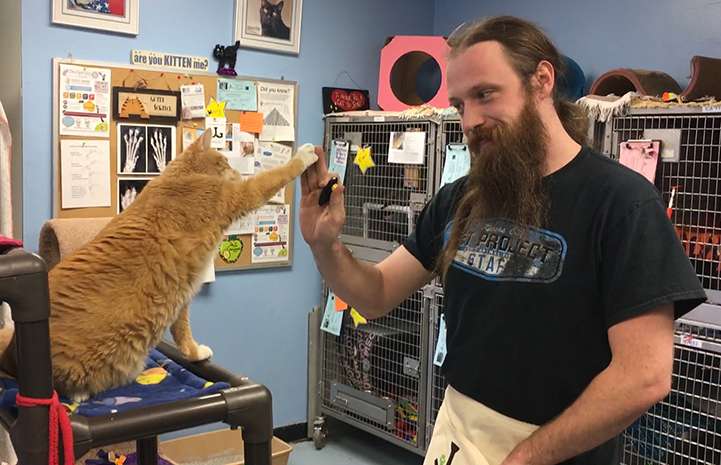 In 2016, Furkids became one of the first rescue organizations selected to participate in Cat Pawsitive. The Jackson Galaxy Foundation provided Furkids with training materials and a professional trainer to coach staff and volunteers in how to use the various techniques.

Samantha says the program has become a valuable part of Furkids’ process. “When adopters come into the cats’ rooms, they’re of course going to notice the cats who come to them right away with their tails up in the air,” she says. “But there are all these great cats being overlooked because they’re shy or traumatized. This program has allowed us to highlight those cats. It helps them gain confidence and become more approachable, and it helps cats stand out. There’s nothing like bringing an adopter into a room and being able to show them that a cat can high five. People love that. It attracts them to the cat and often it closes the deal.” 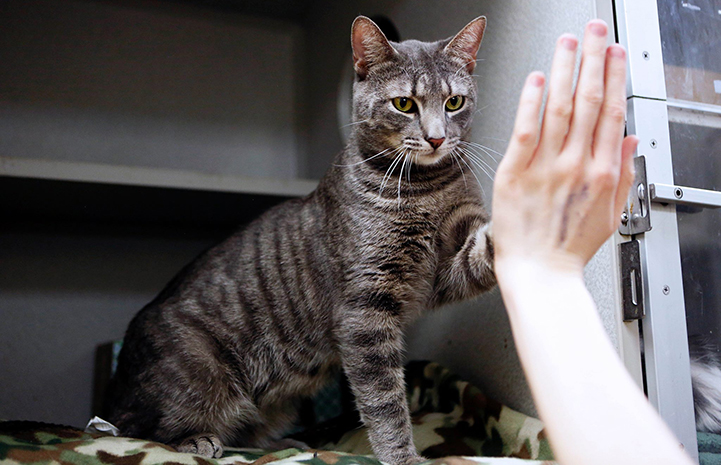 Why train a cat?

Think cats can’t be trained? Guess again. Numerous rescue organizations have implemented training programs that prove this notion couldn’t be further from the truth. Using positive reinforcement with clickers, toys and delicious treats, shelter staff and volunteers are training cats to come when called, sit, give head bumps and high fives, and more. And it’s not just about delighting potential adopters.

“Cats need to feel in control of their lives in order to feel confident and happy, and they lose that control the second they arrive at a shelter,” says Samantha Bell, cat behavior and enrichment lead for Best Friends in Los Angeles and a Cat Pawsitive trainer-mentor. “Through positive reinforcement training, we’re giving them choices and some control over their lives. We are training the friendly cats to do endearing behaviors to get them noticed by potential adopters, and we are training shy cats by rewarding brave behavior. We’re helping cats find homes faster and saving more lives to get to no-kill.”

The shelter environment, with its often-frenetic activity, can be a stressful one, and it’s not uncommon for cats in shelters to become shy, fearful or even aggressive. “Even the most outgoing and friendly cats can become nervous, shut down or even just bored,” says Christie Rogero, program manager for Cat Pawsitive. “Cats who are already anxious by nature can become downright terrified. And when cats become fearful or shut down — or conversely, too over-stimulated to handle easily — their caregivers can feel powerless to assist.”

Take Raed, for example. This fluffy black-and-white cat was rescued from the streets of war-torn Lebanon in 2006 and brought to Best Friends Animal Sanctuary. “Within seconds, Raed would transition from play to severely aggressive play,” says Dr. Frank McMillan, Best Friends director of well-being studies. Dr. Frank began clicker training with Raed, which helped the feline gain control over his behavior and provided the mental stimulation he needed.

Soon, Raed was a different cat. “People who had at one point been afraid to interact with him were now able to feel good about being with him,” Dr. Frank says. Training helps caregivers build relationships with cats, which makes the cats more trusting and more open to making connections with others, including potential adopters. Plus, as Dr. Frank says, “Happier cats show better.” 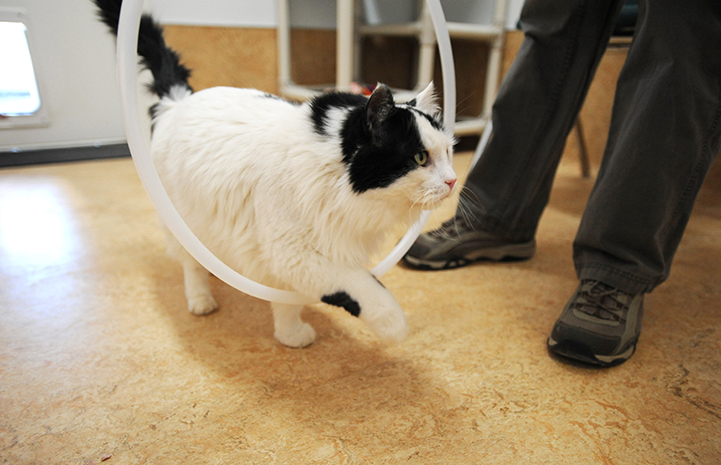 Training can also give cats something to rely on in the often-unpredictable atmosphere of shelters. “In an environment like this, where we have different people in at different times to meet the animals, training helps them become more relaxed,” says Eleasha Gall, an animal behavior specialist at Annenberg PetSpace in Los Angeles. “The training

is at least predictable. If people they have not met before come in, but the new person can do a few finger targets or object targets with the animal, it is suddenly a more familiar and relaxing interaction.” (Targeting is a training technique in which the animal is taught to touch something with his nose or paw, and when he does, he’s rewarded with a treat.)

There are other benefits to training cats. “It’s a really great way to engage our volunteers with something a little different,” says Maria Decker, Northeast adoption center manager for the Philadelphia Animal Welfare Society, a rescue group that participates in Cat Pawsitive. The cats’ progress is tracked on a bulletin board in the adoption center, and the display prompted visitors to ask questions about the program. Maria says, “Many (visitors) were very interested in how it worked — and, quite frankly, surprised that you could train a cat. This generated lots of interest in cats that were a part of the program and helped get them adopted.”

Helping cats in shelters find forever homes is ultimately what these training initiatives are all about. In the United States, hundreds of thousands of cats are killed in shelters each year, and research shows that feline adoption rates may be negatively affected by stereotypes surrounding cats. In fact, a 2015 PetSmart Charities survey found that 56 percent of participants believed more people would adopt a cat if stereotypes about them were removed.

“There’s a lot of misinformation out there about cats, and it breaks my heart and infuriates me at the same time because a lot of people don’t understand cats,” Samantha Shelton says. “But training cats can help change that. We’re breaking down stereotypes.” Eleasha agrees: “Cats don’t want to spend their lives fighting with the people they live with. But if we don’t try to understand them, then we are really just keeping them in a hard-to-thrive environment.” 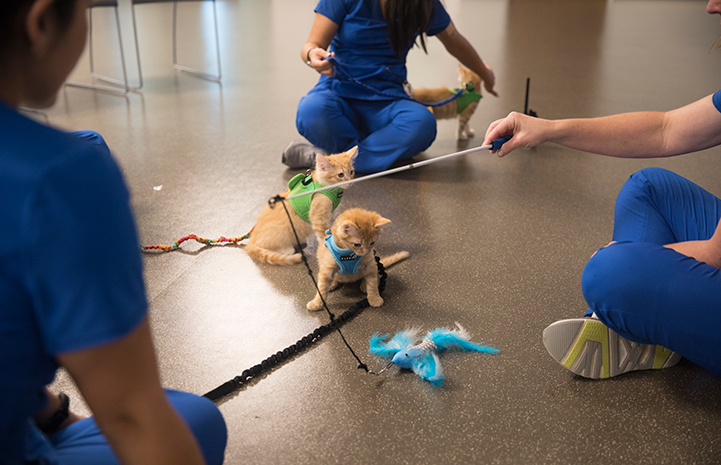 Many rescue organizations have also begun training cats to wear a harness and walk on leash. Best Friends has been taking its feline residents on leashed walks since 2008, and cats like nine-year-old Ooms, a sweet tabby with a neurological condition, benefit from daily outings. While not every cat is comfortable on a leash, some courageous kitties crave a little adventure and providing what they need can make it easier for them to find the right home. “Training is done with all of our cats, but putting them on a leash or using the clicker depends on the cat,” says Eleasha.

For cats like Ooms, walks on leash are something they look forward to. But for others, just helping them to feel more comfortable or open to affection is enough. “Not all of the cats we train are going to be high-fiving and jumping through hoops,” Christie says. “For some, simply regaining their confidence and feeling safe enough to, for example, willingly give a head bump to an open hand is a huge win. But we have also had cats who learned to run agility courses. We meet cats where they are.” 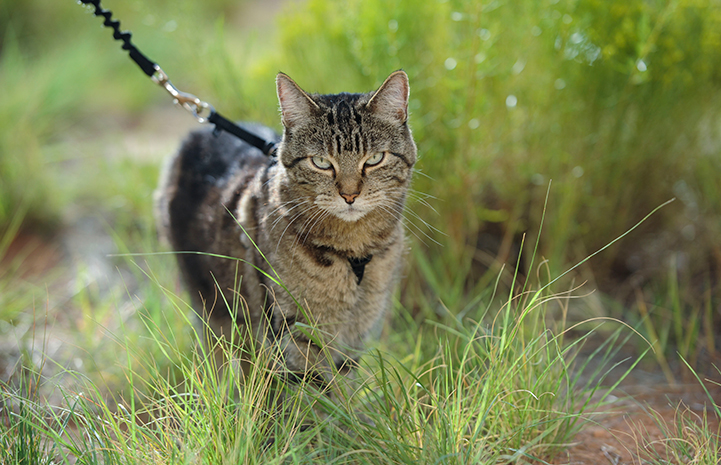 A few minutes can save a cat’s life

Implementing and running clicker or leash-training programs may seem like quite an undertaking, but it doesn’t take a huge time commitment. And, as mentioned above, it’s something that volunteers can be trained to do and enjoy participating in.

Just a bit of work each day is all it took for Rosie, a long-haired cat at an SPCA in Bakersfield, California. When Rosie first arrived at the shelter, she lashed out at anyone who tried to touch her, so Samantha Bell began clicker training with her. “We started out capturing eye contact and rewarding her for not growling,” Samantha says. “The (staff) were concerned about her matting, so next we tried targeting with a brush. They would ‘click and treat’ when she touched the brush with her head. Pretty soon, we discovered that she loved brushing. By the time the program finished, Rosie was enjoying being petted and brushed head to tail, doing dainty high fives and spins, and sitting in laps.”

Samantha Shelton says, “Anyone who tries this is going to see results, no question. You will reap the rewards -- which equates to more lives saved.” And we’ll do a high five to that. 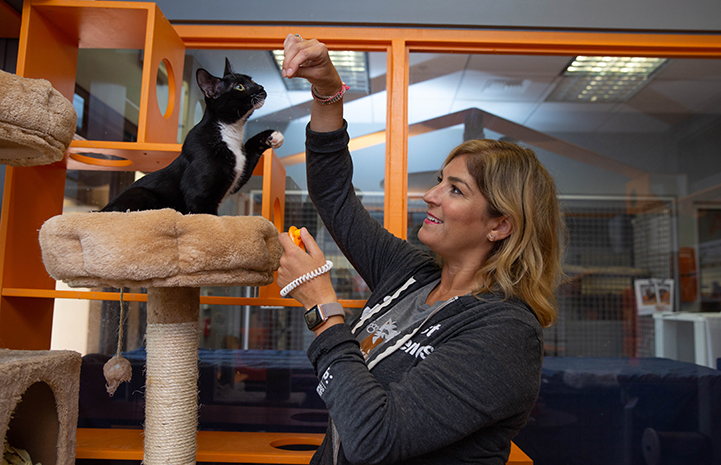