Image
Feline with spine deterioration that causes incontinence comes to the Sanctuary, and caregivers help her with a diet and exercise regimen.
By Christelle L. Del Prete

When Elisha recently turned nine, her caregivers in Cat World dressed her up like a princess and threw her a special birthday party. A happy and active cat today, Elisha has come a long way since coming from a shelter to Best Friends.

Though Elisha originally had a prior home, her person gave her up to a Los Angeles shelter when the orange tabby cat stopped using her litter box.  As it turned out, it wasn’t a simple medical condition like a urinary tract infection that could be easily treated. It wasn’t a behavioral issue, either. Although the exact cause is unknown (a previous trauma is one possibility), veterinarians determined that Elisha has a degenerative spine condition that causes her incontinence. And for a while, that also made it pretty hard for her to get around.

During Elisha’s first few months at the Sanctuary, she was crabby with the other cats, and would swat at them if they came too close. She also had trouble lifting her back end completely up off the ground. Because moving around had become a struggle, Elisha didn’t do it very much.

Overeating goes out the door

Cat World caregivers were concerned about Elisha’s quality of life. She was only seven years old, but she acted like a much older cat — and a grumpy one at that. Elisha was a perky, spirited cat on the inside. Caregivers saw signs of it from time to time when they were petting and feeding her. So they began working to bring that happy cat out of the shadows and into the light.

The first thing to do was to help Elisha lose a bit of weight. Carrying extra pounds made it even harder for her to get around.

Elisha was fed at regular times throughout the day, and she was able to eat her fill each time, but without snacks between meals. Elisha also learned how to eat out of kitty food puzzles, which require her to use her mind and move her body to get to her food. It made eating fun, too. 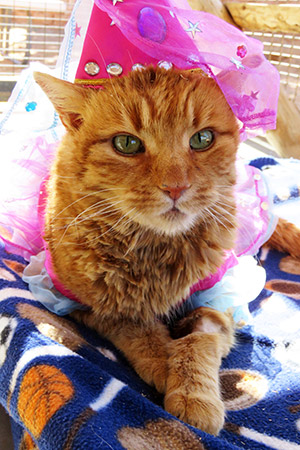 Physical fitness goals for a cat

Most of all, Elisha needed to get physically active. Her fitness goals included losing the extra weight and building up the muscles needed to help her move around more comfortably.

It’s not always easy to begin an exercise program, and the first step is often the hardest. But this is where Elisha’s love of food was actually quite helpful. Her caregivers would take a bowl of dry food or kitty treats and shake the bowl a few feet away from her. If Elisha walked up to it, she would get a small treat.

Eventually, caregivers moved Elisha’s daily exercises outside of the building, and asked her to walk a little further each time before getting a treat. Gradually, she began shedding the extra weight and getting stronger.

Becoming the life of the party

While there’s no cure for Elisha’s condition, she’s in tiptop shape and feeling her best. These days, she can walk around far more easily than before. She can even run ― something that wasn’t possible when she first arrived. When she’s feeling especially good, she’ll bound around like a little fawn.

Now, instead of feeling uncomfortable and grumpy, Elisha enjoys basking in the center of attention. She’s even become a favorite with volunteers.

While her birthday was an extra special event, now even an ordinary day is cause for celebration, because for the first time in a long time, Elisha feels good.