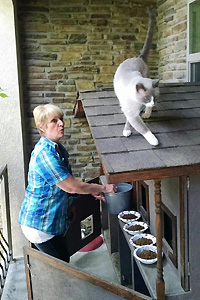 John and Jen Sharo live next to a sprawling golf course that brings the natural beauty of the local flora and fauna right up to their doorstep in West Valley City, Utah. The couple cherishes watching the wild animals who call their backyard home, but last fall, they noticed a new population had taken up residence on their property — cats.

While nobody officially “owned” the cats, the animal-loving Sharos decided to take responsibility for them. To care for the elusive cats, the couple installed a custom-built cat shelter and began daily feedings. Once they’d established a routine, John and Jen got to know their charges better. One beautiful Siamese mix is friendlier than the rest. They call her Bright Eyes, and John began looking forward to seeing her every day.

In all, the Sharos counted six cats who regularly came by to eat. They knew if they did not spay or neuter the cats, there would soon be dozens of kittens. They wanted to get the cats fixed, but they were concerned about the cost. In addition, health issues made it impossible for the Sharos to handle all the work of trapping the cats, getting them to the vet and transporting them back to be released — until one day a friend informed them that the support they needed was just a phone call away.

Best Friends Animal Society–Utah has a trap-neuter-return (TNR) program that supplies resources and hands-on assistance to help folks keep their community cats happy and healthy. While talking with a fellow cat lover, John learned that Best Friends staff would come out to the property, trap the cats, transport them to their spay or neuter surgeries, vaccinate them, and then return them — all at no cost to the caregiver.

John contacted Autumn Wagner, Best Friends community cat coordinator, and she was soon on her way to meet the Sharos and their feline friends. “Working with the caregivers is integral to my job,” says Autumn. “I feel honored to meet the incredible people who saw an animal in need, and did not ignore that place in their heart that spoke to them.”

When Autumn arrived for the big TNR day, Bright Eyes was ready to show everyone how it’s done. She jumped right into the Best Friends transport van as Autumn was busy baiting traps with wet cat food. After arriving at the clinic, the cats were then spayed or neutered, except for Bright Eyes who, as it turned out, was already spayed. They were then all safely returned to be released where they’d been trapped. 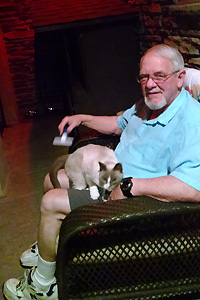 The fact that Bright Eyes was already fixed reinforces John’s commitment to his community cats. “These ‘wild cats’ often have a beginning with some human,” says John. He and Jen are happy to be Bright Eyes’ new family — to look out for her and make sure she has food and medical care.

The Sharos now know that if any new faces pop up around the cat food bowls, they can contact Best Friends to make sure that they, too, are spayed or neutered. Autumn loves helping people who care for community cats, as well as being part of the big picture to help animals in Utah. “Because of our TNR program, fewer cats are entering the animal shelter, because they’re fixed and returned,” she says. “This means fewer resources are spent on community cats, and more attention can be given to the dogs and cats waiting to be adopted from the shelter.”

“We’re so grateful for the help that has helped our ‘kids’ thrive, while preventing a population explosion,” says John. “Best Friends has extended a lifetime warranty to us for our community cats.”

Learn more about how Best Friends is helping animals in Utah, including what we’re doing to make Utah a no-kill state by 2019.

Photos by by John Sharo