The trip of a lifetime 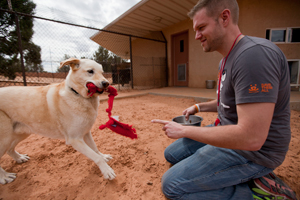 Having volunteered in animal welfare in Minnesota for years, Marc Skjervem had heard of Best Friends, especially through watching the “DogTown” television series. But it wasn’t until Strut Your Mutt came to the Minneapolis–St. Paul area in 2014 that he really got involved. He’s so glad he did, because it led to the trip of a lifetime.

Marc jumped in with both feet when he signed on as the Minneapolis–St. Paul Strut Your Mutt event director, a volunteer role he took seriously. “I never viewed it as work,” says Marc. “I viewed it as an amazing opportunity that I could really invest my whole self in.”

Under his leadership, the Twin Cities event raised more than $63,000, surpassing the goal of $50,000. As an added bonus, Marc acquired some wonderful friendships. So when Strut Your Mutt wrapped up, he couldn’t stop thinking about how much he wanted to visit the Sanctuary. Other event committee members, volunteers and participants expressed the same sentiment. So they planned a vacation together.

Upon arrival, they not only took the Sanctuary van tour,  they got to see some off-the-beaten-path places on the thousands of acres of staggering natural beauty, including the hidden underground lake and the meditation labyrinth overlooking the canyon. But then it was time to get to work. After all, they were there to volunteer.

While volunteering in Dogtown at the Sanctuary, Marc fell in love with Vanessa, an American Staffordshire terrier mix who had contracted distemper as a puppy. Luckily, she beat the odds and survived, but it left her clumsy and uncoordinated — characteristics that make this loving dog all the more endearing.

Since Vanessa wasn’t able to go on a walk, Marc spent time with her by sitting in her run, where she would stumble over to him. At one point, she literally fell into his lap. Though Vanessa was the only one who could wag her tail, both were on cloud nine. 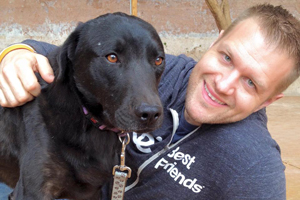 However, his time at Dogtown wasn’t all snuggles. There was work to do, so Marc helped clean, scooped poop and, of course, walked dogs — plenty of them.

At one point, he and his partner, Jeff Bachman, walked Ranger and his best bud, Lava. Even though the two dogs are shy on their own, they are comfortable together.

After caregivers requested that Jeff and Marc take Ranger on a solo outing, they visited Angels Landing, a natural amphitheater at the Sanctuary, and the Welcome Center. Ranger was nervous at first, but once they opened a window so he could feel the wind in his face and see the scenery better, his demeanor changed. “All of a sudden, we saw Ranger’s head out the window and his tail was up and wagging,” recalls Marc. “He was a totally different dog.”

When they returned to Dogtown, Ranger’s caregiver was astounded and became almost tearful at seeing Ranger so joyful.

This year, Marc will again serve as the volunteer event director for the Minneapolis–St. Paul Strut Your Mutt. However, it was his visit to the Sanctuary that provided the life-changing experience that now lives in his soul.

“The trip was a very spiritual, centering and magical experience, coupled with developing a strong connection to the animals and to Best Friends,” says Marc. “With everybody we connected with and everybody we met who worked there, I could sense that not only did they believe in the (Best Friends) mission, but they lived it out each and every day. You could feel that they were working toward creating positive change. It was truly a trip of a lifetime.”

Learn more about volunteering at Strut Your Mutt.

Photos by Kurt Budde and courtesy of Marc Skjervem