Tripod dog is loving life in his new home

Image
Pitbull surrendered to West Valley Animal Services had severe infection in his front leg that required amputation, but that doesn't hold him back.
By Nicole Hamilton

Yesterday? What about it? If you’re Sparky, a pit bull terrier mix living in Salt Lake City, Utah, there’s simply no reason to look back. After all, there are new friends to make, fields of grass to roll around in, and a whole lot of hikes to get in before the sun sets.

Sparky seems to capture the heart of everyone he meets with his happy and ready-for-anything disposition. Not even the recent amputation of his front leg gets him down. He learned quickly how to stand and run again after the surgery — ready to get back to the business of playing in no time. And also ready to find his forever home. 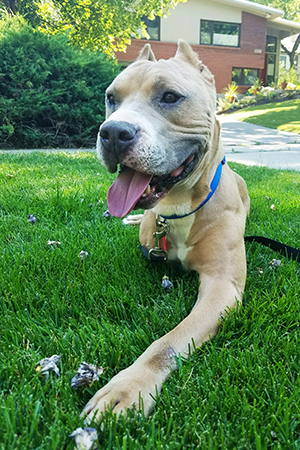 When Sparky’s family surrendered him to West Valley City Animal Shelter (WVCAS) near Salt Lake City, Utah, this past April, he had an infection in his front leg that made walking almost impossible. When the medical team saw how much he was struggling to get around, and learned how serious the infection in his leg was becoming, they made the decision to amputate his front leg.

The medical team was confident that Sparky would make a complete recovery, and they were right. Tess Hartwell, licensing specialist at WVCAS, remembers watching Sparky adapt quickly to life without his leg, and she was inspired by his unabashed love of life despite the circumstances. “He wobbled a little at first, but he wasn’t going to let anything get in his way of having fun. In no time he was back to his old self, running around and trying to play with anyone who was near him,” Tess says.

The perfect adopter for a spirited, happy dog

When Cody Parsons came to the Best Friends Pet Adoption Center in Salt Lake City, he was looking to adopt a friendly, high-spirited and athletic dog who could keep up with him. Turns out he didn’t have to look long. Sparky was at the center for the day along with other dogs from WVCAS, in hopes that they’d get adopted. While all cats at the center are part of Best Friends’ program, the dog adoption spaces are designated for different municipal shelters to showcase their adoptable dogs one day each week.

What Cody saw when he first met Sparky was a dog who could fit right into his spontaneous and active lifestyle. What he didn’t see was a dog who was missing a leg. Like Sparky, Cody isn’t too concerned with yesterday either, and the dog’s three-legged status simply didn’t matter much to Cody. He saw a future with Sparky very clearly. That day, he adopted his first dog.

On today’s agenda: enjoy every moment

Outdoor adventures and playtime with Cody and his girlfriend make up most of Sparky’s day. And he has surprised Cody with his gentleness. The six-year-old pit bull terrier mix greets every new dog the same way — with sweetness and patience.

He can also hold his own on long walks and hikes with Cody. And he isn’t afraid to stage a little protest by sitting down and not budging when walks end too soon, in his opinion. “He just wants to enjoy life,” says Cody. “He’s a great, happy dog, and he makes everyone around him feel happy, too.”