Turkey and Indian runner duck are best of friends

Image
A turkey and Indian runner duck are best friends. The duck is very protective of the turkey; however, her grooming of the turkey is problematic.
By David Dickson

Some animals have real struggles with confidence. Something as common as a ringing telephone might send them darting for a cubbyhole. Not Amelia the duck, however. When it comes to looking out for her pal Lilli the turkey, Amelia probably has enough confidence to stare down a charging rhino.

Amelia is a tall and slender Indian runner duck. She came to the Sanctuary with Lilli, a turkey featured on the Guardian Angel section of the Best Friends website. "She's wonderful," says caregiver Bobbie Foster about Amelia.

The two birds were raised together. They'd both been rescued after nobody bought them at the same feed store. As ducks are highly social creatures, Amelia latched onto Lilli as her bosom buddy. When they arrived at Best Friends, Amelia and Lilli stayed living together as they always had.

At first, Amelia wasn't quite sure what she thought of all these strangers trying to come near her buddy. She wasn't afraid of people — not even a little bit — but she didn't want anybody getting close to Lilli until she'd had a chance to check the person out first.

And, if Amelia wasn't quite ready to let a caregiver near Lilli, she'd square her feet wide and step between Lilli and the person, trying her level best to look 12 feet tall. "It was really cute because she was so little!" says Bobbie.

No worries, though. Amelia learned quickly enough that all the caregivers coming in day after day are as kind as can be. So, she relaxed in her duties as self-appointed guardian. Bobbie even taught her how to eat out of her hand. Apparently, Amelia is a huge fan of corn and peas. A handful of delectable veggies can go a long way toward winning this duck's heart.

Finding the right balance with friendship between two birds 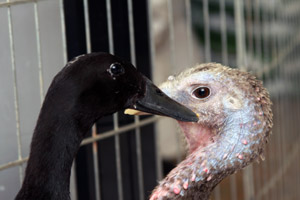 Her friendship with Lilli was a bit trickier, though. Amelia was so fond of Lilli that she would groom her over and over. Lilli enjoyed the friendship, but it wasn't such a great thing for her feathers. All that lavish attention was starting to accidentally pull feathers out. In addition, Lilli needed some more personal space for the extra medical attention she requires.

In the end, caregivers needed to find a way to let these two stay friends, only with a bit of healthy distance between them. As an experiment they ran a dividing wire fence up the room. It ended up being the perfect solution.

They can still see each other, and chat back and forth, yet Lilli can more easily rest up as she needs. Plus, this new setup allows Amelia access to a pond, which she couldn't have if Lilli wasn't separated. Lilli might drown in a pond with her leg and foot problems.

"Amelia loves the pond," Bobbie explains. And even when she's out for a dip in the pond, which is just outside their play area, Amelia can keep an eye on Lilli.

Lilli, for her part, always stays close to the common wall so she can still hang out with her friend. They've remained the best of buds.

"They provide each other emotional support," Bobbie says. "It's like a blanket."

Of course, under Amelia's blanket-like exterior is a ninja in duck's clothing just waiting for someone to look the wrong way at Lilli ...

When you get right down to it, who could ask for a better friend?

Become a Guardian Angel to an animal

Every animal at Best Friends, including special-needs animals like Lilli, receive top-quality medical care thanks to donors like you. Please consider becoming a Guardian Angel today.