Image
One female dog who can be pushy and has had a hard time getting along with other dogs finds a best friend in a laid-back male dog.
By David Dickson

Caregivers at Best Friends always smile after they’ve introduced two animals who decide to become friends. You see, matchmaking isn’t always easy. The payoffs, however, are worth it. And some payoffs cause a few more high fives than others. One such celebrated match happened recently between dogs Buddha and Dailey. 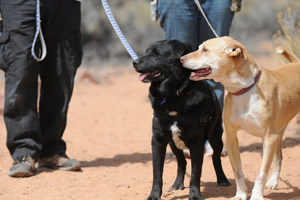 Love at first sight for Dailey (left) and Buddha (right)

Buddha has been at Best Friends for years, and has had quite a problem getting along with other dogs. She can be pushy, to put it lightly, and hasn’t had too great of a track record with meet and greets. Most dogs don’t like putting up with her attitude.

However, when Dailey came along, he seemed to be a good fit for Buddha. He has great dog skills. He’s laid-back, and he’s fairly unassuming. These are all good qualities because, well, let’s just say Buddha isn’t likely to respond well to a dog who wants to take charge. Caregivers decided to try introducing these two.

Introducing two dogs to one another

With most dogs they’ve introduced Buddha to in the past, it was always a gradual process before she’d show signs of trusting the other dog. Dailey, however, broke the mold. "She immediately just loved him," explains caregiver Erin Schmitz.

There was something about Dailey that captured Buddha’s heart at once. It didn’t take long to see this was a special friendship indeed. After they moved in to the same play area, the pair could be found snuggling on some of the large beds, something Buddha has never allowed with any other dog in the past. "They are cute together," says caregiver Maddie Haydon. "They make a great couple." 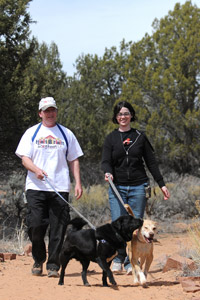 They’ve been good for each other in more ways than one.

Dailey came to Best Friends from a hoarding situation. When he arrived, he was afraid of people. Buddha, on the other hand, loves her caregivers. Dailey would watch Buddha approach her caregivers, and soon Dailey began approaching caregivers, too. Dailey even started attending shy dog class and did very well.

Dailey may not be ready yet to hand out kisses to complete strangers, but he’s learned to let people be his friends. "Dailey loves people now because Buddha loves people," says Erin.

As for Buddha, she’s still picky around other dogs, but even she has made improvements with Dailey showing her the ropes. "She’s more comfortable when she’s around him," says Erin. They’ve both helped one another.

So what’s Dailey’s secret? How did he measure up where so many other dogs didn’t? That’s easy. "He listens to her," says Maddie. "He lets her run the show!" Clearly, this match is worth more than a few high fives.

A perfect match for you

There are dogs of every size, shape and personality — from social butterflies looking for another best friend to wallflowers waiting to bloom — at the Sanctuary. All are looking for a forever family to share their hearts with.