Image
Two senior shih tzus, who ended up at Animal Care Centers of NYC as strays, are adopted into a forever home together.
By Nicole Hamilton

“We are absolutely not getting a dog today.”

This is what David Johnston told his husband, Danny Costa, as they walked out the door on their way to an adoption event. The plan was to meet dogs to figure out what type would be best for them, so that they would be ready when the time came to adopt. In other words, they were just looking.

David must have really meant what he said, because they didn’t adopt a dog that day. They adopted two.

“It was honestly one of the best decisions we’ve ever made,” says David, about adopting two senior shih tzus from Best Friends–New York (and confirming that sometimes the best of intentions don’t happen for a reason). “They’re just perfect for us.” 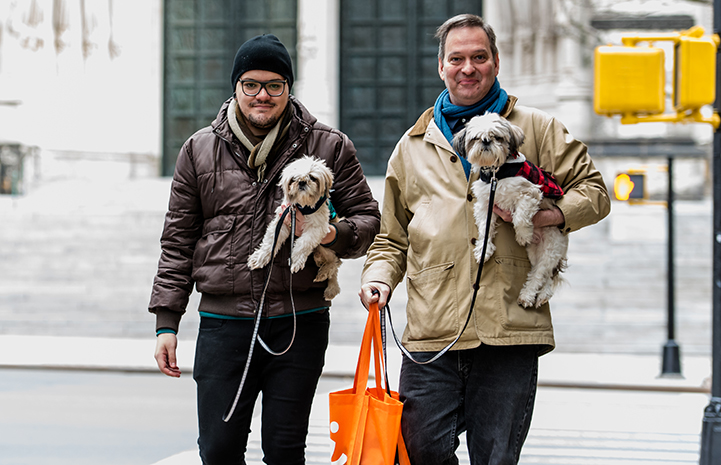 Older dogs go from a shelter to a loving home

Sunny and Moon ended up at Animal Care Centers of NYC as strays before being taken in by Best Friends–New York.

To help Sunny and Moon make a smooth transition from the shelter to their forever home, the two dogs went to stay with a Best Friends foster mom, Lina Lerentracht, who saw their true personalities emerge as they started feeling more comfortable.

“You could almost picture them as two old men,” she says. “They’d bicker at each other occasionally.”  But despite their sometimes snarky moments, they wanted to cuddle and sleep with each other at night.

Lina made plans to accompany Sunny and Moon to weekend adoption events, where the adoption team hoped to find new homes for the two senior dogs.

It’s uncertain how they’d ended up homeless in the first place. But no matter what happened in their past, Sunny and Moon deserved great homes where they could spend their golden years being loved and cared for. That’s where, Danny and David came in. 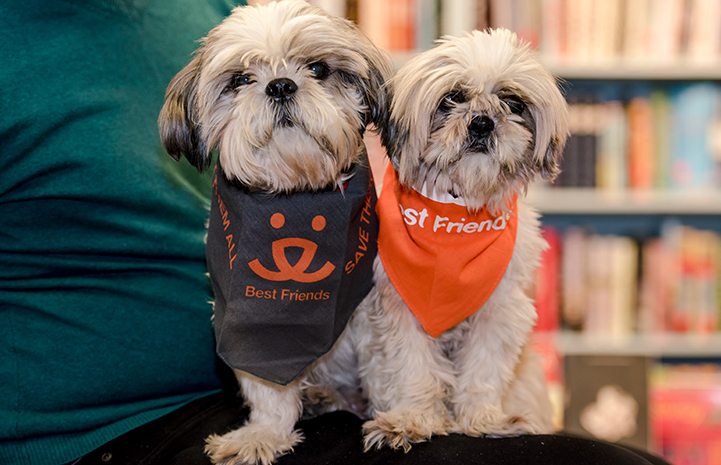 Great dogs who take care of each other

Danny grew up with dogs in Brazil, his native country, and he had been trying to convince David to adopt one ever since they started living together. But between work and travel schedules, the timing was never quite right.

Though he was still hesitant as to whether he wanted a dog at all, David had decided on one thing: When the time came to welcome a dog into their home, it would be a larger one. But plans have a way of changing.

When David and Danny met the two senior shih tzus at an adoption event hosted by Susie’s Senior Dogs, and started thinking about adopting them, it was the thought of the dogs going to someone else that made their decision final. “If we waited, someone else would adopt them,” says Danny. “And we couldn’t let that happen.”

That day, they adopted Sunny and Moon, brought them home and gave them new names: Frank and Sid. Frank, they soon learned, loves affection and can usually be found lying on his back waiting for a belly rub. Sid, who is a little smaller than Frank, is the funny guy. And because his eyesight isn’t what it used to be, Danny and David leave a light on for him at night so he doesn’t get lost. 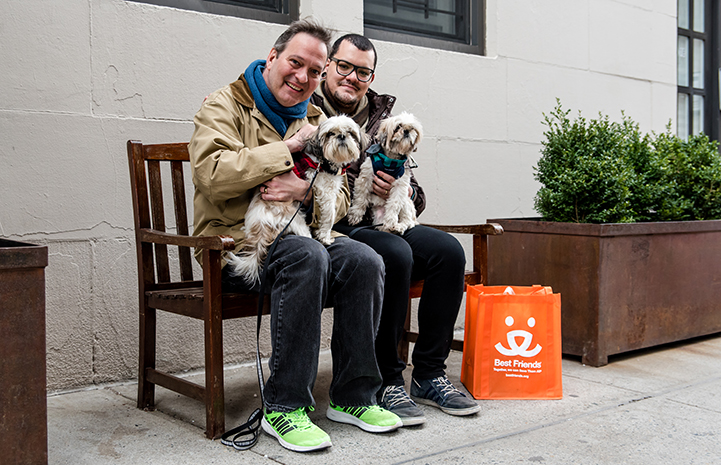 “They are just great dogs,” says David, who likes that he doesn’t have to worry about the dogs being lonely every time they leave the house. “They take good care of each other. We put a cushion by the radiator and they love to curl up together.”

David has noticed that since adopting Frank and Sid there’s a new sense of calmness in the home.

“They really do change the atmosphere,” says David. “They’re just so happy about everything and love so completely. It’s been wonderful for us to have them, and it’s been wonderful to give them the chance to be together.”

Give to Best Friends. Help save animals in NYC and beyond. 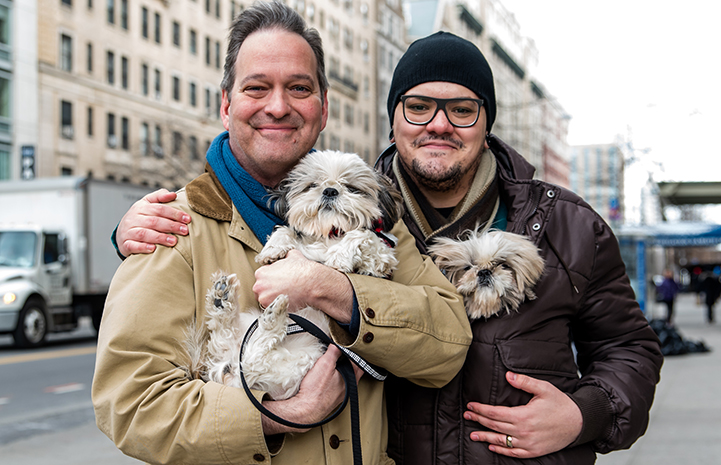