Underdog gets 10 times the love she’d been missing

Image
Underdog, a sweet pooch with some health challenges, including heartworm, is adopted by the perfect family, who are showering her with love.
By Nicole Hamilton

Maybe it was the way her tail wagged as she turned a stranger into a friend, or the way she remained a kind and gentle dog even after cruelty landed her in a large municipal shelter. Whatever the reason, when Polly Pocket was at the Best Friends Lifesaving Center in Atlanta, she had a way of always inspiring people.

She inspired a volunteer to launch what’s become the center’s popular running program, an artist to paint her portrait, and eventually a big family to welcome her into their home. 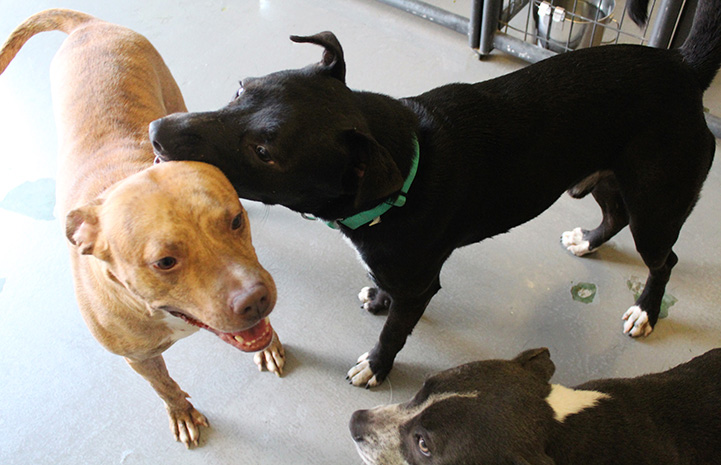 A better chance to find a home

Before arriving at Best Friends, Polly Pocket was at the Fulton County Animal Services shelter and not feeling her best. For starters, she had been mistreated in her recent past, and she also had heartworm.

Although heartworm disease is treatable, Polly Pocket’s health status, coupled with her large size, put her at a disadvantage at the shelter, where she was surrounded by younger, smaller, healthier dogs.

At Best Friends, however, Polly Pocket got the space and the time for her personality to shine. And shine it did. “She’s a ham,” says Brantlee Vickers, volunteer coordinator at the center. 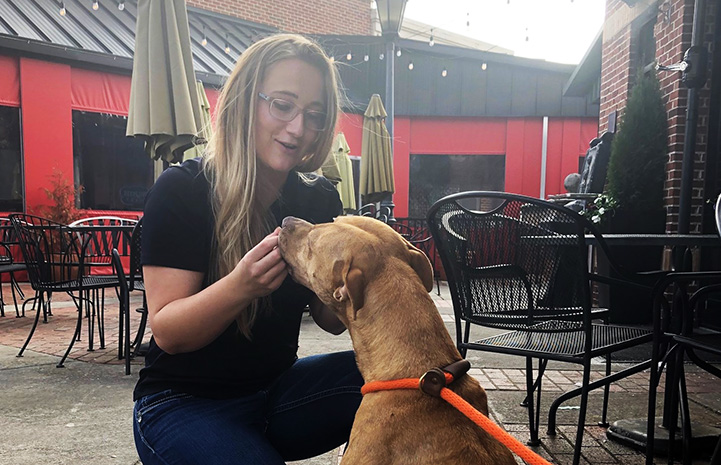 Beating heartworm without a hitch

The first order of business for Polly Pocket when she got to the center was to start her heartworm treatment. She took the medication in stride, and then came the harder part — rest. After heartworm treatment, dogs must avoid vigorous play, strenuous exercise, or anything that gets them excited and raises their heart rate.

It turns out that Polly Pocket took the required rest in stride, too — no easy feat for a dog with lots of energy. And when her required rest time was over, the treatment was successful and she was heartworm-free. The only thing left to do was find her a home.

A volunteer puts in the miles for Polly

You’d think a happy people-loving dog like Polly Pocket would find a family quickly, but there’s no rhyme or reason when it comes to why some pets are adopted quicker than others. It just took Polly Pocket a little longer than most to find her home.

In the meantime, staff and volunteers learned all about her. From Day One, it was clear that Polly Pocket thrived when she was with people and when she was moving. She loves to play — more so with people than with fellow dogs — and she loves getting in a regular run. But the longer she stayed at Best Friends, the more she became antsy to see more of the world outside of the center.

“As time progressed, she developed some anxiety and stress,” says Brantlee. “On walks, she started having what you’d call panic attacks. But she loved people and she was always super happy to see everyone.”

Luckily, Polly Pocket had a kindred spirit at the center — a volunteer and avid runner named Sandy Saffold, who started taking her on runs. “She did fantastic,” says Sandy. “She was absolutely perfect.”

After every run, Polly Pocket relaxed easier in her kennel. In fact, she loved it so much that it inspired Sandy to start a running club with dogs at the center.

As for the portrait of Polly Pocket? That happened when a local artist visited the center looking for a dog whose portrait she could paint to get people interested in her business. The team chose Polly Pocket. 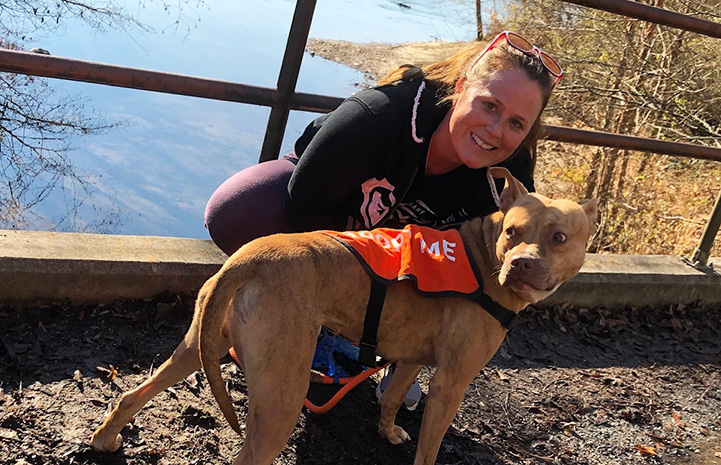 Meanwhile, Atlanta resident Connie was thinking that a dog would make a great addition to her already large household, which includes children and grandchildren. It’s the kind of home where a dog could get as much love and attention as she wants and needs.

One day she decided to visit Best Friends with 10 family members in tow, including her husband, children, and grandchildren. “We wanted to all go together because whatever dog we picked, we wanted to make sure everybody would be able to love them,” says Connie.

Sandy was just about to leave the center that day when she heard a family was interested in adopting Polly Pocket. When she went over to Polly Pocket’s kennel she was surprised to see so many people surrounding her. “That’s 10 chances Polly had to make up for all love she’d been missing,” says Sandy.

Sandy accompanied Connie and her family out into the meet-and-greet area and watched as Polly Pocket let Connie’s young grandchildren pet and play with her. That’s when Sandy knew she was watching Polly Pocket’s first moments with her family. “She did so well with the kids,” says Sandy. “She was definitely in her element.” 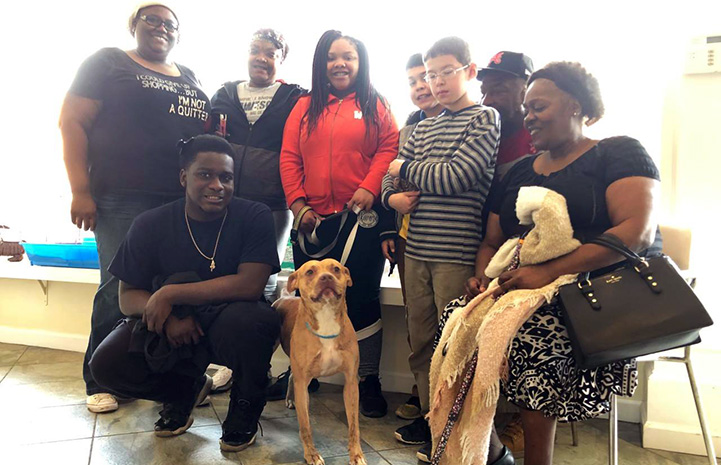 A part of the family

Now Polly Pocket divides her time between a big screened-in porch that Connie set up just for her and the rest of the house with her big family. She loves playing with the children she lives with, and understands that she has to play gently with the youngest.

Connie, who is legally blind, admits that she was a little worried that she’d have a difficult time walking Polly because of her size and strength. But Polly Pocket has proven to be gentle and easygoing with her, too. “She does wonderful,” says Connie. “And I feel safe when I’m with her.”

Today when Sandy laces up her shoes for a run with a dog from the center, she can think back to the one who started it all. Every run Polly Pocket took with Sandy was leading her to the one thing she really needed — a home. “I’m so happy she’s out there getting loved,” she says.

“Polly came from such a hard beginning and now she has what she deserves,” says Brantlee. “She’s the underdog who winds up winning in the end.”

Add a family member. Adopt a dog near you.