Image
Once an unwanted stray dog, Marshmallow was saved when a Good Samaritan found her living near a dumpster. Her life is much happier now.
By Christelle L. Del Prete

For over a year and a half, Marshmallow has been living at the Best Friends Animal Clinic. Being a clinic dog might not sound like much fun, but Marshmallow would beg to differ. Her days are full of activity, and her transformation has been incredible. She’s gone from being an unwanted stray, in desperate need of medical attention, to being the happy and much-loved darling of the brand-new Sanctuary clinic.

A rough start for a stray, unwanted dog 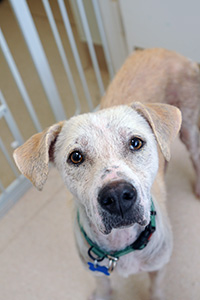 A good Samaritan found Marshmallow living by a dumpster in a rough part of Houston. The poor dog spent her days scrounging for food and trying to avoid fights with other strays. Most of her fur was missing, and her skin was covered in painful sores. The good Samaritan fed her and tried to find a rescue organization that could help. But local rescue groups were full, and Marshmallow was clearly a very special case.

So Marshmallow came to the Sanctuary, where the Best Friends veterinary team immediately treated her for demodectic mange and severe secondary infections. In addition to medication and a special diet, Marshmallow began getting daily medical baths to ease her sore, itchy skin. At first, she wasn’t thrilled with her baths, but gradually she began to feel better and gain trust in her caregivers.

Happy life of a dog at Best Friends Animal Sanctuary

Though Marshmallow was feeling much better, her occasional flare-ups needed close monitoring by the medical staff. So rather than moving from the clinic into Dogtown, she took up permanent residence right where she was. But no one wanted her to miss out on the best parts of life at Dogtown just because she had to stay in the clinic. So she not only gets lots of attention from Dogtown staff; she gets it from clinic staff too.

An active girl, Marshmallow is always eager to accompany vet tech Mel Lyons on three- to four-mile hikes on Dogtown’s numerous trails. And she spends time each afternoon at Tara’s Run, Dogtown’s large indoor training and agility facility. Marshmallow loves to kick up her heels in the soft dirt, and run up and down the A-frames and through tunnels as fast as she can.

Training and cart rides for dog 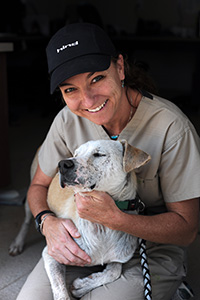 After exercise, it’s time for training. Marshmallow is very smart and can anticipate what her caregivers want her to do. She knows “sit” and “stay,” and has been working on leash manners with Dogtown staff member Sylvia Newcombe. Sylvia set out to teach Marshmallow not to pull, and the clever girl caught on immediately. Whenever Marshmallow forgets herself and strains at the end of her leash, Sylvia stops. Then Marshmallow looks back at her as if to say, "Oops – forgot!" Then the two continue on.

On the way to and from her daily baths at the on-site grooming salon, Marshmallow enjoys golf cart and car rides. There’s even time to play fetch in the Best Friends dog park. When her caregivers tell her “down,” Marshmallow comically throws her entire body on the ground and waits for them to toss the ball.

After her busy exercise schedule, Marshmallow gets some downtime. When she’s not out and about, she loves relaxing in her very own room in the new clinic. She loves lying in the sun, wandering outside into the attached play yard, or watching the goings-on in the clinic through a large glass wall. Chances are, she has no idea she’s in the clinic for health reasons. She’s just living life as the darling of the clinic until the day someone chooses her for adoption, and she becomes the darling of her very own home.

Learn more about dogs at the Sanctuary.