Image
Best Friends veterinarian Dr. Frank McMillan is studying the behavioral challenges of former puppy mill breeder dogs and how to treat them.
By David Dickson 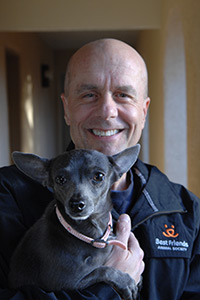 Ever thought dogs who bark loud enough to make your eardrums implode are trying to say something important? Of course they are! And Best Friends vet Dr. Frank McMillan is doing his best to figure out what.

Dr. Frank, who sees many rescued puppy mill dogs come through the sanctuary, is conducting an ongoing survey to learn more about adult dogs who were used for breeding in puppy mills, and how their experiences have affected them. He has around 200 people participating in the survey, all of whom have adopted adult breeding mill dogs after they’d left the puppy mill life. As luck would have it, one of his survey dogs happens to share an office with him right here at Best Friends.

Madge the dog came to Best Friends over a year ago from the Virginia puppy mill bust. She went into foster care with Best Friends animal care director Patty Hegwood. After a successful foster period, Patty adopted Madge. There were physical problems with Madge, of course. She had scabies, and a horribly neglected mouth. Housetraining would also be a challenge, because of course, Madge had been raised in a cage! Doors, sofas, staircases, and grass were all brand new. But there was something else interesting. Right from the beginning, Madge had a rather feisty way about her. And a bark to go with it. As Patty puts it, "Madge has a piercing bark that will go through your eye and out your ear!"

While Madge has come a long ways with trusting, she hasn’t seen the need to stop barking. After all, it’s one of her true talents. And since Madge comes to the sanctuary with Patty, where Dr. Frank sits in the same room, he has ample opportunity to analyze that glorious bark! (Not that barking is a psychological problem per se—just a fringe benefit!) Madge, along with the other puppy mill dogs Dr. Frank is studying, might just be able to teach us all a few things.

First, Dr. Frank hopes to discover how many puppy mill breeding dogs end up with emotional problems. All of them? Most of them? Only some? Then, he wants to find out what the problems are and how best to treat them. With the 200 or so dogs he’s following in this ongoing study, he hopes to pick up a few tools for helping them adjust to life after the puppy mill.

It’s still early in the survey, but already Dr. Frank has seen some trends. A common theme people write about is how they try so hard to love the dogs, but the dogs are slow to let them. Dr. Frank describes this "psychological injury" as something similar to post-traumatic stress disorder in humans. Put another way, these dogs have had a rough go of things! And that takes time to get over.

But if Madge is any indication, they really do make progress. After all, she has already included at least three people into her inner circle where incessant barking is no longer necessary! She’s also become a snuggle champion for Patty, which says a lot considering Madge used to snarl at anybody who approached her. No matter where Dr. Frank’s survey ends up, with Madge around, at least the research will always be fun!