Vicktory dog Mel passes away, leaving behind a legacy of love and redemption 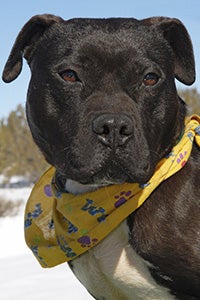 It has been more than 11 years since the Vicktory dogs — 22 of the dogs rescued from Michael Vick’s dogfighting ring — arrived at Best Friends Animal Sanctuary. Since that day in January 2008, these dogs have shown the world an immeasurable amount of forgiveness, love and redemption.

Vicktory dog Mel went home from Best Friends with radio host Richard Hunter in 2010. Like all the Vicktory dogs, he had his challenges, but he also had the love and support he needed to overcome them. At home, Mel lived with other dogs and cats and got along great with everyone. His favorite thing in the world was going for car rides. At night, he would fall asleep with his head right on the pillow, snoring loudly beside Richard. Mel remained hesitant with new people, but he would eventually warm up and let them come over to pet him. He seemed to have learned that, like dogs, people deserve a second chance.

None of the dogs were puppies when they came to Best Friends, and since 11 years have gone by, many of the dogs have succumbed to age or health issues. Each loss is heartbreaking to the people who knew the dogs personally when they were at the Sanctuary, to their families, and to the hundreds or even thousands of people who felt like they knew them through social media.

The Vicktory dogs brought perfect strangers together and helped them forge lasting friendships. They’ve become center points of loving families. They’ve helped to change the public’s perception of pit bull terriers for the better. Most of all, they’ve shown the world that dogs rescued from fighting rings deserve a second chance — that their lives have meaning, that they are worth saving and that love can triumph over even the darkest of pasts.

There are six Vicktory dogs still living the good life. Three (Mya, Curly and Meryl) call the Sanctuary home, and three of them are living in loving adoptive homes (Cherry, Squeaker and Shadow). But those who love the Vicktory dogs are grieving for Mel and taking the time to reflect on his life and legacy. 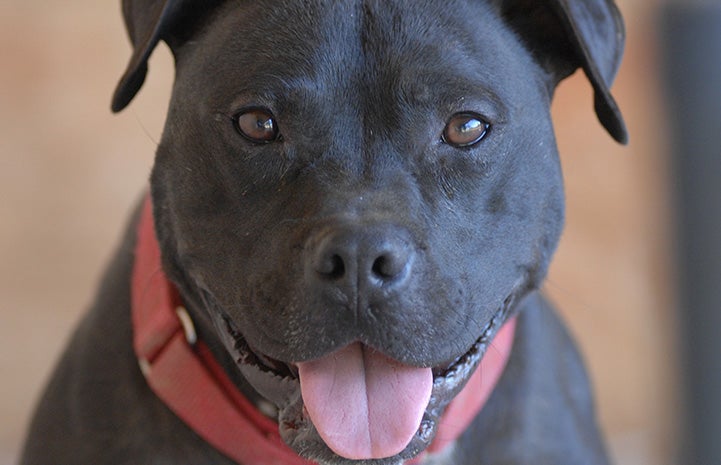 Michelle Weaver, co-manager of Dogtown when the Vicktory dogs arrived at Best Friends, remembers Mel fondly: “Mel, like each of the Vicktory dogs, holds a special place in my heart. I most remember his quiet, watchful demeanor around people he didn't know, his love of car rides, and the pure joy he demonstrated when he was around other dogs. I am so grateful that he was able to spend so many years in a home surrounded by love.”

Dogtown caregiver Carissa Hendrick, who cared for Mel while he lived at the Sanctuary, says, “I am so sorry to hear that Mel has passed away. However, it brings me so much comfort knowing that Mel went home with Richard. I know that Richard filled his life with love and support. Mel had a difficult beginning but a beautiful life.”

Best Friends vet tech assistant Paul Lindley was a caregiver at Dogtown when Mel was here. He remembers, he says, “a fearful yet happy-go-lucky dog who loved playtime with the other dogs.”

Betsy Kidder, a veterinary technician at Dogtown, says, “While he was stoic around strangers, Mel always expressed a quiet affection for the people he was comfortable with. His appreciation was noted not in grand overtures of affection, but rather in a subtle softening to his eyes or a soft sigh of contentment. Mel hit the jackpot when he met his dad, Richard, because like so many others who have adopted our Vicktory dogs, Richard had a unique understanding of their needs and accepted them with zero judgments or expectations, only wanting to provide a safe place for them to continue to heal. Mel could be Mel with Richard.” 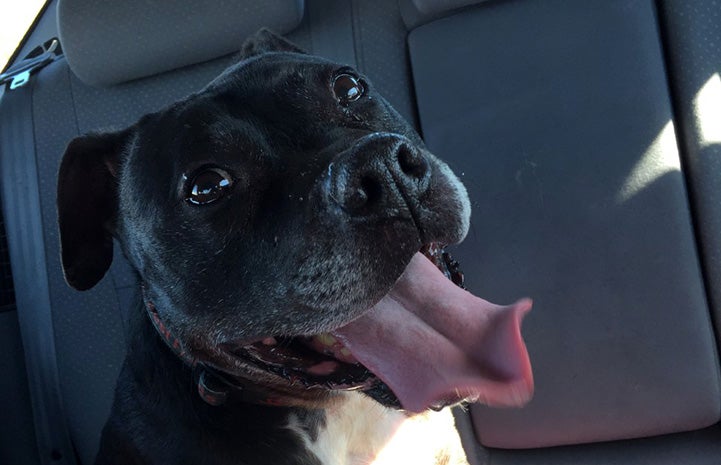 About Mel, from Richard

Richard accepted Mel completely for who he was and gave him the loving home and beautiful life he deserved so much. Below, he reflects on Mel’s life and all the love he brought to the world.

Mel passed away on the evening of August 13 after a brief and sudden illness. Before that, he was in intensive care for 48 hours after his neurological functions became suddenly impaired. Despite having the best around-the-clock care available to him, he sadly never recovered.

I was with him during his passing, and I was able to tell him how much he was loved, and how much he had affected my life and all of those (human, canine and feline) that he came in contact with. I told him he was a little hero for what he had overcome, and an inspiration to all of what is possible through perseverance and a willingness to trust.

Mel was likely in his 14th year, and we were so fortunate to have him for so many of those years. It was at the beginning of his life that he saw unspeakable horrors as part of Michael Vick’s infamous dogfighting ring. When that criminal enterprise was shut down, and when very few were willing to come to the rescue of the dogs, Best Friends Animal Society stepped up and launched what would become one of the greatest reclamation success stories in the history of animal rescue. Most of the dogs were later adopted out to loving families around the country, and Mel became just one of many examples of an abused animal who became a loving family pet. 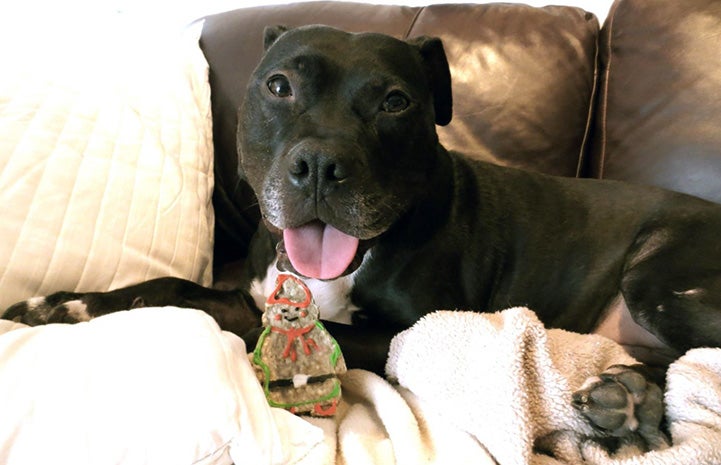 Time catches us all, and as Mel was one of the youngest of the Vicktory dogs, we saw most of them pass before him. With each loss, I shared the thought that the grief each family felt over their dog’s death was directly proportionate to the love that their dog felt from them in life. Now, I find myself having to trust my own words.

If you feel so inclined, here’s what I know Mel would most appreciate in the way of a tribute to him: Pet a pit bull today. If you like the way that feels (and you will), consider adopting one. They won’t be hard to find. They are the most prevalent dogs in shelters, the ones who often wait the longest for homes and who are the most misunderstood. If you can’t adopt, share your experience with someone who might be able to, and point them in the right direction. One way or another, let’s help pit bulls find their forever homes.

We look to the future in Mel’s honor, because this is what an adopter does. You give a homeless pet the best life they can possibly have, and when they inevitably pass on (hopefully at a nice old age), you adopt another one. That’s the best tribute we can give any of them. Each one should inspire the next. There will always be another animal in need, and for our family, there will always be a little bit of Mel in every one we adopt in the future.

Mel was so loved, and he will be missed more than we can really say, but we’re taking that love and carrying it on to another homeless pet, and another, and then another still.

It is perhaps that carrying on of love — that ability to heal a heavy heart and to love again — that is Mel’s true legacy. 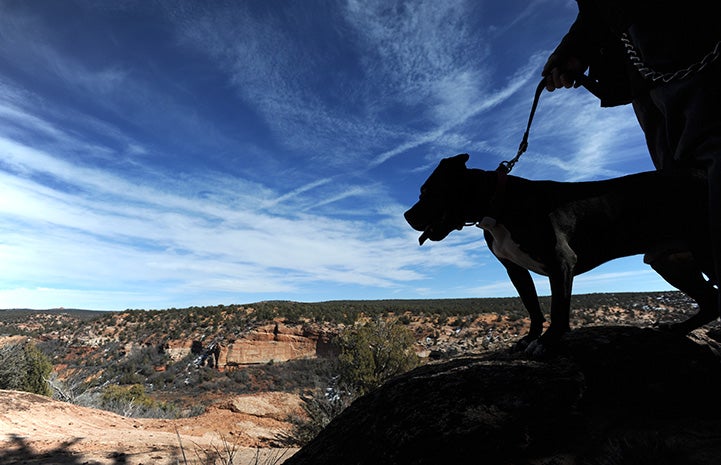 Photos by Best Friends staff and courtesy of Richard Hunter