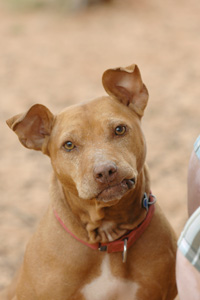 From the moment Little Red the Vicktory dog from the Michael Vick fight ring bust showed up to Best Friends, a veritable fan club of supporters sprang up around her almost overnight. Time and again people found themselves drawn to this sweet, gentle dog almost at first sight. Best Friends Dogtown caregiver Betsy Kidder was no exception. "There was something about her," Betsy says. "As soon as I met her, I fell in love with her."

That didn’t mean, however, that Little Red was ready to be loved back in the beginning. At least not up close. She still felt too nervous about the world around her. "She was very afraid of people," points out Betsy, who worked with Little Red from the beginning as one of the caregivers who slept with the Vicktory dogs at nights in their play area.

Over the years, Little Red has made slow but steady progress in trusting people. As one small example, she went from going into "pancake" mode when being connected to a leash (i.e., lying flat to the ground and refusing to budge), to enjoying her walks so much that she’d lunge in excitement at every turn, to finally learning how to walk with a nice loose leash right next to her caregiver. That alone is a huge accomplishment.

Over the years, Little Red has had a huge support system of friends and caregivers in her corner every step of the way. She’s been an office dog, for one thing, and has also attended several training classes with various caregivers, including wallflower classes for shy dogs. Little Red really enjoyed one particular staff-only training class that combined the classic shy dog curriculum with basic behavior training. "It was really laid back," explains Betsy about that class. The low-stress environment worked wonders for Little Red. She kept on learning, kept on improving.

By way of clarification, the Vicktory dogs have been working toward CGC certification ever since arriving. Little Red’s loose leash walking, for example, was a skill she had to learn for her CGC. It might’ve taken a plethora of treats along the way, yet she got there! One detail on that point, however. The CGC test has to be done without treats, but sometimes taking away treats creates a whole different ballgame.

So, while the dogs have been working steadily toward CGC all along, this was more of a formal class with additional structure and focus. At the beginning of class, each of the dogs had his or her own hurdles to clear. In Little Red’s case, Pat suspected there was one area in particular where she might need extra practice.

"Little Red’s biggest challenge is that she’s super sweet, but shy," Pat explains. Her default greeting to meet somebody new used to be hiding behind Betsy’s legs. Little Red needed to learn to meet strangers with calm confidence as part of the CGC training, not to hide behind anybody.

Thus the classes began. Vicktory dogs Squeaker, Oscar, Little Red, Georgia, Curly and Ray all attended. After the first class, it seemed like Little Red was actually holding her own quite well. They decided to give her the CGC test the following Sunday just to see where she was at, and to find out what she’d need to focus on in the classes. Bear in mind that as of this point they hadn’t even started taking away treats.

Well, guess what? She passed her test with a perfect 10 out of 10! "I was shocked," says Betsy. Again, this exercise was supposed to be, more than anything, a way to find out what Little Red would need to focus on in class. Yet she aced the whole test right out the gate, no treats or anything! All those years of hard work paid off. "She really is a sweet dog," says Pat. Adds Betsy, "There’s not a thing wrong with her."

Little Red’s timing couldn’t have been better, either. As it turns out, there’s already a potential home lined up. She must’ve known it was game time! Huge congrats to Little Red and the many people who have loved and helped her along the way.

As it turns out, Little Red’s success might have been contagious ... 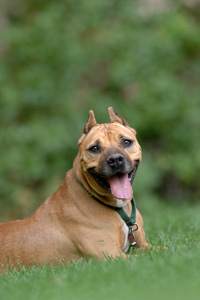 Georgia is another dog who put in a lot of time and effort, along with the people who loved her, before the formal classes. In her case, one of the big factors in her readiness was a caregiver who made it her personal goal to see that Georgia passed CGC certification.

Best Friends dog caregiver Kathy Moore has been working every day with Georgia for a full year. "Helping Georgia pass her CGC was one of my main goals when I moved to [her play area]," says Kathy. One of Georgia’s biggest obstacles, at first glance, might not sound like a big deal, but Georgia is really independent. "She can make herself happy with a water bucket or a toy," explains Kathy.

The difficulty, Kathy found, was that Georgia didn’t seem all that interested in forming a relationship with her. Georgia would just as soon go sniff the bushes as interact extensively with a person. Not to be discouraged, Kathy made it a point to spend time with Georgia three times a day, no matter what. Consistency was important. Then Kathy added two outings a day. In time, Georgia began to rely on the routine. Eventually they shared lunches together. Kathy and Georgia grew closer and closer, which is the backbone to all the relationship-based training at Best Friends.

Even so, Georgia had a couple of big challenges right out the gate. For one, she was reactive to other dogs. And two, she had a super hard time walking on a loose leash because of her constant desire to sniff and explore every square inch around her!

Loose leash walking can be a tough one to fix, even if the training method is rather straightforward. At Best Friends, the basic approach to teaching a dog how to walk alongside the caregiver is as follows: If the dog lunges ahead, the caregiver will stop walking entirely until the dog calms down and returns. Then, they can move forward again, at least a couple more steps. "Sometimes we’d only go down two lodges," says Kathy.

In the end, it took six months of consistent work before Georgia truly mastered the concept of loose leash walking. Once she figured out that by following the rules and paying attention she would get longer walks (not to mention treats along the way), a light clicked on in her mind. "She realized what the expectations were and started doing really well," points out Kathy.

After those basic skills were in place, including sit and stay, Georgia was primed and ready to learn more. As for being reactive around other dogs, Kathy would meet up with other caregivers or trainers in neutral spaces. The other dog would be 15 feet away, at least in the beginning. During these sessions, treats and other rewards were such a big part of the equation that Georgia began associating positive things with other dogs.

One dog she ended up spending a lot of time around was Goober, another Sanctuary dog who needed to work on his leash skills. Best Friends dog trainer Jen Gfeller worked with Goober while Kathy worked with Georgia. They’d practice training sessions in the parking lot, at the Welcome Center, really anywhere and everywhere they could so that the dogs could also get used to new locations. Eventually, they were able to work the dogs close to one another.

In time, Georgia’s manners got better and better. In fact, all her skills improved. During the CGC classes, Georgia showed signs that she, too, was ready to take the test. As such, Best Friends dog trainer Jen Severud tested Georgia. As part of the certification, it’s necessary that the one doing the test hasn’t been working with the dog, and Jen hadn’t been.

Before the test, Kathy spent time helping Georgia get all the zooms out of her system, and let her sniff up a storm (one of Georgia’s biggest weaknesses!). Kathy knew what Georgia needed in order to be at her best. All the work paid off. Georgia passed with flying colors, and may now be considered for a home!

Jen says it was an absolute blast to see the obvious bond between Kathy and Georgia. "The CGC is all about testing the dog and the handler. It’s a partnership thing," Jen explains. "They were really a team. They passed together."

Donate to help other animals

It's because of people like you that we are able to help dogs in need like Georgia and Little Red get the second chance at the good life they deserve! Give to Best Friends and help us help even more animals in need.

All our dogs are winners! Click here to see our available pooches that are ready to join your family.