Thanks to Voiceless-MI's Fix-a-Bull program, pit bull terriers Sugar and Baby will not just be cherished family members; they will live healthier lives and will not be compounding the homeless pet problem by having unwanted litters. Their person, Randy Morgan, says, "We rescued these two puppies from animal control. We were truly grateful for the services." The services he refers to are the free spay and neuter surgeries for pit bull terriers and mixes provided by No More Homeless Pets Network partner Voiceless-MI. The program was funded in part by a grant from Best Friends, because, as the folks at Voiceless-MI know all too well, the money should go where the problems are most dire. And the problems facing pit bull terriers in Michigan are daunting. 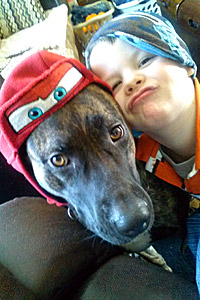 Holly Thoms, founder of Voiceless-MI, has been working on animal welfare issues for years in Michigan. Her work includes legislative issues (they're pushing an anti-gas chamber bill and anti-breed discriminatory legislation in Lansing), animal rescue, and low-cost spay/neuter, which she believes is the cornerstone to saving more lives. It was when she founded another group, Friends of the Shelter, that she realized the extent of the difficulties facing pit bull terriers.

"You'd walk through the shelters and 80 percent of the dogs would be pit bulls," says Holly. She knew that education, legislation and adoptions were all important, but people were facing real problems, and being able to offer low-cost and free spay and neuter services, along with vaccines, would give people what they need and help prevent more homeless pets. But there were no low-cost options. Holly says, "All About Animals (another animal welfare group) stepped up to help, and we started a mobile clinic once a month, but the need exceeded what the service could provide."

The need for services got Holly focusing on those requiring the most support: pit bull terriers. Since the program began, they've provided over 800 spay and neuter surgeries. Grants like the one from Best Friends, which funded 70 surgeries, allow them to fix the animals completely free of charge. They get the word out through local media outlets, such as announcements on the six o'clock news, Twitter and Facebook, and via word of mouth. To target the most at-risk pets, they go door to door in disadvantaged neighborhoods. Every single voucher is used. And to ensure maximum success, the program also offers transportation to and from appointments via volunteers. 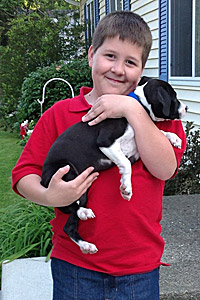 The results are far-reaching. Holly says, "We get a lot of people who apply for our services and think they can't keep their pets because they can't afford to get them licensed. We are able to help keep families together; it's that simple. People are so grateful."

People like Amy Welch, who proudly shares a photo of her son, Corey, holding their puppy, Melody. In a thank-you note, Amy writes, "I wanted to thank you again. Melody, our pit bull, was spayed thanks to your Fix-a-Bull program. We were able to afford to get her microchipped as well. I can't thank you enough for your help. She is a blessing to our family."