Image
Tripod pit bull, who had an injured front leg that had to be amputated, enjoys going for stroller rides and for Puppuccinos at Starbucks.
By Michelle Sathe

With his big, goofy grin and joyful personality, it’s not obvious that Bono, a three-year-old pit bull terrier at the Best Friends Lifesaving Center in Los Angeles, had a rough start in life. But a missing front limb and a shaved patch on his back leg tell a different story.

Don’t worry though. Bono’s story isn’t a sad one. In fact, it’s pretty inspiring because despite some health setbacks and the fact that he lost his home, Bono has always found a reason to be happy. Nothing stops him from seizing the day because, after all, he’s named after a rock star. 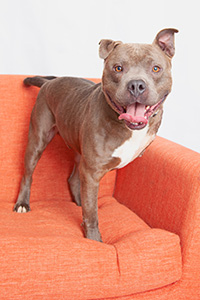 Coming together for an injured dog

Before coming to Best Friends, Bono was brought to a Los Angeles Animal Services (LAAS) shelter with an injured front leg. His wounds were severe, and shelter staff determined that his leg needed to be amputated due to nerve damage.

Bono handled the surgery like a champ, and once he was healed, he came to Best Friends where veterinarians discovered mast cell tumors on his back leg during a medical exam.

Those would have to be removed and Bono would need a clean bill of health from the medical team before he’d be ready to go to a new home (Spoiler alert: He’s all healed!)

How Best Friends is helping L.A. get to no-kill 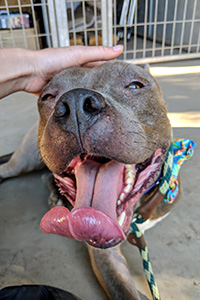 While recovering in the center’s medical area, Bono caught the attention of Jenna Lamica, a Best Friends volunteer and fan of three-legged dogs, and she decided to take him outside for a little time in the sun. As she watched Bono soak up every moment, she saw what makes him such an amazing dog. “Despite what he’s been through, he has a zest for life that is so inspiring,” she says.

After spending lots of time with Bono, Jenna realized he needed some tripod-appropriate accessories, including a special harness for balance. She and her husband, Chris, purchased the harness, but since Bono gets tired easily, they also picked up a stroller so they could roll him around the block.

Bono took to the stroller immediately. “We were going to take it slow, but Bono jumped in as soon as we opened the door — no treat necessary,” says Jenna. “It was like he knew this was his ride.”

Most of the time, Bono likes to stick his head out of the top like he’s in a convertible. “You have to give him a treat to get him out of the stroller,” says Jenna. 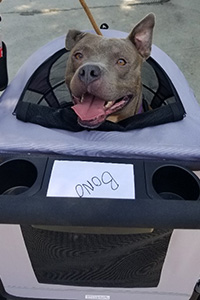 Bono also loves going with Jenna to Starbucks for Puppuccinos. “He looks like a baby seal when he eats his Puppuccinos,” she says. “It’s the cutest thing.”

Now Jenna spends at least 30 minutes a day (four times a week) helping Bono build core strength and develop manners that will help get him adopted.

Find out if your community is no-kill

“Bono’s a little wild in the car and can be a little mouthy, but he’s learning,” she says. “He settles in really quickly and will lay down for belly rubs when he’s tired.”

Also in the works is a doggy spa day, complete with a bath and massage. (Remember, rock stars require a little pampering.) And while everyone loves a good spa day, Jenna is looking forward to the day Bono really deserves — the day he is adopted.

“He’s just a young dog trapped in this body, but he’s still such a big sweetheart,” says Jenna. “You would never know Bono’s faced all these adversities. He’s so happy and loving.”

Visit a shelter near you and adopt your own rock star

Best Friends in Los Angeles  works collaboratively with animal rescue groups, city shelters and passionate individuals who are all dedicated to the mission of making Los Angeles a no-kill city. As part of this mission, Best Friends hosts adoption and fundraising events, manages two pet adoption centers, and leads the No-Kill Los Angeles (NKLA) initiative. Together, we will Save Them All.