Most shelter and rescue group volunteers go the extra mile for the animals in their care; however, Lotta Nilsson-May really goes the extra mile — literally. When she walks dogs, the miles add up quickly and she’s now the NKLA dog walking champ at Best Friends’ NKLA Pet Adoption Center in Los Angeles.

Her dedication to helping should come as no surprise, given that she was surrounded by animals during her childhood in Sweden. But it wasn’t until she came to the United States 20 years ago that she realized that healthy, adoptable animals were being killed in shelters. She wanted to help change that.

Lotta began by walking dogs for one Los Angeles animal rescue group, but when she started volunteering for Labs and Friends.org, an organization that’s one of many No-Kill Los Angeles (NKLA) Coalition partners, she expanded her horizons.

“I felt like walking dogs wasn’t enough for me,” says Lotta. “I wanted to do something more.”

So she also started fostering and transporting dogs from municipal shelters. That’s when she first learned about the NKLA Pet Adoption Center in West Los Angeles.

“NKLA opened my eyes to something amazing,” says Lotta. “You can go to a shelter and see dogs sitting in a corner of the kennel that nobody’s looking at. We pull them, give them vet care and a bath and take them to the NKLA Pet Adoption Center where the environment is amazing. Then a week later they could be adopted by the same person who walked by them in the shelter.”

“It’s like a magic trick,” she says. “It’s amazing how the same dog who was at risk a week ago is now living a good life, and people actually see the dog for what he is.” 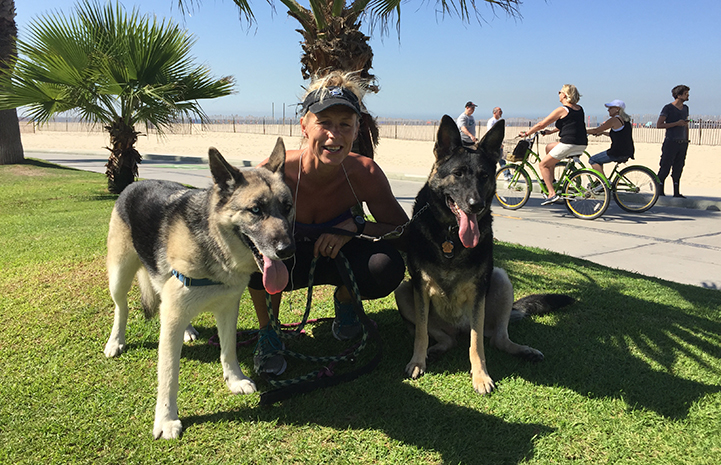 Lotta likes to volunteer often at the NKLA center, with its positive atmosphere. Luckily a supportive husband and her profession as a traveling masseuse allow her plenty of free time, which is good since she’s typically volunteering by walking dogs from two to four hours a day.

Of course, she makes sure every dog who needs a trip outside gets a walk; however, she’s learned some dogs need a little extra effort, so she always selects a “project dog.”

It started with Whiskey, a husky who wasn’t showing well in his kennel. So Lotta would come in the morning and take him for a long walk with her own dogs. Then she’d return later for an afternoon walk. That structure and workout contributed to him eventually being adopted.

After each of Lotta’s project dogs are adopted, she chooses another. She’s now spending extra time with Sugar, a Belgian Malinois, who is high-energy and picky about her canine pals. No problem — they just go on extra-long outings. An added bonus is that Sugar loves the water, so the two of them regularly walk miles down a bike path to the ocean for some splash-filled playtime. 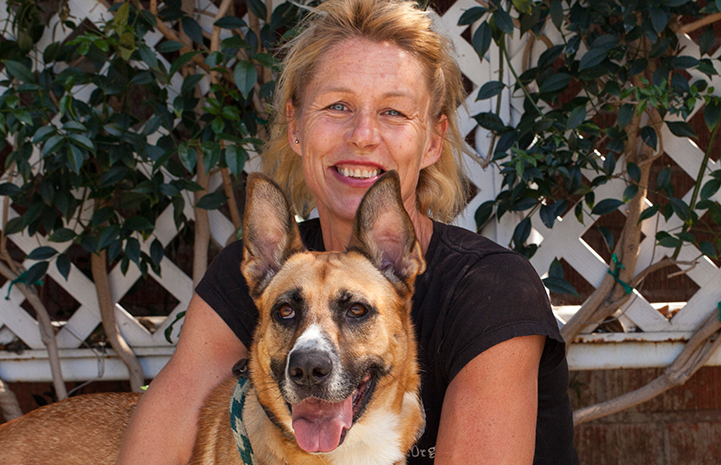 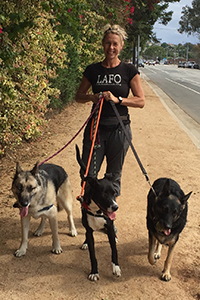 “We always encourage an exchange of ideas,” says Erika. And the contest would be just the thing to foster a little friendly competition — all for a great cause.

Others persuaded Lotta to participate, but since there are so many volunteers, she didn’t think she’d win. But with 57.15 hours logged in at the end of the contest, Lotta was crowned the champion. She plans on paying it forward: To thank NKLA employees for all their hard work, she will donate chair massages to the staff, who she says are like family to her.

So in the end, everyone wins: Lotta, and most especially, the dogs.