A volunteer who runs for dogs

Image
Volunteer starts a running club for shelter dogs at Best Friends in Atlanta. The dogs wear ‘adopt me' vests on runs and release their pent-up energy.
By Nicole Hamilton

At the Best Friends Lifesaving Center in Atlanta, Sandy Saffold is a known as a volunteer who does it all. You can usually find Sandy in the cat rooms, where she’s either happily cleaning or working with shy cats to help them feel more confident and relaxed.

“She’s also a volunteer mentor and ambassador, she does laundry and deep cleans the cat rooms, and fosters kittens,” says Carol Atwood, volunteer and foster coordinator. “Her commitment and generosity to Best Friends is humbling.”

When Sandy’s not volunteering, you’re likely to find her blazing over trails on her mountain bike or running in her neighborhood near the center.

Recently, while on a run, Sandy had an idea: What if she took a dog from the center out with her? She shared her idea with the staff, got the green light and (as they say) hit the ground running.

Turns out, Sandy was really on to something. Her canine running companions loved it, and it showed. “They’re much calmer for adoptions after a run,” says Sandy, “The first time you see dogs get adopted the day or two after you ran them, you are hooked.”

Sandy knew more dogs would love to go for runs, so she worked with the Best Friends staff to form a volunteer running club at the center. To get the club started, she and the center staff first identified dogs who would be good candidates for a run. Then they established guidelines to ensure the safety of runners and dogs.

With the help of a few runner friends, Sandy mapped out several running routes of one, two and three miles and the “doggie dash” running was launched. Today, the group meets one Saturday each month, but volunteers can run with a dog on the established routes at any time. “It’s fun to see other runners get excited about the same thing that made me start the program in the first place,” says Sandy. 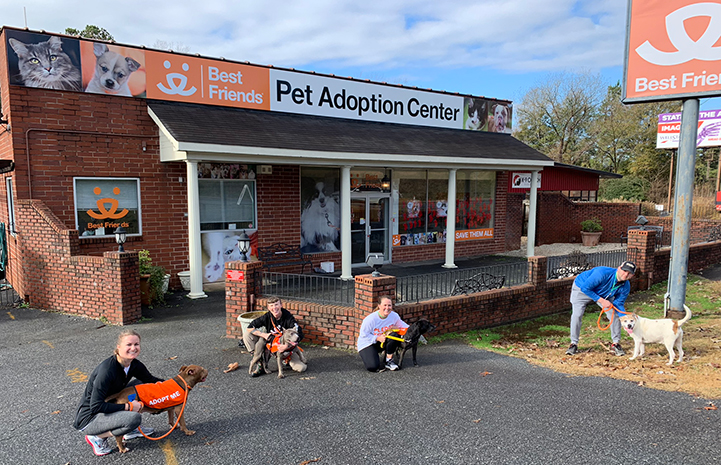 The running club officially kicked off a couple months ago, but already volunteers are averaging about 20 miles a week on multiple runs with different dogs. And while it’s a great way for humans to get in shape while giving back, the canines are reaping the most rewards.

All dogs who take part in the runs wear an “adopt me” vest to help connect them with potential adopters. Other benefits include getting fresh air and exercise, and practicing their leash skills by learning how to stay alongside a running buddy.

Fun things to do with your dog

Here’s more about why Sandy volunteers at the center and out on the trails in her running shoes.

Animals have no voice to ask for help and even if they could, they are mostly so trusting they wouldn’t ask for help. We have done this to them as a society. Growing up, I remember going to department stores and pet stores and seeing dogs and cats for sale.

There is a shift happening though organizations like Best Friends to fix the damage, but it’s going to take a village. I’m happy to be part of that village in a small way, and I’m motivated to continue because I truly feel like I’m a part of Best Friends’ goal to make the country no-kill by 2025. 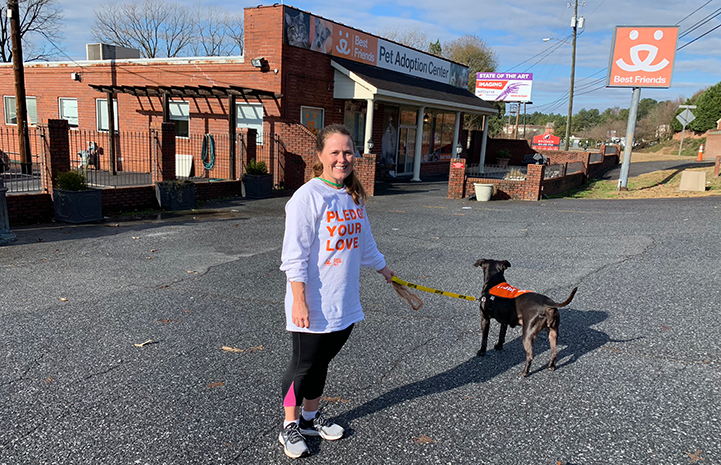 What have you learned and do you see anything differently since becoming a Best Friends volunteer?

Everyone has a different idea of the perfect home for a pet. Not every pet will be treated like you might treat them, but they will be alive, taken care of and loved. We need to make sure we are not judging our adopters and holding them to our personal standards.

Seeing the doggie dash program grow from my personal Saturday runs to a full-on running group has been rewarding. We’ve noticed that the dogs are more relaxed and interact better with adopters when they release their pent-up energy on a run. I love seeing a dog I took running get adopted the same day.

Tell us something we don’t know about you.

My parents owned an arts and crafts store since I was born. I learned how to spell my name by stamping in leather and other crafts. I learned a good work ethic very early, as mom had us running the cash register as early as age 12.

What do you like to do when you’re not volunteering with animals?

Do you have pets?

I have three now. Diva is a beautiful black exotic kitty with pumpkin-orange eyes. I rescued her at four months after someone paid $1,200 for her and dropped her off at a shelter because their kids were allergic.

Chester was a stray cat hanging around my neighborhood while I was trying to catch a kitten outside before she got pregnant. After successfully trapping, spaying and finding a home for the kitten, Chester still hung around. Today is his five-year “gotcha day” anniversary.

Rocky is my foster fail, who I adopted from Best Friends after fostering him along with his two brothers. All of them got sick, and unfortunately, the other two kittens didn’t make it. Rocky was a fighter and spent three days at the veterinary hospital. When he got home, I had to feed him every two hours and give him several different meds for several weeks. When it was time for him to go to the center, I just couldn’t live with the fact I might not ever see him again. So, I adopted him.

Do you have a super power?

Being able to connect with the shy animals.

People ask me why all the time and the answer is always the same: It’s just what I do. It’s a great way help those animals I can’t take home. 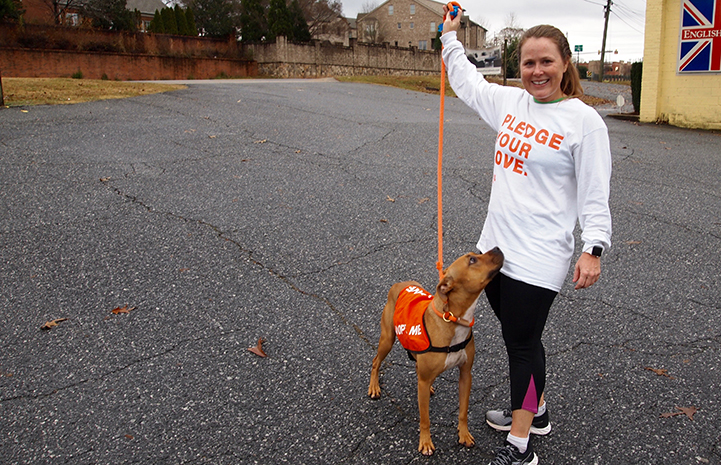 Do it for the animals. Be part of the solution.

Volunteer near you. No sneakers required.