Volunteering for homeless pets as a nonprofit volunteer

“I wanted to give back, since they gave me such an awesome little buddy,” says Samantha Long, explaining why she began volunteering for the shelter where she adopted her cat, Cooper. Now a few years later, she continues to help homeless animals by volunteering for nonprofits, which includes her efforts on behalf of Best Friends.

Experience of a lifetime volunteering

Samantha’s father works at the hotel that hosted the 2013 Best Friends No More Homeless Pets Conference in Jacksonville, Florida. Knowing her love of animals, he gave her a volunteer recruitment pamphlet for the convention. She jumped at the chance. Having recently graduated from college, she was eager to augment her resume and make connections with folks in animal welfare.

A woman of many talents, Samantha was perfect as the volunteer team lead. Her volunteers were well-informed, helping attendees get the most out of the event. However, Samantha got far more out of the conference than just volunteer experience and networking opportunities. She developed a true passion.

“Those moments of being in a room where everyone feels the same way you do are just awe-inspiring – thinking that saving them all is actually an achievable goal,” says Samantha. “It was the greatest experience of my life.” 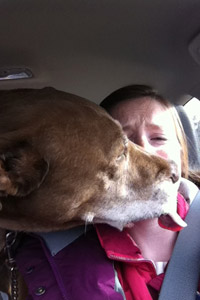 After such an exceptional time at the conference, she felt the draw of the Sanctuary. So she recently made the trip to Kanab, Utah. In fact, it was her first solo trip as an adult. And the adventure started before she even arrived, as she saw mountains and snowfall for the first time.

While the scenery was breathtaking, she came for the animals and spent a week cleaning in Cat World and walking dogs in Dogtown. The highlight of her trip had to be her three sleepover guests. Foley and Neptune provided plenty of feline cuddles; however, it was Chief the dog who provided a moment of hilarity that she was able to capture for posterity.

While stopped at a stop sign after picking him up, she posed her camera for a selfie with her canine companion in the backseat. Wanting him to look forward for the picture, she said, “Chief, look.” However, he had ideas of his own, and instead of just looking over, he took the opportunity to launch himself into the front seat and cover her face with kisses. The shutter button wasn’t quite fast enough, so recorded an image of Chief with his tongue ready to go.

“He just loves to give kisses,” says Samantha, who must have had the cleanest face in town that morning when she returned Chief to Old Friends after a full evening of smooches.

And she’s putting her conference experience to good use as the volunteer committee chair at the next Jacksonville Strut Your Mutt in September 2014. Her job is to delegate volunteers to the various committees. She encourages everyone to sign up, noting there are certain benefits in volunteering to help animals.

“Animals really do need a voice, someone who can actually help them,” says Samantha, “and you’ll probably find your best friend through volunteering.”

Photos by Molly Wald and courtesy of Samantha Long