Volunteering with horses at the Sanctuary

When plans for an overseas vacation fell through at the last minute several years ago, Megan and Matt Claflin scrambled to find an alternative. The couple had recently seen an episode of National Geographic’s DogTown, featuring the dogs rescued from Hurricane Katrina. Since Matt is from Baton Rouge, and Megan lived in the area too, it struck a chord with them. “We called the Best Friends volunteer department,” Megan says, “and within 24 hours, we were here at the Sanctuary.” 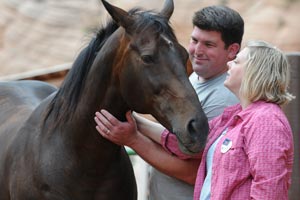 That first trip was an eye-opener for the Missouri couple. Though they have two rescued Great Pyrenees dogs at home and had done some transporting for rescue organizations, they had little experience working with other species. They took full advantage of the opportunity to get to know the Sanctuary and the animals who live here. And it couldn’t have worked out any better.

Since then, they’ve gone from volunteers-by-chance to dedicated returnees and spent time in almost all of the animal areas. Returning recently for their third volunteering trip, they arrived in town on their joint birthday. But they weren’t expecting any cakewalk. This time around they decided to spend more time volunteering in Horse Haven.

Volunteering with horses, and saying hello to an old friend

On a particularly hot summer day, the Claflins had their work cut out, helping with feedings and mucking out pastures. However, the first order of business was to say hello to an old friend, Curly Sue, a horse who won them over with her friendly personality during their last visit. She became their favorite when she walked right up to them and stuck her nose in their pockets, searching for goodies.

Curly Sue happily welcomed her friends back, especially since they had brought her breakfast. “We almost didn't recognize her at first,” Megan laughs. “When we first met her, the weather was much cooler, and she had her distinctive long, curly coat.”

Besides Curly Sue, the couple named other Sanctuary favorites like Barney, a sweet older dog, and Dixie, an older girl with one eye and “tons of personality.” Megan also says the stories they’ve heard in Parrot Garden have warmed their hearts, and that she and Matt love revisiting their favorite animal areas. “The best is hearing about the improvements the animals have made or the adoptive homes they’ve gone to,” says Megan.

Horse Haven, though, appears to have worked some special magic that keeps drawing Megan and Matt back again and again. Since both of them work in the corporate world and wear suits to work, they are more than happy to dress down and get a little red dirt on their clothes. “We love the fact that we can heft hay bales, and we’re willing to work hard and do everything,” Megan says.

For the Claflins, who really value the interaction and knowledge they gain from being around the horses, spending time in Horse Haven is a must during every trip. Matt recommends that other volunteers experience it as well. "There’s nothing like it; it's a great way to capture the peace of the canyon."

As for that missed overseas vacation several years ago and landing at the Sanctuary instead, Megan says, “There is a reason for everything, and it absolutely worked out.”

Get more information about volunteering at the Sanctuary.