Image
Hurricane Harvey dog comes to Best Friends' emergency shelter in Houston with a dislocated hip and heartworm, but he's got a bright future now.
By Nicole Hamilton

Whenever Harvey hears the whistling wind or a loud clap of thunder, the first thing the young dog does is check to make sure his family members aren’t frightened. The sweet, sensitive dog has been through a lot in life, but without any special training, he’s become a source of calm to his new family.

Harvey knows storms well. In fact, he was named after last year’s Houston-area hurricane that left him homeless and injured. But with help from Best Friends in both Houston and Atlanta, Harvey was able to put the past behind him and move on to a great home where he’s cherished.

Harvey arrived at Best Friends’ emergency shelter in Houston with a dislocated hip. And if that wasn’t enough, he also tested positive for heartworm. This combination of medical issues was challenging, but he’d made it to just the right place where his life would get a whole lot better.

Though every effort was made to locate Harvey’s family, no one came looking for him. Because he needed expert care for the heartworm disease and the dislocated hip, he was soon on his way to the Best Friends Pet Adoption Center in Atlanta.

“Harvey was really sweet and friendly, but also quiet at the center,” says Nichole Dandrea, the center’s social media community manager. “He had a calm demeanor and loved everyone he met.”

Harvey bounced back quickly after his hip operation and when his tests revealed he was heartworm-negative, it could only mean one thing: He was ready for his forever home.

When an adopted dog is just what the doctor ordered 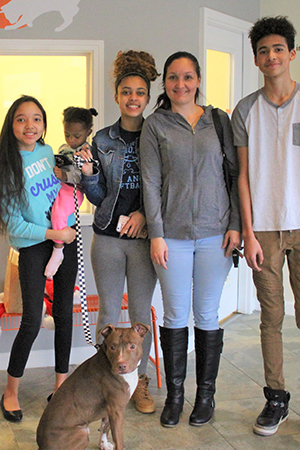 While Harvey was healing at the center, a college sophomore named Lani who lived nearby was also in need of some sunnier days. She had been feeling the pressure of school and each day her mind was growing heavier with worry.

Lani and her mom, Tiffany, knew there had to be a something that would help ease her anxiety; so, they visited the family doctor, who suggested the best medicine couldn’t be found at the pharmacy, but rather at a nearby animal shelter. What Lani needed, he said, was to adopt a dog.

Tiffany admits the doctor’s advice gave her pause. Adding another dog to the home would mean a very full household, which already included Lani, her two siblings and Tiffany’s goddaughter. Plus, they have a three-year-old dog named Ginger and a bunny.

Still, she thought the doctor’s idea was a great one, so she visited the Best Friends Pet Adoption Center in search of a dog to fit right in with her big family.

A dog’s daily dose of love

When Tiffany met Harvey and learned about his background, she knew she wanted to give him a home, but the final decision was Lani’s. So, the next day she brought Lani and her siblings to the center and introduced them to Harvey. Lani admits she was a little skeptical at first, but then she learned more about his past. “I felt like I could relate to him,” she says, “because we’ve both been through tough situations.”

Harvey’s long journey to a new home was finally over. He left the adoption center that day, ready for new beginnings with his big new family.

Bringing out a dog’s calmer side

Lani says Harvey fit in right from the beginning. “He’s just very sweet and loves attention. And he’s hungry no matter what time it is.”

Harvey’s companionship has been just what the doctor ordered. “Helping him makes me take my mind off things,” says Lani. “He’s very loving, and it makes me proud and happy that I could bring that out in him. It’s uplifting to be there for him.” 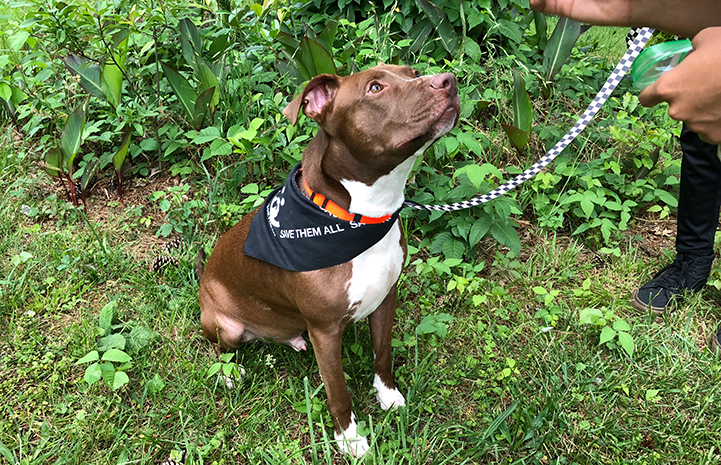 Everyone feels good when Harvey is around

As it turns out, everyone in the household has been feeling a little better now that Harvey’s around, including his new canine sister, Ginger. 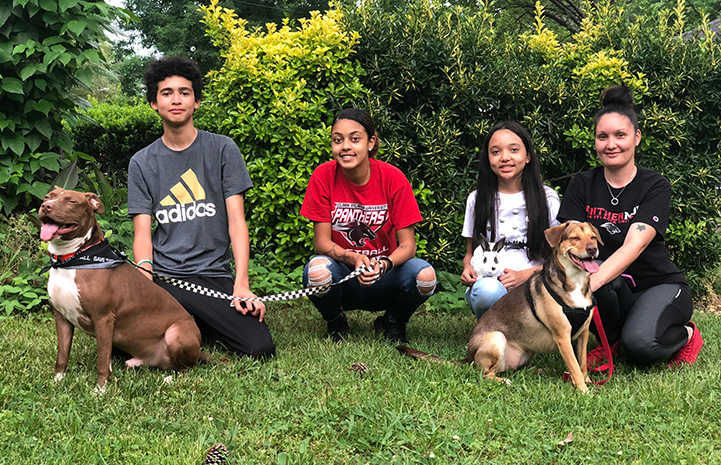 “Harvey makes her come alive,” says Tiffany. “Now she’s got a playmate, and it’s good for her. Harvey has been good for all my kids. We’ve got a pretty chaotic household, and Harvey fits right in. We love him.”

Harvey has been good for Tiffany, too. She’s taken some cues from the dog, especially on how to help Lani. “He’s opened my eyes to a lot of coping mechanisms,” says Tiffany. “I watch how he helps calm Lani down and how he can sense, before anyone else, when Ginger is scared, and it has made me more aware.”

Of course, being a single mom can be hard sometimes, and Harvey makes sure to give Tiffany lots of love when she needs it. “When I’m feeling overwhelmed, he’ll come over and sit on my feet,” says Tiffany. “It has really helped me to have him here. It’s beautiful how he senses how everyone feels.”

Nobody could have predicted that Harvey, found in Texas after an epic storm, would someday live in Atlanta. But that’s where he is today — inspiring an entire family to keep focused on the bright road in front of them.

Donate to Best Friends to help dogs like Harvey 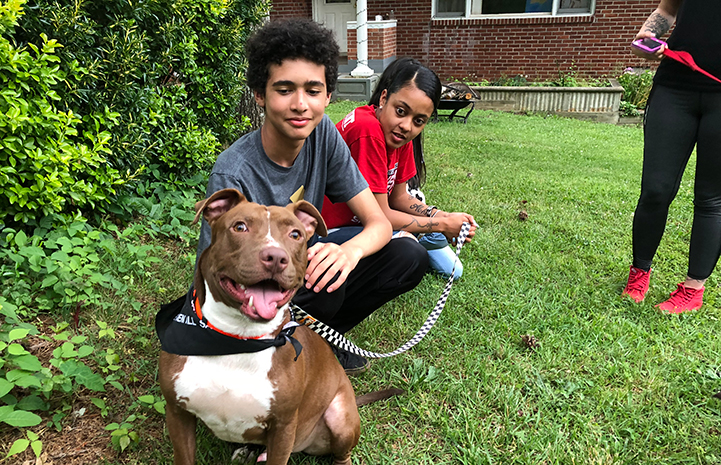