Weekend away makes a world of difference for energetic young dog

Image
When the COVID-19 pandemic began, Amber and Vince Krzys made it their mission to foster Raven and dogs like her who come to the shelter with unknown histories.
By Nicole Hamilton

When Raven first came to the Best Friends Lifesaving Center in Los Angeles, the young Labrador mix found life outside of a home to be a challenge. As a lover of life and everyone in it, she couldn’t wait to make friends and explore the world beyond her kennel space. When she couldn’t, frustration got the best of her and caused her to lose her trademark joie de vivre.

Raven was brought to Best Friends from Los Angeles Animal Services, and while little is known about her previous life, it was evident when she first arrived that somewhere along the way she either picked up some bad habits or simply never learned how to remain calm in a world where everything excited her.

She’d nip at the leash when it was time for a walk, and she preferred greeting people by jumping on them. That didn’t go over well with those who didn’t know her. But Raven never came across as unkind or threatening, and the dog behavior team wasn't worried. They had a plan to provide an outlet for her insatiable curiosity and endless energy, including daily playtime and plenty of lessons to help her learn new skills.

“Getting her out into regular play groups was key to helping her burn off her excess energy and frustration,” says Janelle Metiva, the center’s dog behavior specialist.

After a few weeks, Raven seemed more relaxed and it was easier to see what an affectionate and kind dog she truly is. But although she was making progress, there was still an obstacle between her and a new home. While everyone had gotten to know Raven’s quirks in the center, it remained to be seen if that might or might not be different in a home.

In Raven’s case, the team was missing some information that could be valuable for potential adopters. For example, how well-behaved was she in a home? And, how did she handle being home alone?

What Raven needed was time in a foster home where these and many more important questions could be answered. Without a little time away from the center, she might not have gone from available to adopted so easily. 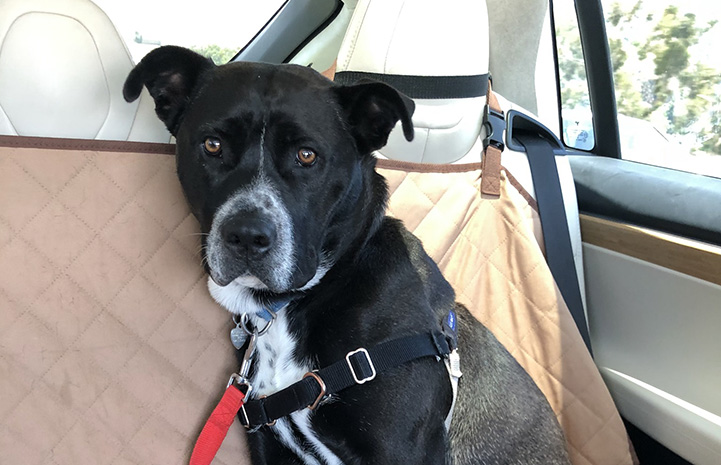 A brilliant idea to help dogs with an unknown past

What can you learn about a dog in two days? A lot, according to Amber Krzys, a longtime volunteer who fosters Best Friends dogs with her husband, Vince. Back in late March, when most of L.A. shuttered temporarily to slow the spread of the coronavirus, Amber and Vince found themselves at home with more time on their hands than they’d bargained for.

Then they had an idea: What if they fostered a different dog from Best Friends every weekend, with preference given to dogs (like Raven) who arrive at the center without any history of being in a home.

During these weekend sleepovers, Amber and Vince could document everything they learned through photos, videos and notes. All the information could then be shared with center staff and passed on to possible adopters. And since Amber and Vince (both experienced in adoption) have a guesthouse for their foster dogs, they could also help animals who could only be adopted into a one-dog home.

Amber and Vince presented their idea to the team, got the green light and began welcoming a new dog every weekend, with special focus on dogs without documented history. So far, they’ve fostered 14 dogs since the pandemic, documenting their progress, and plan to continue their work.

“Adopters and new fosters really appreciate knowing what to expect in the first 24 hours after they bring a dog home,” says Janelle. “Having that information puts their mind at ease, even if the dog isn't a perfect angel.”

[How Amber and Vince adopted Parker, a “class clown” dog from Best Friends] 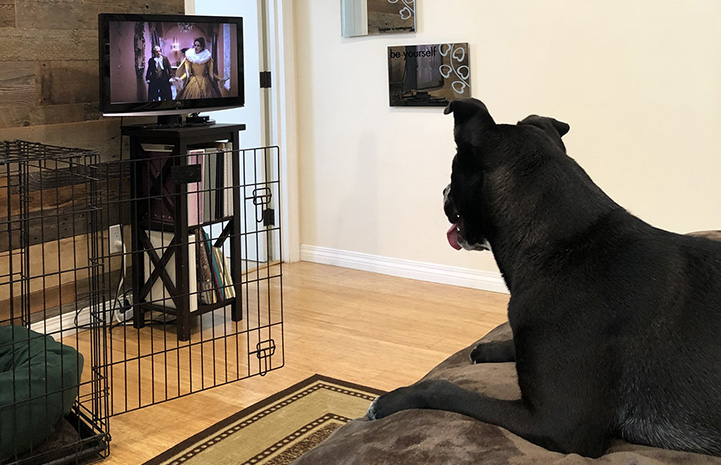 From anxious dog to confident dog

Amber wasn’t that familiar with Raven when she brought her home for the weekend. And the times she saw Raven during her volunteer shifts, her impression was that Raven was kind, but often stressed. But that impression changed as soon as she walked through the front door of the Krzys’ guesthouse. There, she became confident and ready to take on the world ― or at least the backyard.

For two days and nights, Raven got to snuggle up on the couch after a long day running around in the yard, and she also helped Amber while she worked. After only one night, Amber and Vince delivered a unanimous verdict. “Raven is everything a dog should be and more,” says Amber. “She is the quintessential sweet, snuggly, loving girl.” 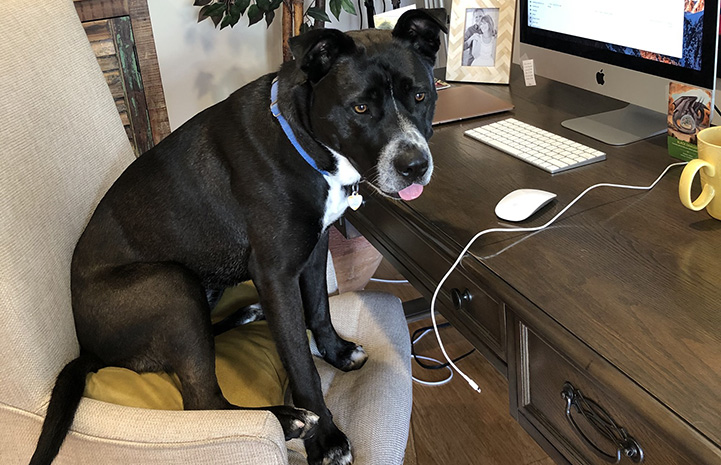 After her weekend away, Raven went back to her routine at the center with a little more ease, and soon after her return there was a new development. She had captured the attention of Dawn Guest-Johnson and her family, who learned about her while looking online for a dog to adopt.

With the center closed because of the pandemic, Dawn and her two young boys met Raven during a virtual meet-and-greet from the comfort of their home. Her sons loved Raven’s energy, so they set up a time to meet the dog in person and talk to the adoption team.

What Dawn loved most about Raven was how sweet she was with her boys, although at first, she was tentative about adopting such an energetic dog. But her hesitation faded when she realized Raven would make a good running buddy. It was a match, and soon Raven was on her way to her new home.

As for Raven’s weekend away, Dawn says Amber’s notes have been key to helping her get to know Raven more quickly.

[Read Mustard the dog’s diary, penned by her foster mom] 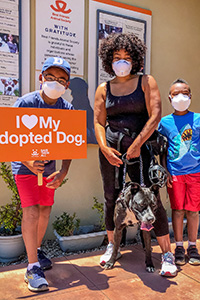 At first, Raven appeared anxious in her new home, but she wasn’t the only one. Symba, the family cat, wasn’t too keen about living with a big, energetic dog like Raven. But the nerves didn’t last. After just a few days, Raven and Symba became good friends.

“We learned early on that our energy had to be calm with Raven,” says Dawn, who is working on building Raven’s trust. Raven is excited by little things, such as seeing airplanes in the sky and spotting other dogs who growl at her or approach too quickly. “We are working on this,” says Dawn, who has been taking advice from the center’s behavior team. So far, the advice has been working.

Now Raven wakes Dawn up at 7:30 a.m. on the nose for an early run. They also walk at night and play fetch several times a day in the backyard. And if she’s not working out with Dawn, you can find Raven with her best friends — Dawn’s two sons.

“She likes to chase my boys while they are swimming,” says Dawn. “She practically wants to do anything they do and be where they are at all times. She’s an amazing dog and we love her a lot.”

Recently, two more of Vince and Amber’s sleepover buddies were adopted. “Both of these dogs had zero in-home notes before spending a year with us,” says Janelle. “I think that having the notes from their sleepovers was absolutely key to getting them out of the center and into a home.”

Got a weekend to spare?

Fostering pets truly saves lives, and it doesn’t have to be a long-term commitment. Check out how you can help pets in need where you live.