No More Homeless Pets Network partner Whatcom Education's Spay & Neuter Impact Program (WeSNiP) in Bellingham, Washington, has been working diligently at spaying and neutering the companion animals of the county and beyond for the last five years. 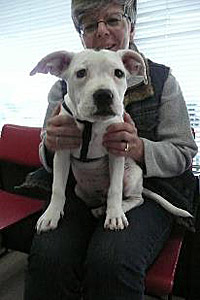 One of the founders, Patricia Maass, was a volunteer with a local shelter for a few years when she noted that the number of healthy animals dying in the shelter system wasn't going down. She also noticed that the groups weren't working together as well as they could. Not one to give up, she began a foster program for Whatcom Humane Society. Within three years, there was a foster network of over 40 homes, but still the number of cats dying in the shelter was higher than ever.

She started investigating effective spay/neuter programs, and the Humane Alliance Model Clinic resonated with her for addressing their area's needs. Karen Mueller, DVM, reached out to Pasado's Safe Haven and found out they had a mobile spay station they weren't using. Since they wanted to be able to help as many animals as possible, rather than join an existing group, they decided to form their own so they could assist all the other organizations.

The original program had the spay station and funding from Pasado's Safe Haven. Then the next year, they were able to use the spay station, but the funding was cut. So they partnered with Emergency Care Clinic and used their facility during the day for spay/neuter surgeries. In 2011, WeSNiP added a trap/neuter/return (TNR) program and expanded to transporting animals out of rural areas for spay/neuter. They started seeing a drop in euthanasia rates at the local shelter right away. They knew they were on the right path.

"The shelter wasn't full anymore. After the first few years of doing TNR in the area, we saw a 40 percent drop in the number of feral cats being killed at the Whatcom Humane Society," shares Patricia, who is enthusiastic about the progress but knows there is more to be done.

"We saw a big drop in the number of animals being killed," she says, "but we knew there were still animals out there that weren't being spayed and neutered due to obstacles that their guardians couldn't overcome alone."

Zeroing in on progress with grant

Patricia talked to their animal welfare colleagues and learned that out of 40 spay/neuter vouchers that went out, only six or seven were being redeemed. So they employed more focused strategies to help the neediest of households. And to this end, they reached out and received a Best Friends 2012 Lifesaving Grant in partnership with PetSmart Charities. 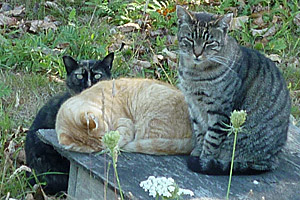 The grant enabled WeSNiP to target low-income apartment complexes and trailer parks, where the local animal control has no services for cats, and to use the endeavor as an opportunity to educate the residents. The money provided 183 spay/neuter surgeries.

"This is why we do what we do here at WeSNiP, and continued funding by organizations such as yours will allow us to continue our efforts and make even more of an impact. Your grant has also aided in our efforts to improve our transport program."

No More Homeless Pets Network manager Ellen Gilmore is also thrilled with their achievements: "WeSNiP's program is an excellent example of a project that identified the reasons why animals were being killed in the local shelter and then worked to resolve that cause. We're very happy that our grant program has been able to support that work."

As WeSNiP goes forward, they will be focusing on TNR and transport to continue to help those who need it most.

Get information on how you can support the work of WeSNiP.

Find out how you can get involved with a No More Homeless Pets Network partner in your area.