Wild cottontail bunny turns out not to be

Image
Cottontail look-alike proves he's no wild bunny. He is, in fact, a domestic rabbit who was found outdoors and thought to be wild.
By Christelle L. Del Prete 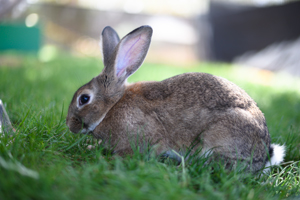 Sometimes, it takes a little while for a bunny’s true colors to shine through. That was certainly the case for MacGruber, who came to the Sanctuary when he was just a baby. He was found outdoors after apparently being attacked by another animal, and since his chances of survival were slim unless he got help, he came to Best Friends.

Wild cottontail bunny ... or so we thought

MacGruber went to Wild Friends, Best Friends’ state and federally licensed wildlife rehabilitation and education center, because he was a wild cottontail bunny. Or so everyone thought. He certainly looked like a cottontail, with his grey-brown fur and his puffy white tail. And, since he’d been found outside, there was no reason to believe that wasn’t exactly what he was.

In fact, MacGruber looked so much like a cottontail that for several weeks he passed for one. But then Wild Friends caregivers began to notice that, although injuries to his eye and his leg were healing perfectly, something just wasn’t right. MacGruber wasn’t developing like a normal cottontail. He was growing to nearly twice the size of one. As his ears kept getting longer and his body grew in size, there were other signs that he really wasn’t what he seemed to be.

Find out about Wild Friends at Best Friends

When it comes to cottontails, explains Wild Friends caregiver Stefanie Rolston, it doesn’t matter if they've been raised by humans since they were babies. Eventually, they “wild up” and become scared of people. For MacGruber, however, there was no wilding up. He only became more and more curious about people and, instead of hiding from them, he seemed to want to make friends.

So, instead of releasing him back into the wild once his injuries were all healed, Wild Friends staff called in Jason Dickman, manager of the Bunny House, who confirmed their suspicions. MacGruber isn’t a cottontail at all. He’s a domestic bunny.

Cottontail look-alikes who are domestic bunnies 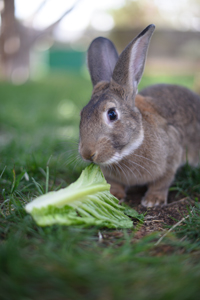 “There are some rabbits bred to look like cottontails,” Jason says. “But MacGruber is pretty social and not skittish.” Besides his ears and body being much larger than those of a normal cottontail, MacGruber’s tail (despite its seemingly classic “cotton ball” look) is also longer and straighter.

With his identity confirmed, MacGruber was soon on his way to the Bunny House, where he’ll stay until he gets adopted. Although he’s not changing colors (his fur will stay the same brownish-grey of his wild cousins), his days of being mistaken for a cottontail are over. Because staff were able to identify that he wasn’t a wild animal, he can look forward to life in a home as a much-loved pet.

Adopt a bunny or other pet from Best Friends