Image
Best Friends has animals for adoption that many some consider wildlife and unusual: ducks, pigeons, peafowl, roosters and more. Adopt an animal today.
By Ted Brewer

It may be one of the best-kept secrets at Best Friends. Whatever could you be referring to, you may be wondering.

Wild Friends doesn’t just rehabilitate injured and orphaned wild animals — it also adopts some of the animals it cares for. Currently, Wild Friends has, if you can believe it, between 120 and 130 animals up for adoption — mostly pigeons, but also ducks, roosters and peafowl. In the past, Wild Friends has adopted box turtles, domesticated turkeys, monitor lizards, fat-tailed geckos, ferrets and other exotic or domesticated animals who, for one reason or another, wound up at Wild Friends. 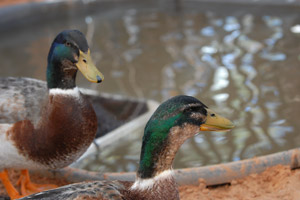 "Ducks are interactive," she says. "They will carry on a conversation with you. They’ll follow you around. They’ll feed from your hand."

Carmen once went on a two-day road trip with a group of ducks, transporting them to a family in California adopting them. She says the ducks responded to just about everything she said during the entire trip, inflecting their voices every time in a different way. And they had a comment for just about everything they passed.

"Whenever you work with waterfowl, you get accepted into the flock," she says. "And so you’ll be included in the social interactions."

Like any animal, ducks share certain personality traits, but that doesn’t mean ducks don’t have their own individual personalities. Nor does it mean all ducks get along with each other. 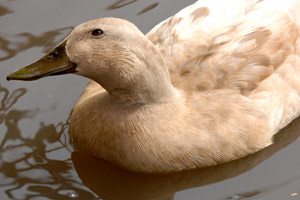 "Those personalities have to be figured in when you’re putting groups together," says Carmen.

The seven ducks available for adoption compose three groups — two pairs of two and one group of three. One of the groups is composed of two Pekin ducks Carmen and Best Friends’ wildlife rehabilitator Barbara Weider rescued from a precarious and potentially dangerous situation.

An ATV user passing a small reservoir near Best Friends noticed the two ducks standing between the dam and a cliff. The motorist called Wild Friends, and Carmen and Barbara drove to the spot and found the two were stuck along the ledge of a cliff, surrounded by the dam, the dam’s spillway and a waterfall dropping from a rather high cliff. The ducks wouldn’t allow Carmen and Barbara to come close enough to grab them. Thankfully, they brought the net and were able to scoop the ducks up and return them to Wild Friends safe and sound.

And though they haven’t been named yet, they are both up for adoption — as a pair. 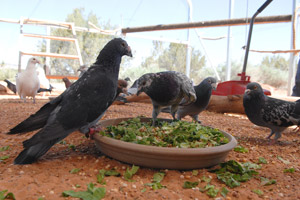 In addition to the ducks, Wild Friends has any number of pigeons up for adoption. Barbara has a soft spot in her heart for pigeons — she became a wildlife rehabilitator partly as a result of an injured one she found on the streets of Brooklyn. She says that even city people, used to thinking of pigeons as "flying rats," start to like them once they spend some time with them.

"Pigeons are fun to watch interact with each other," she says. "They have a lovely, peaceful sound. And they all have distinct personalities. They’re emotionally self-sufficient if they have other pigeons to hang out with. They’re very low maintenance." 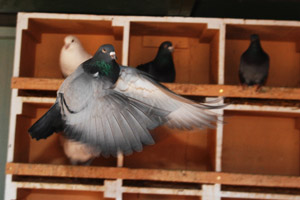 All that’s required for having a flock of pigeons is food, water and adequate shelter. Carmen says that, for a flock of up to six pigeons, the birds will need an enclosure that’s at least 16 by 8 by 8 feet. Some special needs pigeons do just fine, however, in a bird cage, and Wild Friends has plenty of special needs birds available.

Wild Friends also has three roosters available for adoption. Saruman, Gandolph and Sam need, however, to be adopted individually or otherwise kept apart at their new homes. They’ll do just fine with two or three hens, and certainly help increase their production of eggs. 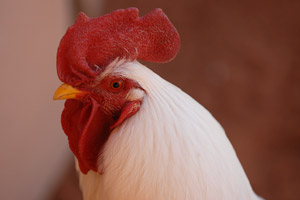 And finally Frank, Topaz and Aretha — three peafowl — are all available for adoption as well, but all three would need to stay together.