Do you know if your city, county or state has breed-discriminatory legislation (BDL) on the books? What would you do if you found out that a law changed and suddenly you were breaking a law just for sharing your home with your dog? People across the country have faced that very challenge, putting their pets at risk.

Thirty-six cities, four counties and six states have thwarted BDL or passed preemptive legislation to keep it at bay with help from Best Friends Animal Society and our pit bull terrier initiatives. One of the latest endeavors of the initiatives has been to help draft Missouri’s House Bill 1116, dubbed Winston’s Law. The bill, introduced in January 2014, is making its way through the legislative process, all in hopes of keeping communities safe — without employing misguided breed bans. 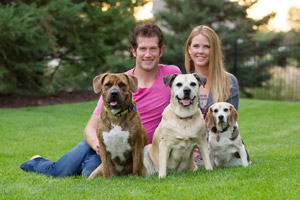 Best Friends got involved in drafting Winston’s Law when Clayton, Missouri, residents Kelly and David Backes reached out to Ledy VanKavage, Best Friends senior legislative attorney. David, captain of the St. Louis Blues hockey team, and his wife, Kelly, are staunch animal advocates; they’re also the founders of Athletes for Animals. They were surprised to learn that Clayton had BDL on the books when they signed up to join a new local dog park. Clayton had language in their animal control ordinance that automatically labeled pit bull terriers as dangerous dogs.

The way things stand in Missouri now, any local government can ban or restrict any breed of dog they want, even though studies show that the most effective and comprehensive dangerous dog laws are breed-neutral. The best laws focus on the behavior of the owner and the behavior of the dog. Clearly the law had to change.

This was an important matter that needed to be addressed at the source: community safety legislation for the whole state. The kind of legislation that would make owners responsible for their animals’ behavior and override any piecemeal laws penalizing particular dog breeds. With Ledy’s expertise, a bill could be drafted, but it would need a sponsor.

In a stroke of luck, it turned out that Winston, one of Kelly’s foster dogs, had recently been adopted by the brother-in-law of Representative Ronald Hicks of Missouri.  When approached about sponsoring the bill, Rep. Hicks saw a great opportunity to join the 17-and-counting states that have outlawed some form of BDL. 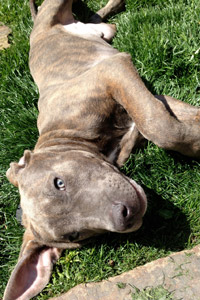 Rep. Hicks believes people’s pets are family. He says, “I can see how animals can be brought up to be mean. But it’s the person’s fault, not the animal. It’s the people that need to be held responsible, and that’s the reason I believe Winston’s Law is important. Also, overthrowing all the BDL will save the state a lot of money; it’s win-win for everyone.”  He further explained that citizens should be able to have whatever breed of dog they want and that having restrictions actually prohibits getting an under-socialized dog what he or she needs most – more safe experiences with other dogs and people.

The momentum is building. According to Rep. Hicks, “The emails keep coming in.” Best Friends crafted and sent a member message, and animal advocates supporting the bill are getting the word out via social media. Hicks adds, “People are saying ‘thank you’ in droves, from not just Missouri but around the country. I’m thrilled to have introduced a bill that has so much support; this says to me I’m on the right path. I’ve been elected to serve the will of the people, and the people want safety laws, not breed-discriminatory laws.”

The momentum in Missouri has already made a big impact in Clayton. On January 28, 2014, the Board of Aldermen voted unanimously in favor of repealing the breed-discriminatory language in their animal control ordinance.

Join the Best Friends Legislative Action Center and get email alerts to help you let your elected officials know that the welfare of animals is important to their constituents.

Get more information on how you can join Best Friends in helping pit bull terriers.