Image
If you visit the Sanctuary wearing a zippable sweatshirt, please visit Abu the dog and his little friends. November 15. 2010
By Best Friends Animal Society

With the changing of the seasons it’s always important to the fashion-conscious to take note of new trends and styles. As far as Abu the Chihuahua is concerned, nothing says trendy like a zippable sweatshirt with room for a dog just his size to snuggle in! 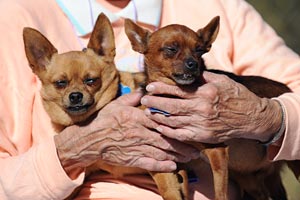 Abu came to Best Friends along with Magoo, Monty, Crow, Julia, and Spice. They were all taken from a hoarding situation in an animal control case. They lived inside the house 24 hours a day, seven days a week. As such, none of them had much experience with the outside world (or with house-training). In addition, they didn’t have much experience with people. One of the main downsides to such overcrowded conditions is that the animals can’t receive adequate love and affection. Sure enough, when they reached the Sanctuary just a short while ago, these dogs were more than a little nervous around people.

And yet, you never know what a change of scenery can do for you. After arriving at the Sanctuary, these six friends started to realize life was a lot bigger than they’d ever imagined. They began making full use of the indoor/outdoor access and had a blast exploring every inch of their spacious play area. Before long, a couple of them started to realize that petting and affection are not so scary after all. 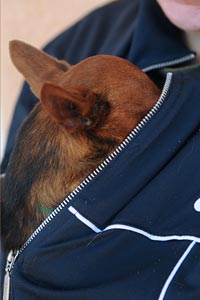 Abu is head of the class so far as that’s concerned. Though he used to skitter away when people entered the room, he changed his MO soon enough. Once he experienced what it was like to be petted and — joy of joys — to sit on a lap, well, he decided there was no going back. Nowadays if somebody sits near Abu, he jumps into their lap for cuddling. Recently, a volunteer with a zipper sweatshirt sat down and Abu climbed right into the sweatshirt the whole time she was there. He couldn’t have been happier!

Spice is another in the bunch who has come a long way. She used to hide under her bed when a person approached, but she soon took a cue from Abu and started checking out people. In the beginning she was mostly curious -- that grew quickly to excitement. Now she’s a huge fan of jumping into laps and making up for lost time in the TLC department.

Not all the dogs have come quite so far yet, but they’re figuring things out. 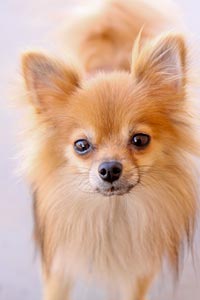 , for instance, tends to camp out in the background when a new person shows up, especially if that new person happens to be in a standing position. (Ever think about how tall a standing person must look to a chihuahua?) He’ll stay that way for a little while until the visitor takes time to sit down and wait quietly. Eventually, even Magoo and the others will warm up and approach for some pets.

The thing is, if practice makes perfect, every last one of these dogs will be champion snugglers in no time. In addition to all the TLC they receive from dedicated caregivers, they have already become favorites among volunteers. Seeing so many new people all the time — new people who want nothing more than to make them feel safe and loved — has done wonders. Of course, there’s always room for more volunteers.

So if you’re planning a trip to the Sanctuary, consider carving out a little time for this small group who needs a lift. As one final detail, if you happen to have a zip-up sweatshirt in your wardrobe you wouldn’t mind bringing along, Abu promises to love you forever!