Image
Providing love, patience and understanding, woman fosters and then adopts a feral dog found roaming wild on a ranch in California.
By Raven Chiong

From the moment they arrive at Best Friends Animal Sanctuary, homeless pets receive all the medical care, TLC and training they need to help them feel safe, comfortable and happy in their home-between-homes. Foster homes are a key part of helping pets at the Sanctuary as well.

There are shy dogs and there are feral dogs — those who have no experience at all with humans. My dog Bean was found roaming wild on a ranch in California with his brother, Bingo. They had been on their own for years, fending for themselves among chickens and other animals. Once they were humanely captured and transported Best Friends, it became immediately apparent that they lacked even the slightest amount of socialization with humans.

Bean struggled more than Bingo did around people. I met him after approaching one of his caregivers about the possibility of having an office dog where I work in the planned giving department at Best Friends. Although Bean was not ready to be an office dog, his caregiver didn’t waste any time matching him up with me for some extra help. With my first glance at this wild-eyed dog, stiff with fear, I fell in love.

How to help shy or feral dogs

Initially, I visited Bean for short periods of time and attempted to hand-feed him meals and treats so he would gradually start to associate people with good things. Because of his background, Bean has excellent self-preservation skills and deep sensitivities. His intelligence is both a blessing and a curse. While it served him well in the wild, all the noises at the Sanctuary were overwhelming to Bean. He was very shut down. After weeks of trying, and despite my best intentions, Bean was more mistrusting of me than ever. Every time a dog barked, the phone rang or the wind blew, Bean retreated to his safe corner, curled into a tight, self-protective ball and refused to eat.

Clearly, something else was needed. That something was a foster home.

As it turns out, my three rescued dogs and I were able to provide Bean with precisely what he needed most: a quiet, peaceful, stable, warm and comfortable home with companionable dog friends for reinforcement and security. Being in a new place was scary at first, of course. Bean cowered inside his crate under my desk for the first 20 hours before eventually venturing out with the assistance of my sweet Chihuahua mix, Buddy, who anchored himself next to Bean for added reassurance. 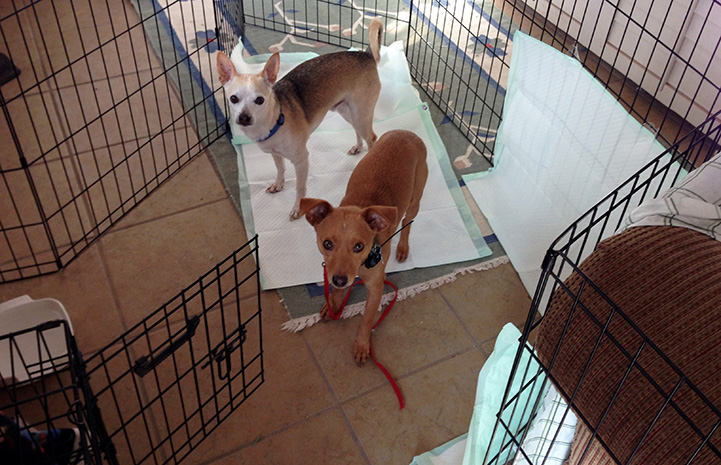 Although I had planned to take some time off from work to help Bean settle in, everyone agreed that a dog like Bean would be better off left alone with his canine companions — without me. Surprisingly, it took only a few days for him to start to relax in his new surroundings. After tentatively peeking his little nose out the back door, afraid to step out of the house, Bean mastered the ins and outs of the doggie door. He quickly learned our evening ritual of gathering in a circle, sitting and waiting for ... hmm ... what else? A treat of green beans.

Still, there were shadows of his past. When I inadvertently moved too fast or too soon with his leash training, Bean bolted, racing around the fence line, until he eventually “pancaked” his body in resignation and rolled over in silent surrender. Even after four months in foster care, the mere sight of a leash still caused Bean to beat a hasty retreat. How could such a terrified dog ever find a home?

If home is where the heart is, Bean was already there. Bean, my sought-after office dog turned foster dog, was in our home and hearts forever. While he took up residence in my heart from day one, it was a fitting day when I finally signed the adoption agreement to make him an official member of our family.

Now, when I come home, he is calmly perched beside his siblings in the front window, waiting to greet me. He runs toward me instead of hightailing it in the opposite direction. I can walk by his bed without him darting away in fear (well, most of the time). Now, he no longer sleeps with one eye open, and has, in fact, claimed the coveted love seat as his own. He bravely struts, wags and does full-body wiggles through the front door in playful anticipation instead of fearful hesitation. Now, he is learning that car rides can be fun and is even finding his voice. He joins the chorus of his brothers howling like coyotes in the front window whenever I take his sister out, solo, for a quick potty break. 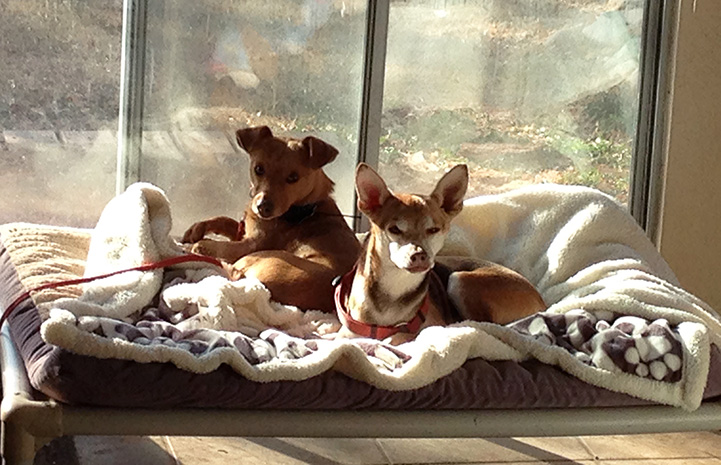 Bean and his new brother Sage are the class clowns of our family. Bean greets each morning with play, tossing his toys in the air, making monkey sounds, zooming, leaping on the bed, play-bowing, prancing and being a carefree, secure dog for the first time in his life. He makes me laugh. He brings me joy. And now he often approaches me, unsolicited, and touches his nose to the back of my knee. Perhaps it’s a shy dog’s version of a kiss — a brave, gentle nudge from behind. 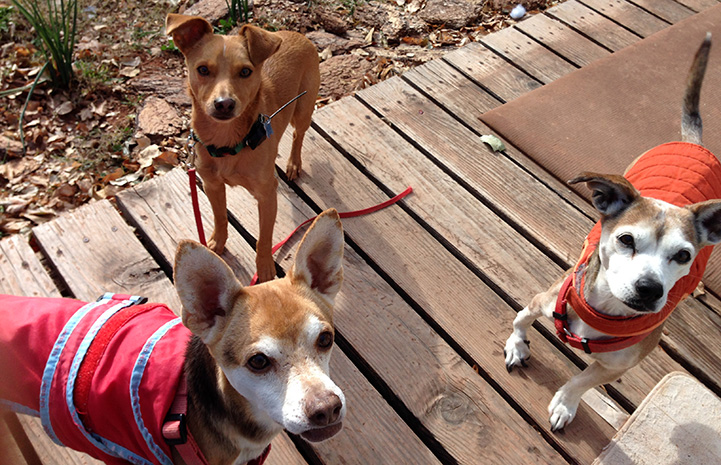 While such behaviors are not monumental for most dogs, for a feral dog like Bean and for most shy dogs, they are signs of remarkable progress and healing. Bean’s story is a perfect example of how such dogs do not “show well” in shelter environments. But with time, patience, respect and understanding, their true selves eventually emerge. Given his feral past, who knew Bean would ever be such a homeboy?

Bean may not ever be a lap dog, and he may never walk well on a leash. Time will tell. I have dreams of Bean romping with me and camping under the stars. I want so much to hold him and pet him. Perhaps someday. For now, I do my best to heed the lessons he teaches me about living in the present moment. I continue listening to Bean and giving him the freedom and agency to be himself, erring on the side of caution and helping him succeed. 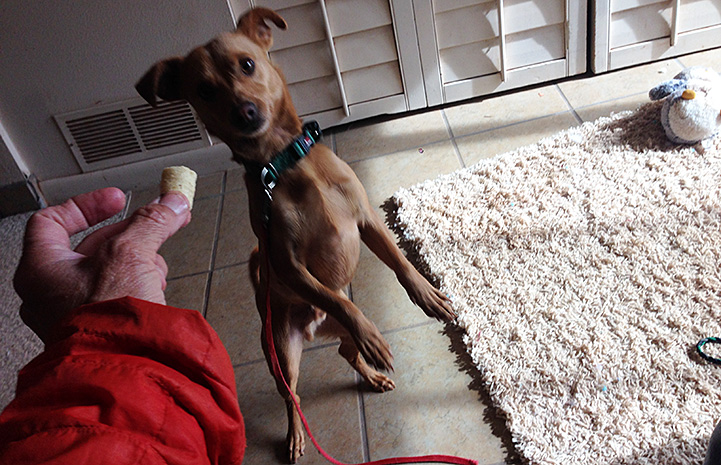 I wrote a poem for Bean, and these are my favorite lines from it:

I bring you home,
To have, without possessing,
To hold, in sacred reverence,
To honor your untamed Spirit,
To earn your trust
To love you,
My Dear Cimarron,
On your own time and terms.

And Bean, being Bean, returns the gift of a home 100-fold. 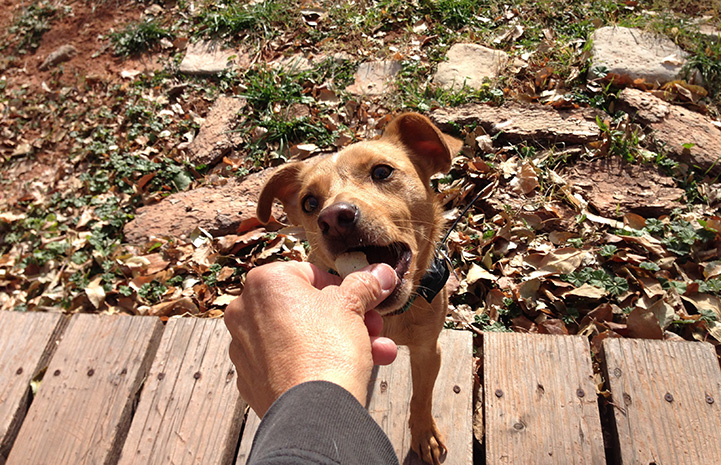