We’ve all heard the adage “what doesn’t kill you makes you stronger,” and last October a hardworking rescue group was challenged with that test. In a freak accident, a school bus crashed through the front of Wright Way Rescue’s adoption center in Niles, Illinois. No people or animals were hurt, but it threw the group into emergency mode. With instant community support and a grant from Best Friends, the group showed that a challenge couldn’t hold them back. Now, they’ve already set their sights on a new goal, and they need support in spades to get there. 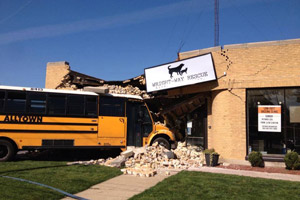 Soon after the accident, with the adoption center’s walls crumbling and a gaping hole around the yellow bus, firefighters arrived and began moving pets in crates to safety in the parking lot. It was a stroke of luck that all the animals and people were OK, but, as Christy Anderson, founder of Wright-Way Rescue, said at the time, “We have nowhere to go.” They needed a safe place for not only their current charges, but also the many animals who would die in area shelters if Wright-Way couldn’t take them. The group monitors approximately 20 animal control and municipal shelters, saving the animals who need it most. With animals’ lives at stake, they needed help and a plan — fast.

Best Friends assisted by awarding Wright-Way Rescue (a No More Homeless Pets Network partner) an emergency grant to help them with what they needed immediately: adoptions. Ellen Gilmore, the Best Friends staff person who handled the case, says, “We wanted to help this group because they are completely aligned with our mission; they’re saving animals from dying in shelters, and we didn’t want this accident to affect that.” Best Friends was able to provide further assistance by sending out a message to our members advertising the adoptable animals to supporters in the area. Wright-Way Rescue’s staff and volunteers wasted no time; they set up tents in the adoption center parking lot and held an adoption event just three days after the bus crash. 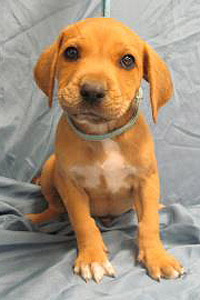 People came out in droves to adopt, eager to help the group in its time of need and also to bring home an adorable new pet, like puppies Disco and Macarena, who both got adopted. By the end of the day, every single pet there found a home. Christy is thankful for the financial boost from Best Friends that helped keep their adoptions going strong when they needed it the most. She says, “It was amazing how Best Friends helped us out in our time of need.”

A bright future for Wright-Way Rescue

Wright-Way Rescue has moved into a donated temporary warehouse, out of which they’ve been operating since shortly after the crash. Now they’ve set their sights on a new facility in nearby Morton Grove, and are scheduled to move in the spring of 2014. They are actively fundraising to make the necessary renovations to their new building so they can hit the ground running.

Ellen calls Wright-Way Rescue an “exemplary” No More Homeless Pets Network partner. She says, “They’ve done a really professional, businesslike job of recovering from near-disaster, which is remarkable. They came out on the other side quickly and in a way that preserved their mission, and they didn’t really lose any time.”

Since the crash, the group has proved that, like the animals they help, they’re survivors. And thanks to a little help from their friends, they’ll keep doing what they do best: working overtime to get pets out of shelters and into homes.

Find out how you can adopt from, volunteer with, or donate to a No More Homeless Pets Network partner group in your area.