Tina Lockwood thought her eight-year-old twins, Brianna and Matthew, were just playing when they asked a visiting family friend if she'd like to buy some of their stuffed toys. They explained that they wanted to raise money and donate it to Best Friends to help homeless pets, particularly pit bull terriers. Tina and her friend laughed good-naturedly, and went along with the game. But, she says, after her friend left, "the twins continued to buzz about how they were going to set up all of their toy animals in our front yard so that they could have a sale to raise money for the Sanctuary." 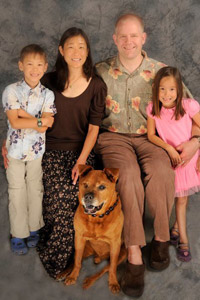 Brianna and Matthew's love for animals, especially dogs, no doubt began with their parents. Tina and her husband had adopted a rescued dog years before the children came along. They were hesitant at first. Tina remembered having a very difficult time when her childhood dog passed away, and her husband had never really been around dogs. But then they learned about Sweet William, a pit bull terrier and chow mix who had suffered horrific abuse. A rescue organization had saved him when he was a year old, and the Lockwoods adopted him when he was two. "He was our first child," Tina says.

Sweet William was five years old when Brianna and Matthew were born, and they formed an unbreakable bond with the gentle dog. As a result, they were devastated when, in spite of the family's valiant attempts to save him through costly medical treatments, Sweet William succumbed to cancer two years ago. The year following Sweet William's passing was especially difficult for Brianna and Matthew; losing him was like losing a big brother. But becoming involved in animal advocacy, particularly pit bull terrier advocacy, became a path to healing for the children.

The twins, particularly Matthew, felt inspired to help dogs like Sweet William, and began talking to their classmates about the discrimination that pit bull terriers often face. And, because the family resides in California, they were able to become involved in Best Friends' NKLA initiative, which is striving to make L.A. a no-kill city by 2017. 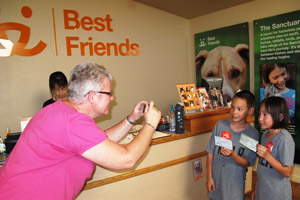 "We really fell in love with the concept of NKLA," Tina says, and the family wanted to do more to show their support. "We love Sweet William so much and miss him a lot," say Brianna and Matthew. "While we are here on earth, we will help as many animals as possible in memory of him." And that's what inspired the eight-year-olds to sell their toys so they could make a donation to Best Friends in Sweet William's name. Tina helped them by advertising their sale on her Facebook page, and helping them make up flyers that they distributed door to door in the neighborhood.

On August 5, when the family came to the Sanctuary, the twins presented two checks totaling $300. (The twins asked for 25 cents per toy, but many people generously donated more than this.) Though they did not meet the minimum age requirement for volunteering in Dogtown, Brianna and Matthew got a well-deserved tour of the Sanctuary. Matthew found the animals at Wild Friends, the wildlife rehabilitation area, fascinating, and, though Brianna favored Cat World, she later exclaimed, "I loved everything about Best Friends Animal Sanctuary!"

Though it may be a few years before they are able to visit again, the Lockwoods plan to walk in the upcoming Strut Your Mutt in L.A. with their foster dog, Willow, and the twins will continue their fundraising efforts. Says Tina, "I'm really, really proud of them for having the heart to help animals in need, for wanting to carry on Sweet William's name," and for letting their beloved pet "motivate them to help other animals."

Learn about visiting the Sanctuary and volunteering.