Image
Ten-year-old fifth-grader raises money to help dogs, cats and other homeless animals at the Sanctuary. Her whole family is comprised of animal lovers.
By  Christelle L. Del Prete 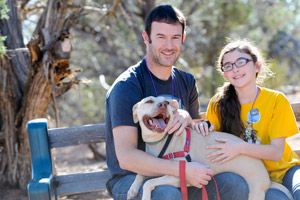 During a visit to Best Friends last spring, 10-year-old Riley Arnold took a Sanctuary tour and heard about a child her age who had done a successful “pennies for pets” fundraiser. Riley’s mother, Shannon, says that her daughter was “blown away by what she was hearing,” and decided right then that she would also raise money for the animals at Best Friends. Riley explained that she found the tour “really inspiring,” and that she “wanted to do something to help out” because she thought taking in animals who are hurt or abandoned was “a really good cause.”

When the family returned home to Salt Lake City, Riley immediately got started on her fundraising plan. As luck would have it, the family’s pastor, an animal lover, agreed to let her collect donations at the church. She set up a donation box and emailed friends and family to get them on board. From May through September, a special collection plate was passed around the church so that adults could donate, and children were able to contribute through Sunday school.

A matching gift for the animals

An anonymous matching gift of the first $200 was a big, unexpected boon to Riley’s efforts. Altogether this summer, she raised over $600 for the animals at Best Friends. Naturally, being very proud of her accomplishment, Riley wanted to return to Best Friends to present the check in person. To her delight, her proud parents agreed, and in mid-October the family headed back to Southern Utah so Riley could present her gift. But she wasn’t content to stop there. Now that she was at the Sanctuary, she wanted to spend some time with the animals.

A family of animal lovers 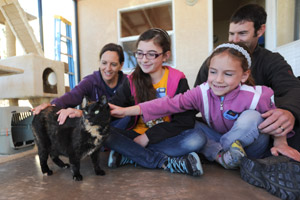 So the next day, the family volunteered in Morgaine's, a building in Cat World. Riley, her mother, father and little sister spent the morning playing with and socializing cats. They even got to take a pretty black-and-white cat named Amy for a stroll on her harness and leash. “It's been really fun,” Riley exclaims when asked about her experience in Morgaine’s. But she was also looking forward to that afternoon, when she and her father would volunteer at Dogtown.

The fifth grader, who called the Sanctuary “really amazing,” has high hopes for returning next summer. And she’s already inspiring other children to take action for animals – including her six-year-old sister, who is now planning to fundraise for Best Friends as part of a school project. Riley’s mother is a physical therapist who hopes to work with animals herself one day. She has no doubt her family will keep up their volunteering and fundraising efforts. "We are all animal lovers," she says.

Learn about visiting the Sanctuary.