Image
Young roadrunner is found emaciated, uncoordinated and weak. He is suffering from failure to thrive, but he'll get the help he needs.
By Sharon St. Joan

It was early morning in the dead of winter just outside the Best Friends clinic when someone spotted a roadrunner. He didn’t look right and seemed really weak and unable to fly.

When Troy Snow, a wildlife rehabilitator for Best Friends Animal Sanctuary rushed over to pick him up, he found a very cold, bird who, by the looks of him, had hatched the year before. It looked like a case of “failure to thrive.”

Every year a small percentage of fledgling wild birds just can’t quite manage to get the food that they need to develop and survive. Sometimes they do OK through their first late summer and early fall, but as winter sets in they fall behind and begin to lose weight and strength. A second chance provided by a licensed wildlife rehabilitator can give these birds a new grasp on life, and they do just fine when they’re released the next spring.

Emergency care for a wild bird

Troy took the bird Wild Friends, the sanctuary’s state and federally licensed wildlife rehabilitation area, and staff got to work trying to help the young roadrunner. It was clear that the little fellow was on his last legs, emaciated, uncoordinated, weak and had a pale mouth. His weight was at 200 grams when it should have been 350-380 grams.

The bird received emergency care and was placed in an incubator with oxygen and heat. And with that, the staff had done everything possible other than the next steps — monitor the young bird closely and wait.

After about a week, the roadrunner looked perkier and more energetic. He was more stable and began to gain weight. He spent the next two months inside where there was supplemental heat, and he made good progress.

After a while he became quite bouncy and when no one was looking he would even leap to the top of his enclosure and spend some time perching over the inside doorway. He zipped along from place to place, all the while having a good time. And he didn’t look tame at all, which was really great because if he was to survive after being released, he’d still need to be a wild bird. 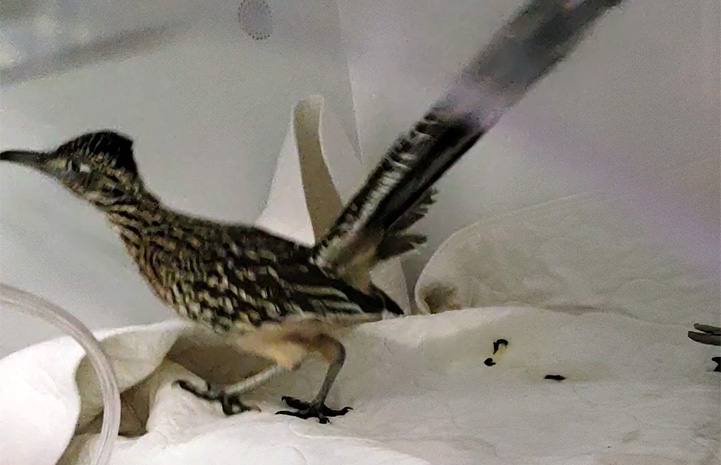 Roadrunners are birds of the Southwest that about two feet long and very striking in appearance with a crest. They don’t fly much, and when they do it’s not very high off the ground. They tend to run at high speed along the desert ground or even on the roads — hence, the name roadrunner.

Like most birds, they mate for life. In the spring the young male will find a high perch (sometimes on top of the roof of a house) and do a loud and very mournful-sounding mating call. He will keep calling all day and nearly all night. If there aren’t many roadrunners in that area, it can be up to a few weeks before a female takes notice of his beautiful voice. With all that incessant calling, both the young bird and any humans living nearby might get the impression that the female will never, ever, arrive. But eventually, she does. She introduces herself, and then they happily run off together to build a nest and start a family.

When spring finally arrived, the roadrunner was full of energy, had a bright look in his eyes and was ready to go. After exactly 100 days in rehabilitation, he couldn’t wait to be back in the wild, especially after spending the last month in a 20-by-40-foot songbird flight.

It was time for a soft release, a process whereby the door to his enclosure is opened and caregivers leave the premises so he can go when he is ready. The bird is allowed to come and go as he wishes until he completely gets his bearings about being out in the wild again.

All this roadrunner needed was some extra time until, once again, he was ready for a life of adventure as a wild bird.

How Best Friends helps get wildlife get back on their feet 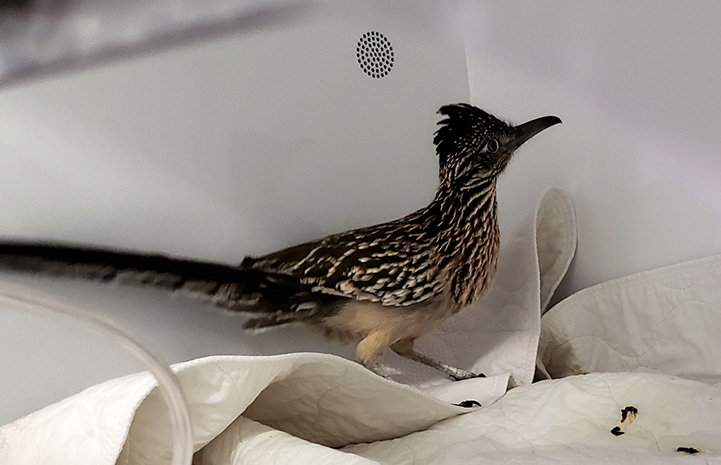