Ohio House Bill 14 has been in the works for a long time, but the landmark legislation that will bring an end to Ohio’s dubious distinction as the only state in the Union with a statewide breed-discriminatory law against pit-bull-type dogs is almost the law of the land in the Buckeye State. HB 14 passed out of Senate committee on January 10 and is on its way to the full Ohio Senate for a vote.

If you live in Ohio, your continued support is still important. Please send a message to your senator to support HB 14 when it comes up for a vote by going to the Take Action for Animals webpage and clicking on the “Save Ohio Dogs” link.

You can read more about HB14 in our original blog post on the subject, below, reposted from February 2011. 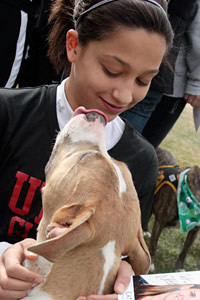 Under current Ohio law, pit bull puppies are deemed to be vicious dogs as soon as they are born.

The Ohio law is notoriously unjust, but help is on the way. The Ohio Coalition of Dog Advocates and Best Friends are spearheading the campaign to pass Ohio HB 14, which would repeal the only statewide breed-discriminatory law in the nation.

It’s actually a lot worse than that. The irony of all such breed-specific legislation is that it is anything but specific. In Ohio, as elsewhere, the breed of your dog is not determined by her genetic heritage, but by the opinion of a dogcatcher — and that’s scary. In a recent study of shelter workers’ ability to accurately identify breeds of dogs visually matched against a DNA test, shelter workers failed miserably, with a score of 25 out of 100. Any dog that a dog warden (Ohio lingo for an animal control officer) decides upon a visual inspection could be a pit mix — that is to say, anything with a blocky head and a short coat, like maybe a boxer/Lab mix — can be declared a vicious dog and easily end up on the wrong end of a needle. Breed specific? 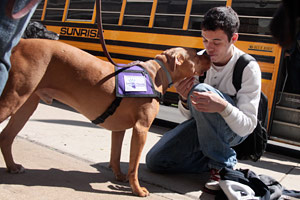 According to Jean Keating of the Ohio Coalition of Dog Advocates, “Pit bull owners have no due process rights and as such, many non-pit-bulls have been killed because they looked like pit bulls.”

And pity the poor pit who enters an Ohio shelter. Because pit bulls are deemed vicious, state law discourages their adoption from public shelters. It is certain death for pit bulls in most shelters and pounds across the state. The Ohio law requires owners to purchase liability coverage and maintain locked fenced yards or keep their pit bull or pit-bull-looking dog confined in a locked pen. Owners may take them off their property on a leash only if it is six feet or shorter and the dog is controlled by a person of suitable age and size. This law has led to the deaths of thousands of family pets.

HB 14 needs to be passed — and we need your help to do it, especially if you live in Ohio. The bill was introduced by Representative Barbara Sears (R-Lucas County) but is drawing strongly bipartisan support. Support HB 14.