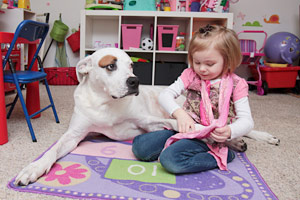 Update, 4-27 11:30 a.m. MT : It looks like the game is only temporarily down. The game developers say they're updating the game now and it will be back shortly. If you have yet not filed a complaint, please do so. We must keep the pressure on!

Update, 3:30 p.m. MT : Apparently we're hearing that the Dog Wars game is no longer available. We're working to confirm this and we'll let you know if there's official word from Google.

The kerfuffle over the misguided Android app “Dog Wars” has hit the mainstream and is getting coverage on major news outlets, such as MSNBC and Fox News.

Yesterday, my blog on the subject, which was intended to raise some hackles and get our dog-loving readers engaged in an effort to have the app removed from the Android Market, also raised the hackles of some dog-loving developers who felt that my caricature of the people who developed “Dog Wars” (weenie geeks with Cheetos-stained shirts, etc.) was a slam on developers in general. It certainly wasn’t intended as such. Here’s what I posted in reply to a couple of comments that got into the weeds on that presumption:

“My apologies to our developer friends! I meant no disrespect to developers in general.

“My comments were intended to draw a caricature of the type of cloistered individuals who are sufficiently out of touch as to think this game was a good idea. The developers of this game might not be a literal match for that caricature, but I still think that it works for their character.”

We also seem to have brought out the digerati among our readers who were concerned that our opposition to Android’s offering “Dog Wars” for public download amounted to censorship. This is a hot issue in techie circles, as Android is seen as the much freer marketplace versus the more tightly controlled Apple App Store.

Needless to say, I disagree.

The democratizing effect of the Internet gives a voice to non-news outlets, such as Best Friends, and it also gives the public the opportunity to express their views directly to big corporations, such as Google (n.b., we understand that Android and Google did not create this app or bring it to market, but it is their willing inclusion of this game on their virtual shelves that is the issue). This kind of free market expression is not censorship. If the animal-loving public has enough clout to get this app taken down, that will tell us something about the extent to which animal issues have penetrated the general consciousness and constitute a market force. If we don’t, that says something else.

In any event, if you have not done so yet, please read yesterday’s blog and then visit the Android Market and ask them to take down “Dog Wars.”