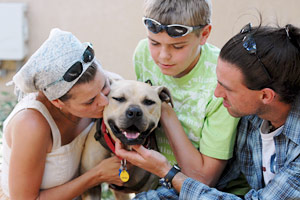 Looking for a great way to channel all that pent-up frustration and outrage over the hall pass being given to Michael Vick? Look no farther. The Big Brother of the Internet has declared war on dog lovers with one of its latest offerings.

The folks at Google/Android have a new killer app, as in this app will kill dogs, kill efforts to undo pit-bull terrier stereotypes and, oh yeah, kill any enthusiasm I was building to switch from my iPhone to an Android product when my current phone gives up the ghost.

“Dog Wars” is a video game about dog fighting. Here’s a blurb from the download site:

“Raise your Dog to Beat the Best!

A GAME THAT WILL NEVER BE IN THE iPHONE APP STORE!!!

Feed, water, train and FIGHT your virtual dog against other player’s... action games, chatroom, many characters and dogs to choose from, virtual store, etc.”

The developer, Kage Games, LLC, defend this garbage with the standard, “It’s only a game,” and, “Go complain about ‘Grand Theft Auto,’ ” a hyper-violent video game featuring street crime and urban slaughter. 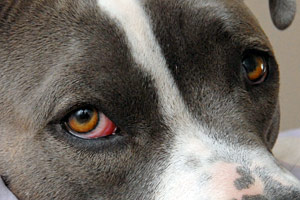 The “Dog Wars” promo page features a pit-bull-terrier-type dog with blood on his muzzle. I’m not a gamer, but the intention to cater to gangsta wannabes and other knuckleheads speaks for itself.

While most fantasy role-playing games are based on cartoon worlds and an unrealistic premise, like “Grand Theft Auto,” the world of dog fighting is neither outlandish nor unrealistic. Dog fighting is real. Dogs die and suffer every day, and the culture of dog fighting drives shelter populations of backyard-bred pits in cities across the country, leading to the killing of hundreds of thousands of pit bull terriers and their mixes every year.

Of course, the weenie geeks seeking to get rich by developing this stuff would likely wet themselves if actually thrust into the poverty and violence of the environments they depict, but what can you expect from young males who spend most of their time in a garage, basement or cubicle with Cheetos stains on their shirts.

However, this is no joke, and the fact that Google/Android sees fit to promote animal cruelty and criminal activity in this way either owes to the fact that they are utterly clueless or is a measure of their greed, bad taste and arrogance  – which of course are their right.

It is also our right to let them know how we feel.

Please fill out Google’s Android Market “Report Inappropriate Apps” form,
and ask them to drop “Dog Wars” in their product line. You can also write an email to Google’s press relations folks at press@google.com.

This is important, folks, and unless we speak out, dog fighting in our society becomes more ingrained as a social norm. Click here for "Dog Wars": Part II.