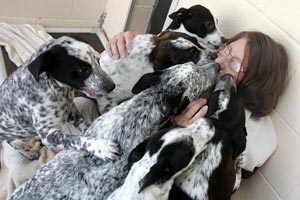 A change to the pet limit laws is in the works for Los Angeles City.  Current laws limit household pets to three dogs and three cats. The new law would up the limit to five and five.  If passed, this will have a massive impact on the 26,000 animals that currently meet their end in the Los Angeles City shelter system.  In a city of 8 million people, imagine if the citizens were allowed to have a few more pets each--26,000 animals would probably find their way into a loving home. This would be one powerful tool in our kit for achieving No More Homeless Pets in Los Angeles.

Taking the broader view, I’m not sure of the rationale behind pet limit laws and what they are meant to accomplish that other laws don’t already address.

All of that is covered by other laws...disturbing the peace, various public nuisance ordinances, leash laws and the like. 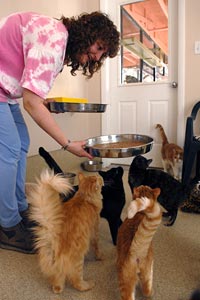 Neither New York City nor Chicago have pet limit laws...two cities where the living norm is side by side, top to bottom, stacked building complexes. You can have as many pets as you like in the Big Apple and the Windy City as long as the net effect doesn’t violate one of the laws crafted to help all those people who live cheek-by-jowl without getting on each other’s nerves.

1. They promote the needless killing of animals in our shelters.  Try adopting a fourth cat to someone in LA?  Who wants to willingly break the law and risk fines, penalties or impound?  Pet limits narrow the pool of adopters and those who want to save lives.

2.  They are intrusive. Of all the things government shouldn’t be interfering with, the number of pets we have must top the list. As long as we manage our pets responsibly and don’t intrude on our neighbors, who cares? And if we do intrude on our neighbors with noise, smell or dogs running at large, there are laws on the books to deal with these issues.

3. Pet limit laws are arbitrary. Traffic laws, for example are based on known data - the design limits of cars and roads, stopping distance, traffic volume, etc. There is no data to support the idea that a given number of pets are too many. The Joneses might be able to easily manage eight dogs while the Smiths are in over their heads with two!

4.  Pet limit laws have been ruled to be unconstitutional in some states. A Pennsylvania court found the following: “What is not an infringement upon public safety and is not a nuisance cannot be made one by legislative fiat and then prohibited,” the court quoted from an earlier case. “Further, even legitimate legislative goals cannot be pursued by means which stifle fundamental personal liberty when the goals can otherwise be more reasonably achieved.” Couldn’t have said it better myself!

If you live in Los Angeles please contact members of the Public Safety Committee and ask them to support raising the pet limit in Los Angeles.