Getting to know a dog 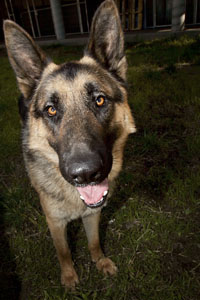 shepherd who came to the Best Friends Pet Adoption Center in Los Angeles from L.A. Animal Services, and then came home to stay.

Q ­— that’s his name — is a beautiful young dog. He is also brilliant. It took him all of two minutes to figure out how to open my office door, which opens inward. He noticed that when he pawed the lever-type handle, the door unlatched, but his weight on the door closed it again. He solved that problem by taking his weight off the door so that it wouldn’t re-latch and then he worked the crack in the door with his nose until it opened.

However, he apparently noticed that the humans don’t get down on all fours and nose the door open after unlatching it. No, they remain standing and pull the door toward them by the handle. A few attempts later and he was wrapping his right paw over the handle, unlatching it and then pulling it toward him while wrapping his left paw around the door itself and leaning back to open the door just enough to stroll through it. I’m pretty sure that’s the history of scientific innovation — a serendipitous discovery followed by proof of concept experiments, followed by ... freedom!

Q came from the North Central Los Angeles animal shelter. I was told that the person who turned him in pushed him roughly into the holding cage while complaining, “This dog doesn’t do what he’s told.”

The truth, of course, is that Q is a very intelligent animal. When people say that a dog doesn’t do what he’s told, it’s usually the case that the individual making that remark doesn’t realize that he has unwittingly trained the dog to behave in a manner that annoys him, or that he has been inconsistent and confusing in his communication with the dog, so the dog doesn’t know what is expected of him.

I am not a dog trainer by any stretch of the imagination, but I do know the basics and we have a household of dogs who are sufficiently trained to live with people, cats, other dogs and frequent guests.

Usually, I am assisted by our other dogs in educating newcomers to the family about household routines: use of dog doors, appropriate behavior around guests, where the essential business gets done and the established pecking order that makes for a happy house.

On this occasion, however, I spent my first three weeks with Q commuting 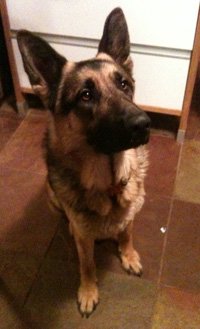 between a small apartment and my office at the Best Friends Pet Adoption Center. With no other dogs in the household, I had the unique experience — for me, anyway — of watching an incredibly intelligent animal figure out the relationship with no other dogs passing him notes about how to succeed.

While there are many variables within breeds as well as between breeds when it comes to personality and temperament, breed characteristics do play a part in how a dog negotiates his or her environment and builds a relationship with a human.

For example, while pit bulls seem to want to begin the conversation with their new person from a place somewhere on the person’s lap, shepherds seem to be watching and waiting for cues for the job you expect them to do. They are working dogs.

Being the learning machine that he is, Q stayed close and looked at me expectantly for feedback as we interacted, and he slowly released the stress of the traumatic changes he had been through. He was beginning to identify the role and responsibilities he expected me to pass along to him.

Walking him late at night around my North Hollywood neighborhood, his self-assigned role is that of guardian. He’s not aggressive, but he checks everything out and then looks back for approval of appropriate behavior. He positions himself quietly between me and any stranger who stops to admire him. Again, no aggression, just doing his job.

As we walk, his ears track sounds that I am not aware of and his nose reads the environment in ways I can’t begin to imagine.

Walking down those poorly lit streets, something remarkable begins to take shape: A pact between species is acknowledged, and Q and I agree on it. I offer him safe passage through the world of humans and he offers me an intelligent, decision-making, multi-sensory, self-powered, personal defense system with high-speed pursuit capabilities and big teeth. Oh yeah, he’s also extremely cute, affectionate and cuddly, and he runs on dog food. I don’t normally need a sophisticated personal defense system so I’ll settle for the rest of the package (but it’s nice to know it’s there if I ever need it).

In truth, dogs don’t need a utility quotient to be valued friends. It’s their unique ability and willingness to be a friend like no other that merits their place in our world. Most people don’t have animals around to do jobs for them; they have them around because they give so much more than they take. They bring out the best in us and allow us to be kind and generous with no greater ulterior motive than seeing a wagging tail and a happy demeanor. We are better humans when we allow a dog to show us what honesty of expression and mutual trust really means.

Q is a remarkable creature, but he is far from unique. Q is a shelter dog, and millions of dogs every bit as personable and sharp as he is never make it out of the shelter alive. That must stop: We have to end the killing of shelter animals.

The Qs of this world may be able to open some doors, but they need our help to get out of the shelter alive. Please join us in bringing an end to this injustice. Take the Best Friends Pledge to Adopt and pass it to everyone you know and ask them to do the same.