Kitty Kitty Bang Bang: what do Stephen Colbert, feral cats and a guy named LaVar have in common? 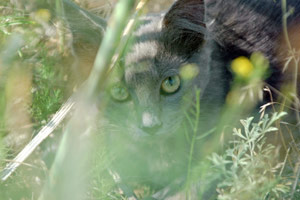 Ahhh ...  Utah.  As a current resident and native Utahn, I have a special relationship to this great state of mine.   Utah is a treasure trove of unmatched natural beauty, has some of the best skiing on the planet and most importantly, is well on the way to realizing No More Homeless Pets.  There's definitely a lot to be proud of in Utah, but sometimes in this square-ish (geographically speaking) western state, we mix the absurd with the bizarre.

The most recent round of Utah oddities is a piece of legislation introduced by Representative Oda, HB 210, which provides an exemption from cruelty charges for anyone who kills an animal, which he/she reasonably judges to be feral.   This could mean open season on granny’s outdoor cats with neighbor Zebediah’s latest Christmas gift --- a Browning 1911. (side note: currently there is a proposed law to make this fire arm the official gun of the State of Utah.  Yes I know--- state flower, state song…and now a state gun, of course!)   Representative Oda’s bill even made it to the desk of Stephen Colbert.

Last night dozens of Best Friends staff and volunteers, including Best Friends CEO Gregory Castle (read Gregory’s blog on HB 210) were up at the Utah State Capitol speaking out on behalf of Utah’s animals.   After an unusual and extended two-hour debate in the Utah House Judiciary Committee, a motion by Representative LaVar Christensen sealed the fate of HB 210 and struck language from the bill that would open the door for people to kill animals without a cruelty charge.

This effort combined with an unprecedented deluge of emails and phone calls from you, led to victory for the animals last night.   Indeed, one of the greatest things about Utah is the progressive nature of its animal-loving public and our collective drive to reach No More Homeless Pets.  For that, I am proud to call Utah my home.