A lesson in stereotyping 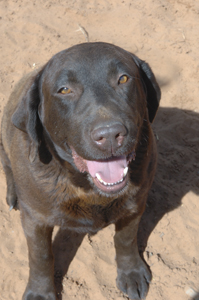 My colleague Holly Sizemore and I were driving together to a business meeting in Phoenix a few weeks back. It was dark as we passed down the highway that traverses the Navajo Nation, a wild and woolly area with a strange, almost haunted atmosphere.

Holly and I discussed how we both dislike driving this road at night, as there are often dogs on the road straying from wherever they call home. Sure enough, we soon came across a sad scene. One dog lay dead in the road — hit by a car. Two others sniffed their dead friend; one of them clearly had a paralyzed back end, presumably also having been hit.

We screeched to a halt, wanting desperately to get the two dogs off the road and away from the speeding traffic. We succeeded and eventually were able to get both dogs into the car and to an emergency vet in Flagstaff summoned for us by animal control. Sadly, an X-ray revealed that the paralyzed dog had a severely broken back, leaving him no chance of survival. We comforted him and wished him well as the vet quietly euthanized him.

The third dog was a big, bouncing, bumptious chocolate Lab, as friendly as could be. The animal control officer took him to Flagstaff Humane Society for safekeeping with a message that we would call them in the morning. After determining that we had a slot available at the Sanctuary for a friendly, adoptable dog, we visited the dog, now named Patch, on our way back from Phoenix, and made plans to get him to Best Friends after the statutory few days’ hold period.

At Best Friends, Patch has proven himself to be the almost perfect dog: friendly, loving, enthusiastic, but not overly so, and well behaved. “Highly adoptable, no problem,” the Dogtown staff told me. (Editor's note: Dogtown couldn't have been more right, Patch has gone to his forever home)

Walking away from visiting Patch, I realized he was forcing me to examine my stereotypes. I thought of Labs as very friendly, often goofy, and always out of control — sometimes wildly — but that isn’t so with Patch. Patch loves to play and greets you excitedly, but he can also be calm.

I confess my guilt. I’ve been thinking about this breed in exactly the same way that those who advocate breed-discriminatory legislation think, the same way people who ban pit bull terriers think, or believe rottweilers are dangerous, or Dobermans, or … whatever the vicious dog of the day is. In the same way that some people say all cats are aloof.

No, all animals are individuals. They have their own distinct personalities, formed by nurture a lot more than nature.

We do them a significant injustice if we forget that. And we deny ourselves the depth of the relationship we can have with them.