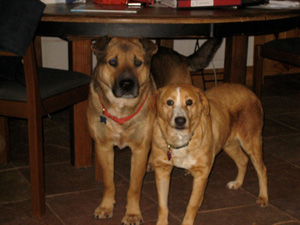 The Flintstones are Fred and Wilma, the two feral dogs, who came to live with Silva and me this past Monday. The pair isn’t truly feral. They just haven’t been socialized, stroked and generally loved on by people, but they seem to know their way around a house and understand who runs the can opener.

Fred and Wilma were part of the Mojave Desert Dogs rescue carried out by a team of LA rescuers.

Wilma barks at me when I cross the room with a characteristic “stranger alert” warning that sends the rest of our dogs charging to the outside fence to see who just arrived. She’ll be a great watchdog as soon as she gets her “friend or foe” radar properly tuned, which shouldn’t take but a few more rounds of feeding. From the looks of things, however, I don’t expect she will be spending much time outdoors as she is now firmly ensconced along with Fred under the big, round table in our living room.

Fred is more reserved. He looks like a shar-pei and German shepherd cross, with the lines and coloring of a shepherd, but with the jowlly face, triangular eyes and silly, little spinach-leaf ears of a shar. Really cute. He’s quite sturdily built, but when the pressure’s on, he hides his head, ostrich style, under whatever is handy, including Wilma. 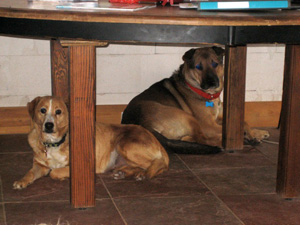 To make sure that they were oriented to our house before giving them the chance to fence climb or dig their way to the really wild west that surrounds the property and to let our eight other dogs get used to their smells and visa versa, we set up a jump-proof run inside our very large dog yard. After a few days of hiding and exhibiting behavior that was freaky and feral, they began to warm to Silva, whose quiet and gentle demeanor always puts shy animals at ease.

With a cold spell and snow in the forecast, we decided to take the leap this morning and let Fred and Wilma mix and mingle with the rest of the pack indoors. When we opened the back door to our house, we expected them to take off to the far corner of yard, about a 30-yard distance from the house, and then sit there, looking like their heads were coming to a point. To the contrary, as soon as the door opened, they entered what we call the dog room and made it clear that they didn’t want to leave. After a bit of head hiding, barking and milling around, they began to circulate through the rest of the house and then plunked down in the living room.

We’ve had a succession of feral and semi-feral dogs at our house going back to the early 1990s when we got Pebbles, a shar-pei/coyote mix who was trapped on a golf course in Englewood, California. (I guess we’ve had an unconscious Flintstones’ fixation for longer than I imagined.) Two others were personal rescues who were living in a large storm drain under the Santa Monica Freeway, another a beautiful red chow who came from a rescue, another a sweet boy from Dogtown and, most recently, a pit bull named Barney who came to us from the West LA Shelter. Barney is now helping to teach the new arrivals the ropes.

Bringing dogs like Fred and Wilma into your home is much easier than you might think if you have one or two other dogs in the family who are amiable, good with other dogs and firmly bonded to you. Watching extra-shy canines come around is one of the most rewarding experiences you will ever have as a rescuer or an adopter. All you need is a secure yard and some patience. You will see fear replaced with affection and appreciation, anxiety and uncertainty with an unrestrained joy, and you will have the additional satisfaction of knowing that you gave a home to a dog who many regarded as “unadoptable.”