EDIT: We have closed comments on this post. While we clearly are completely fine with conversation, the comments have become incredibly unproductive, accusatory and filled with statements that are just plain untrue. Best Friends is working towards solutions and attempting to learn from this tragic occurrence and ensure it never happens again. Patty Hegwood has offered to personally answer questions relating to this issue as we move forward, but what won’t happen is responding in the comments to these baseless accusations that are hurtful on many levels. That some are questioning our transparency and truthfulness, when all we have done is communicate each step of the way, is truly unfortunate. We thank everyone for their support and we will continue to post updates on the issue as they become available. 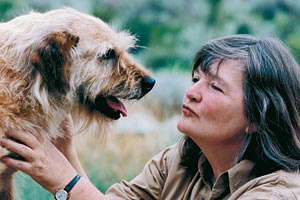 We had a very sad incident at Dogtown this weekend. One of the dogs escaped from his run, and while we can only speculate on the sequence of events, it seems that he broke into one of the runs of Tug, a dog rescued from the Michael Vick dog fighting case, who in turn broke into the run of Denzel, another of the Vicktory dogs. A fight ensued.

When the staff arrived for work early Sunday morning, they found the first dog deceased, while Tug and Denzel were in need of medical attention. We are relieved that both Denzel and Tug will make a full and complete recovery. Denzel is already back to his normal self today and Tug is not far behind him.

No one knows what triggered these events, but the staff did see deer tracks in the area. For most of the summer the deer go north and in the fall they return south. They are a fixture of sanctuary life in the fall and winter, but we suspect their return might have over stimulated the dogs to behave in this way.

All three dogs were housed alone and in separate buildings so it took a huge effort for them to interact. Dog fights create a lot of adrenaline energy and in my limited experience can bestow superior strength on the participants.

We are all deeply saddened by what happened to all three dogs and are conducting an extensive review into what might have caused this. We have already begun to take steps to additionally reinforce all fencing in the area occupied by our dogs that can only have supervised interaction with other animals, and we will institute an all night patrol watch.