Tell University of Nebraska Corn Hucksters: We Are Not Buying What You Are Selling! 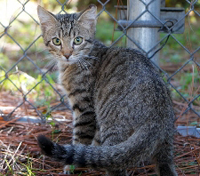 A recently published paper titled Feral Cats and Their Management, is getting some play by the media and being touted in Audubon Magazine as an authoritative study. The article released by the University of Nebraska – Lincoln Extension Service is biased work that includes a pest control contractor as one of the contributing authors.

The article primarily focuses on the supposed impact that free roaming cats have on wild bird populations and gives short shrift to TNR (Trap Neuter Return), the only demonstrably successful and humane form of community cat management.

The new twist to the Nebraska paper is that it attempts to quantify the damage in dollars. I would say that you can’t put a price on any life, but they do and come up with a nonsensical dinner tab for the ferals of $17 billion worth of birds!

Part of their calculation includes the fact that hunters spend $216 per bird that they shoot. Apparently it is better for the economy to save the bird from the cat so some guy in camo gear can blow him away!

In truth, the number one cause of songbird decline is loss of habitat due to deforestation, urbanization and development…followed by window collisions, especially with high rise glass buildings, wind turbine generators, common pesticides and lawn care products. Cats have not been shown to be a significant threat to bird species in any credible scientific study.

Although ridiculous, this paper is not funny. Among the ways that they advocate to control feral populations:

“Shooting is an efficient method to reduce populations of cats in specific areas. Use  shotguns with No. 6 shot or larger, .22-caliber rifles, or air rifles capable of shooting 700 feet per second or faster (inside 20 yards and with pointed pellets). Aim shots between the eyes or in the heart/lung area to ensure a humane death. Shooting in urban areas is a very sensitive matter as many safety factors need to be considered. Consult local officials to determine if shooting is legal in your area.”

In a previous paper one of the authors had recommended injecting nail polish remover into the chest / lung cavities of skunks as an acceptable method of “euthanizing” that particular pest.

The Audubon Society should be embarrassed and ashamed for referencing this nonsense and the University of Nebraska should be likewise concerned.

Each year hundreds of thousands of community cats are sterilized and 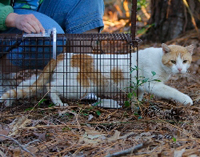 returned to their respective caregivers, never to breed again yet filling the niche in the neighborhood that would otherwise be taken up by other, as yet unsterilized breeding felines. Nature abhors a vacuum. If there is a food supply – a restaurant, grocery store or apartment complex dumpster, a rodent population (cats are rodent specialists) or the proverbial little old lady putting out a bowl of food on her back porch, removing one group of cats will only open the territory for others.

Catching and killing community cats is not only an unacceptable and inhumane approach, it does not regulate their numbers. Quite the contrary, if catch and kill worked, there would be no feral cat problem because that was the standard policy for decades prior to the growing implementation of TNR in the 1990’s.

The answer is TNR!