Vicktory dog Mya, known for her gentle, loving nature, passes away at 13

More than 11 years have gone by since the 22 Michael Vick dogs known as the Vicktory dogs  arrived at Best Friends Animal Sanctuary. Since that day in January of 2008, the dogs have traveled an incredible road of hope and healing, and their impact on the world has been immeasurable. They’ve become members of loving families and the focus of friendships among people who were once strangers. They’ve helped to change the public’s perception of pit bull terriers for the better. They’ve proven that dogs rescued from fighting rings can go on to live meaningful and beautiful lives.

The Vicktory dogs broke barriers and proved to the world that the canine victims of dogfighting rings deserved to be understood and evaluated as individuals. Prior to the work done with the Vicktory dogs, it was standard practice for all dogs rescued from fighting rings to be deemed inherently dangerous, with no chance to demonstrate otherwise, and they were simply killed. Mya and the rest of the Vicktory dogs proved to the world that that was not the case. They were heroes — and thousands of dogs from similar circumstances or with similar looks owe their lives and their happy homes to Mya and her friends.

None of the Vicktory dogs were puppies when they came to Best Friends, so many of them have succumbed to age or health issues. Each loss is heartbreaking to the people who knew the dogs personally at the Sanctuary, to their families and to the hundreds or even thousands of people who felt like they knew them through social media. The past few months have been particularly difficult: Sadly, on June 22, Layla passed away. Mel was not far behind, leaving the world on August 13. Now, we mourn the loss of Mya, who passed away on August 31 after a brief battle with cancer.

For Mya, the Sanctuary was home-sweet-home

Mya spent her life surrounded by love at the Sanctuary. Though she wasn’t ordered by the courts to remain at Best Friends for life, shyness and lingering fears kept her from successfully completing the behavioral test legally required for all Vicktory dogs to be eligible for adoption. Over the years, it became increasingly clear that the test itself was stressful for her, so Dogtown staff and behavior consultants decided to take a cue from Mya herself and dropped the idea of putting her through it again. Besides, the Sanctuary truly was her home-sweet-home.

Here, Mya had a family who loved her dearly, a constant canine companion (Curly, another Vicktory dog) and a predictable routine that she looked forward to each day. It is hard for people at the Sanctuary to think of Mya without Curly and vice versa. The two dogs lived together for years, and wherever one went, the other often followed. That was true for their golf cart rides, their hydrotherapy, their veterinary appointments and all their visits to Sanctuary offices. 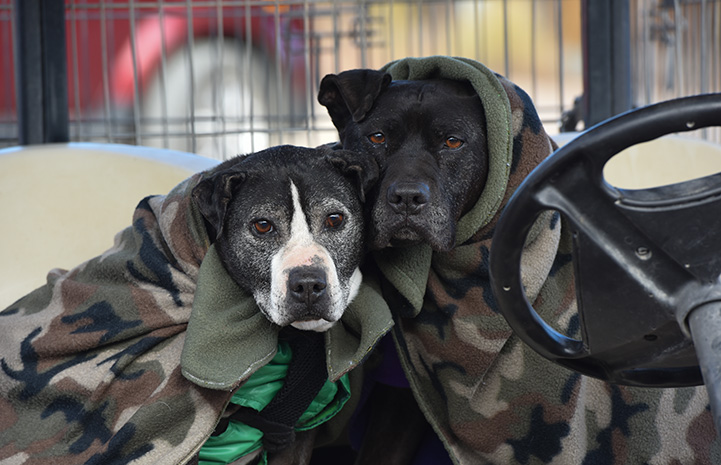 On most mornings, Mya and Curly would be chauffeured on a golf cart from their room in Dogtown to the Dogtown managers’ office. For the past two years, they spent two or three days a week in the office of Michelle Weaver, director of animal care, who was the manager of Dogtown back when the Vicktory dogs arrived. In the evenings, they were escorted back to their room. This was Mya and Curly’s routine, and they had settled into it very happily and comfortably. 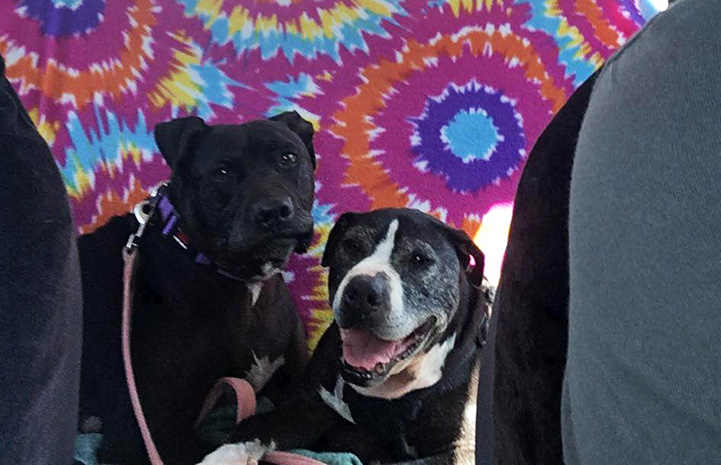 “Mya loved going on golf cart rides, and she loved going to the offices,” says Dogtown caregiver Ramsey Schatz. “It was the only time Mya would do a full-body waggle. Even if she was inside, she knew when someone was coming to pick her up for office time, and she’d get so excited.”

Dogtown behavior consultant Rebecca Woodruff says Mya was a different dog at the office. “She was shy in her room at Dogtown, but she was friendly and would ask for pets when in the office.” That’s probably because it was so much quieter at the offices, with no noise from other dogs barking and the same people always there. At the offices, Mya could unwind and let her guard down.

Laura Rethoret, an executive assistant who works alongside Michelle Weaver, cherished the time she spent with Mya and Curly. “For the past eight years,” she says, “I have spent time with them and have loved them, appreciated them and laughed with them. Mya was my girl, and I loved her so much. Curly will still be coming to our office and will be loved and cared for as he has been every other day of his life here.” 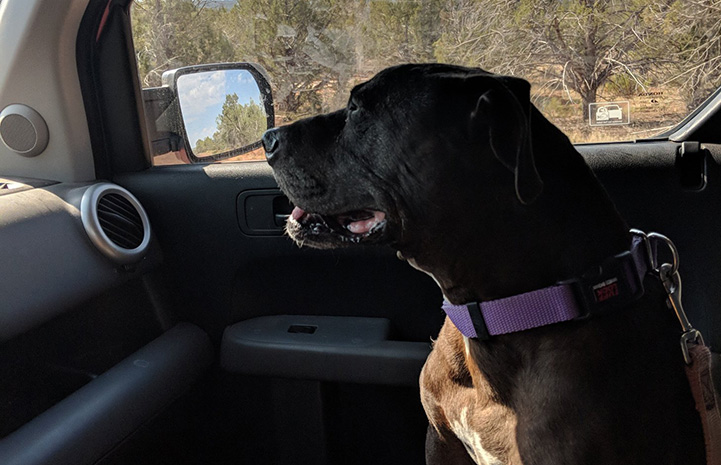 Though Mya and Curly were often thought of as a pair, the dogs had their own distinct personalities. While Curly was sort of a class clown and (especially in his younger days) would be up to shenanigans like jumping up on desks and knocking things onto the floor, Mya was more reserved. “She was always the mature one of the pair,” says Rebecca.

It was that same maturity, coupled with an incredibly kind spirit, that made Mya so good with puppies. In fact, she used to spend many of her office days helping to socialize puppies. She was the dog who caregivers would introduce to the pups to show them that big dogs aren’t scary.

“She was super mellow, and puppies would crawl all over her,” Ramsey says. “It was especially good for bottle-baby puppies who hadn’t spent much time with their mothers, to help them get used to big dogs.”

If a puppy was being rude, Mya would give a gentle, motherly scolding — enough to help the pups learn appropriate behavior, but nothing intimidating that would make them afraid. In short, she was the perfect role model.

Although Mya had retired from her role as puppy socializer, she recently visited a litter of puppies in Dogtown’s puppy preschool. “At one point, all the puppies ran past her, and although she couldn’t really run anymore, she hopped along with them for a few feet. She really enjoyed that, and she was really cute,” says Ramsey.

Dogtown caregiver Tom Williams remembers the time he spent caring for Mya, recalling that she was extremely shy at first. “But during the five years that I was her caregiver, it was a real treat to see her overcome some of her fears as she grew accustomed to life in Dogtown,” he says. “Curly was the more extroverted of the two, and she would often look to him for reassurance as they went to the dog park or out for a walk together. It is both a privilege and an honor to have been a caregiver for these dogs.”

Mya was also known for how much she loved her kiddie pool, especially when it had been freshly cleaned and filled with a few inches of water. If the water sat for more than a day or two, she would not step in it. Instead, she’d wait patiently for her caregivers to clean and refill it, and then she’d hop inside and roll around.

She was determined and dignified, too. She liked to try to do things herself (like hopping up into her caregiver’s big truck) and didn’t always want to accept help. With affection, she was usually reserved, at least in the beginning. She would ask for pets when she wanted them, but wouldn’t linger too long.

Dogtown caregiver Christina Morris says it took a while for Mya to get comfortable with people. “Once she did,” Christina says, “she would get really excited and bounce around. On days when I was closing up, if I didn’t go see her before I left, she would bark at the door. When I went inside her room, she would walk up and let me pet her for about two minutes and then she was done.” 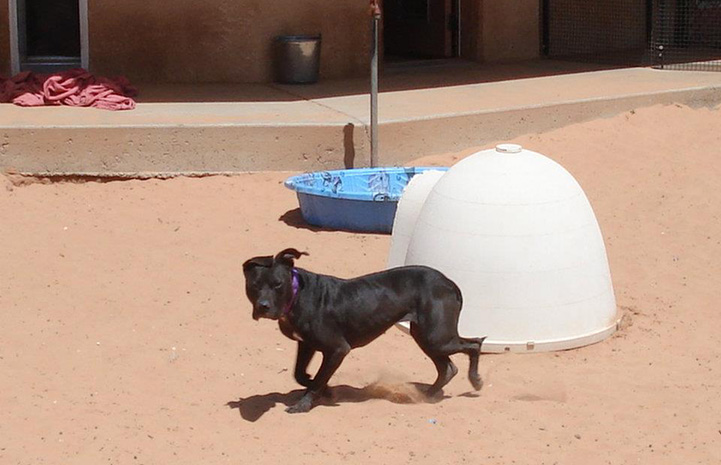 The end of a dignified life

Mya’s last day was spent with Curly by her side and surrounded by her Sanctuary family and friends, many of whom came to say goodbye. “She was very special to so many people,” says Betsy Kidder, a longtime Dogtown veterinary technician. “I will truly miss her, but I am so happy that any discomfort was short-lived, and that her passing was peaceful.”

Mya left the world the same way she lived in it — with dignity and with grace. Now that she is gone, her family and friends are rallying around her pal Curly and celebrating a life well-lived and a legacy of hope, redemption and love. 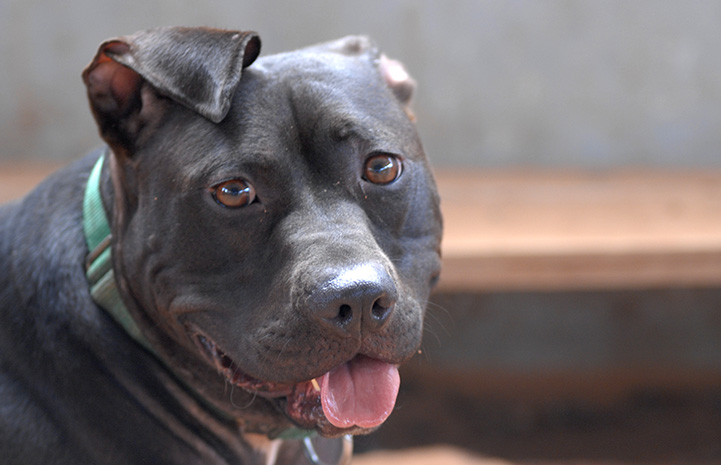