The Zen of Old Dogs

November is adopt a senior pet month.  Francis Battista shares the joys of having an older dog around the house along with some helpful tips from our Dogtown staff. 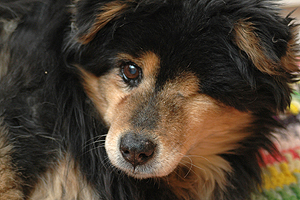 Bop is a dog. A small black and tan chow mix.

She spends most of her waking hours with her one eye glued to the crack beneath the bedroom door where she will occasionally catch a glimpse of some cat paws padding about on the other side. You know when the paws are happening because either she lets out a kind of whoop or she rolls her extra round little body on its side, waving all four paws for balance, trying to keep her eye at best cat-viewing angle.

She looks for all the world like a slightly worn out teddy bear. One black button eye is missing and one of the hind legs is a bit askew. The fur has a tattered appearance as if from years of the teddy being dragged around by generations of adoring children.

Bop is old. She spends most of her time asleep, usually not far from my desk. Watching her snoozing contentedly is one of those things that make me happy. I don't know much about her life up to the time that she came to live with my wife Silva and me and the rest of the crew. I know she had some rough times, as witnessed by her scars and loss of an eye. I guess what makes me happy seeing her just lying there is that, for her and for most of the old dogs around here, the past is the past, and now it's all OK. She is as happy as a clam.

That's one of the great things about old dogs. They are easy to please and they radiate gratitude. Sure, you can't take them on cross-country hikes. That's for the young dogs. But you can watch them sleep and you can step over them like a bunched-up throw rug that is always in the wrong place without bothering them. If you're sweeping and they don't feel like moving, well, you can just slide their bed, dog and all, to a more convenient location.

That's not to say there is no action. Occasionally they get so excited about some ordinary thing that they gambol like a lamb or do some silly puppy thing. (Despite her arthritis, Bop's short legs carry her roundness on walks with a determined blur.)

Everyone in animal rescue work knows that it's easier to find homes for puppies and kittens than it is to place older pets. We've all heard things like, "I want the dog to be my dog. I don't want to inherit someone else's problems."

Well, in addition to the adage to be careful of what you wish for, this is just plain old puppy poop. It's not people that make dogs into amazing and remarkable creatures. They are amazing and remarkable creatures. We don't love them because they can do tricks or are exquisitely mannered. We love them because, well, they've got that whole crazy dog thing hard wired into their brains and they've got humans pretty well taped, too. An old dog may not be your dog, but with a minimum of patience, you'll have a one of a kind friend.

I recall hearing a Buddhist teacher describe the exalted state of openness to which he aspired - a stage of development wherein he would have nothing to defend or protect, where the world could come and go without disturbing his being. He called this "The Old Dog State."

I think I know what he meant.

P.S. I wanted to share with you the virtues of an older dog adoption from the insider’s perspective here at Best Friends Animal Society’s, Dogtown.

The caregivers at Best Friends Dogtown say that most older dogs just want to know four things: Where's the couch, where's the yard, where's the water bowl, and when do we eat? Here's some more of their motherly (and fatherly) advice for when you adopt an older dog:

Provide the best food you can, preferably with no by-products or preservatives. Good food will help your senior companion deal with any stress that might arise from moving into a new environment.

Give newcomers a special place with their own new, comfy bed so they know that they are in their new home.

Exercise your 7- to 10-year-old dog as much as is comfortable. But don't push your 10- to 12-year-old to keep up with younger dogs. On longer walks, have plenty of rest periods. Always check with your vet.

Regular vet checks are important. Keep an eye on hips, heart, teeth, and eyesight. Stay ahead with preventive tooth care and supplements to help keep joints supple and strong.

Be patient. It may take a while for your new friend to learn new routines and it may be that you have to learn a few new routines yourself!

Teaching you new tricks. You may be surprised to see an old dog trotting out old tricks and games when he settles into his new surroundings. But if your old adoptee turns out to be more of a crotchety couch potato than a discarded gem, remember always that you are saving a life. Besides, his teeth are probably nowhere near as sharp as they used to be!

***Bop’s article first appeared in the 2000 Nov/Dec issue of Best Friends Magazine. Bop was described as “older than dirt” when she came to live with us, which clearly she wasn’t because she lived us for another eight years.