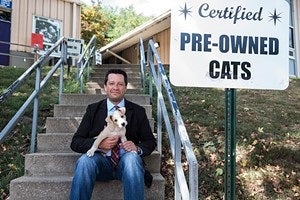 Brent Toellner is the Senior Director, Lifesaving Programs, for Best Friends Animal Society. In this role Brent oversees the Regional, Business Intelligence and Network Partner teams for Best Friends. In the role, he works with the Business Intelligence Team to understand the data on the nation's 4800 brick & mortar shelters and helps to turn that data into strategies for the Regional Teams, and how to engage the organization's 3100 Network Partners to work toward the goal of ending the killing of shelter pets by 2025. He also helped the Network Partner team to increase the volume of digital resources available as well as introduced new platform of communication to the Network.

Brent joined Best Friends in 2016 as the Regional Director of the South Central and Great Plains Regions and was responsible for connecting, consulting and collaborating with animal shelters, advocates, spay/neuter groups and rescues across the 11 states in the two regions.

Prior to joining Best Friends, Brent, his wife Michelle co-founded the Kansas City Pet Project (KCPP). In July 2011, they formed KCPP to bid on the contract to run the Kansas City, Missouri, pound - a place where, for decades, more animals died than were saved. After KCPP took over in January 2012, adoptions increased by more than 200% and helped elevate KCPP to a live release rate of more than 90% for seven consecutive years while remaining an open-admission shelter, making KC Pet Project one of the largest open-admission no kill shelters in the nation. In 2017, KCPP finished the year with a 96% Live Release Rate.